SECTION I
THE CLP REGULATION

CLP Regulation and the transport of dangerous goods

Regulations concerning different modes of transport of dangerous goods are well harmonized at global level: they were then looked at as a model for developing Globally Harmonized System of Classification and Labelling of Chemicals (GHS), (on which CLP Regulations is based). Transport regulations do not cover some hazard classes, such as germ cell mutagenicity, carcinogenicity, reproductive toxicity, having been evaluated that such hazards are not relevant in transport because in general, in case of accident, no repeated and prolonged exposure takes place. Other differences with CLP Regulation are related to the use of "building block approach". Transport labels, which were used as a basis for GHS, can be used, instead of CLP pictograms, on packages during transport.

THE CONCEPT OF HARMONIZATION

In order to discuss the relationship among CLP Regulation [1] and transport regulations it is necessary to refer to the process of harmonization started at United Nations Conference on Environment and Development (UNCED) in 1992 and completed in 2003 with the publication of the first edition of the Globally Harmonized System of the Classification and Labelling of Chemicals (GHS) [2].

The work on GHS began with the premise that existing systems should be harmonized in order to develop a single, globally harmonized system to address classification and labelling of chemicals in all sectors (workplace, consumer, transport).

It has to be underlined that the concept of harmonization is certainly not a new one.

In particular, as far as the transport regulations are concerned, harmonization among the different modes of transport was largely achieved around the world.

At its nineteenth session (2-10 December 1996) the Committee adopted a revised version of the Recommendations, in the form of "Model Regulations", in order to facilitate its direct integration into all modal, national and international regulations.

These Recommendations, which contain a very detailed set of criteria for classification and labelling of dangerous goods1 were (and are) then addressed to governments and international organizations responsible for regulating the transport of dangerous goods in order to ensure the safety of people, property and the environment and they.

It was (and is) then expected that governments and international organizations, when preparing or revising their regulations will conform to the principles laid down in these Recommendations - Model Regulations.

And indeed, looking at the main regulations covering the transport of dangerous goods, such as:

it can be easily verified that the requirements concerning aspects common to all the modes of transport (such as packaging, documentation, and, of course, classification and labelling of dangerous goods) are largely harmonized.

Transport system as a model

It was then recognized that the transport sector could be referred to as model for the harmonization: harmonization which had not been achieved at global level, in terms of classification and labelling, in the workplace or consumer or others sectors.

In particular the GHS has mutuated from the transport regulations the criteria for classification of substances which are characterized by physical hazards, i.e.:

- substances which, in contact with water, emit flammable gases;

It has to be noted that such criteria are mainly based on the results of tests performed in accordance with the procedures defined in the Manual of Tests and Criteria annexed to the UN Recommendations.

The members of the Committee were experts from different countries (the countries were identified by the ECOSOC); experts from other countries and from NGOs (non-governmental organizations) also attended the meeting without the right of vote.

Every two years (following intermediate meetings: one every six months) the Recommendations were amended to take care of the developments in technology and the needs of the users.

Taking care of this situation, it was decided to establish a similar body for the GHS.

With the Resolution 1999/65 of 26 October 1999 of ECOSOC it was decide to establish a Committee of Experts on the Transport of Dangerous Goods and on the Globally Harmonized System of Classification and Labelling of Chemicals, which is responsible for the planning and the approval of the work of two SubCommittees:

- the SubCommittee of Experts on the Transport of Dangerous Goods (UNSCETDG);

- the SubCommittee of Experts on the Globally Harmonized System of Classification and Labelling of Chemicals (UNSCEGHS);

both working in the same way as the previous Committee of Expert on the Transport of Dangerous Goods.

The GHS is then amended every two years on the basis of the proposals discussed in the UNSCEGHS.

This structure allows that the amendments to GHS are evaluated in parallel by the UNSCETDG so that transport regulations are harmonized with GHS.

The main difference is concerning the health hazards.

In transport regulations hazards such as germ cell mutagenicity, carcinogenicity, reproductive toxicity, etc., are not considered.

The reason for that can be found in the initial approach used for defining the relevant hazards in the transport sector.

It was assumed that the hazards from transport, due to the specific conditions of the transport itself (a transport unit in movement, a quantity of dangerous goods "limited" with respect to the quantity available in fixed installation, an easier way for people of going far from the accident), are characterized by a "short" exposure of the people involved in some accident.

And it was then assumed that hazards like carcinogenicity, etc., can be a serious problem only in the case of repeated and prolonged exposure (which, as said, is not the case for transport accident).

It has to be noted that these assumptions (which however have never been consolidated in a formal text) have been questioned in the last years.

Reference was made, for example, to some results which give evidence to the development of cancer after a single exposure.

Some countries (in particular Italy) have asked for inclusion of carcinogens, mutagens, etc. in the transport regulations, but, up to now, the majority of the members of the UNSCETDG didn't agree with such proposal.

For the health hazards covered by transport regulations (i.e. acute toxicity and skin corrosion) the harmonization with CLP however is not complete.

First of all, on the basis of the "building block approach", the hazard from acute toxicity is limited to Categories 1, 2 and 3 (and, as recognized by GHS, the classification for toxic by inhalation substances is based, in transport regulation, also on the evaluation of volatility).

As far as corrosion/irritation is concerned, up to now transport regulation are considering only skin corrosion and the criteria are only based on test results: however discussion is going on in the UNSCETDG to achieve a higher level of harmonization with GHS/CLP.

Substances hazardous to the environment

The situation for substances hazardous to the environment is still evolving towards a higher level of harmonization, the delay in such process being caused by the pre-existing major differences between modal regulations.

One main difference among CLP and transport regulations, looking to the substances hazardous to the aquatic environment, is deriving from the application of the "building block approach": only Category acute 1, chronic 1 and chronic 2 are covered by transport regulations.

On the other side it is relevant to note that, in order to facilitate the duties of shippers of dangerous goods, in the European land transport regulations (ADR/RID/ADN) a clear reference is made to CLP so that a substance classified as hazardous to the environment in CLP is classified in the same way in ADR/RID/ADN.

It has also to be noted that up to now no reference is made in transport regulations to substances hazardous to the ozone layer.

Some differences in respect of CLP are deriving, also for physical hazards from "building block approach". For example, in the case of flammable liquids, only Categories 1, 2 and 3 are covered in transport regulations.

It is relevant to note that in transport regulation other hazards are considered, which are not covered by CLP (and GHS).

It is the case of:

While labels, according to CLP, are meant to contain several information (pictograms, signal words, hazard and precautionary statements, etc.), in the "language" of transport regulations labels are what in CLP is defined as a pictogram.

Due to the fact that CLP pictograms were derived from the transport label (of course for hazard classes and categories covered by transport regulations), there was no need to change the existing system of labelling for the transport.

So, in the case of a packaging used for transport, for hazard classes and categories covered by transport regulations, the transport label is used and the CLP pictogram is unnecessary.

For example, on a drum containing flammable liquids (Category 1, 2 or 3), the transport label shall be placed on a drum: while the CLP pictogram is not requested (Figure 1). 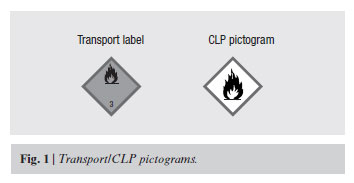 Submitted on invitation.
Accepted on 12 April 2011.