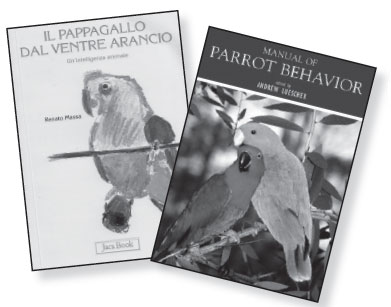 The extraordinary abilities of parrots to repeat words and voices of the human language and the flashy plumage colors of many species of them have made these birds among the most popular pets of the Aves taxonomic class. We like them because they are social creatures, yet we frequently keep them as solitary birds so they will redirect their affection toward us. However, our relationship with parrots has changed greatly over time. Once considered as exotic and instinctive jesters unable to understand the meaning of words and actions they produce mechanically, actually many studies have shown their remarkable cognitive abilities (abilities that have ensured them the epithet of "avian primates"). Although scientific interest in parrot behavior is growing, knowledge in this area is still limited.

Massa's book reflects the romantic experience of an intuition. The text proposes, with considerable expertise, the autobiographic story of a naturalist who wants to demonstrate his idea about the human monopoly on the complex use of abstract communication: "...animals think and parrots, when they speak, they know exactly what they say"(...)"My project is to record and analyze the voices of different species, to interpret the meaning of the main sounds in the various circumstances of life from different individuals (for example alarm, lure, courtship, demand for food, etc.) and then to compare them with each other to see if they are modified only with the evolution of different species or even with the cultural evolution within each species".

With a wealth of details the author tells about his travels around Africa and he describes his work with the rufiventris specie observing their daily habits both in wild (Tarangire) and in captivity (Milan). Comparing behavioral and bioacoustics data from parrot pairs this research suggests how their sounds are composed by singular syllables, or different combinations of them, that are used as ideograms in their simple communication.

Previous studies in the 1980's had already demonstrated the surprising cognitive abilities of an African grey parrot. The American researcher Irene Pepperberg and her colleagues have tried to show that Alex was able to differentiate the meaning and syntax, so that its use of voice was different from the relatively rigid forms of communication "instinctive" which is popular in the animal kingdom. Results obtained from Massa's research seem to confirm what has been observed earlier by broadening the question to other parrot species and to the wild context. In addition, the text provides information about the phylogeny of different African parrot species, especially for the Poicephalus taxonomic genus, their geographical distribution and ecological needs, becoming a potential manual for breeders and lovers of these species. Advancement of knowledge about their behavior has an important role in management of protection of wild endangered populations as to improve their welfare in captivity.

Andrew Luescher has collected and edited in 2006 (Blackwell Publishing) the researches and experiences of some from the top experts on parrots. His book Manual of Parrot Behavior (first edition) is the first of its kind and provides a comprehensive view of behavioral and clinical aspects of this taxonomic order (Psittaciformes) of birds. "Bringing together a host of international experts on avian behavior, Manual of Parrot Behavior explores the many facets of psittacine behavior, both normal and abnormal. The book not only provides readers with a solid understanding of the basic principles of psittacine behavior but also offers useful techniques of diagnosis and treatment for specific problems" (from the back cover). The chapters supplement the practical owner's experiences with logical and well thought-out explanations as to why parrots react and behave the way they do. Would highly recommend to anyone who owns (or is thinking of acquiring) a parrot, since they require far more attention than more conventional pets (such as dogs and cats).

The problem of captive parrots welfare is actually an important and highly topical ethical issue. In fact, the trade in parrots has grown enormously in recent decades and more and more animals being requested and popular as pets. In light of this interest, ensure a good level of well-being in captivity is not an easy target. Individuals of larger species can live for over 70 years in captivity and their environmental needs, as opportunity of social interaction, may become cause of serious illnesses if not satisfied and cause the occurrence of abnormal and self-injurious behaviors. In the wild, parrots exploit their cognitive and physical abilities to adapt to their dynamic environment. The captive condition is very different from that experienced by animals in wild. For example, a resource such as food is easily accessible and always available because it is provided regularly by farmers. The nesting site is required by farmers which also create "artificial" groups of them and remove predators. When compared with the wild, the captive environment is most limiting in terms of space, complexity and behavioral opportunities. This"paradox of life in captivity" is causing a conflict between parrot and environment.

The comment of D. Donovan (editor and senior reviewer of California Bookwatch) about this book is quoted here: "Any veterinary library or holding specializing in pets - even at the public library level - will want to have Manual of Parrot Behavior in the collection: it is the first detailed reference of its kind to provide a survey by international experts on parrot behavior under one cover. Here are keys to both normal and abnormal parrot behavior, techniques on treating common problems, and checklists of tameness and other scores. Invaluable"!

These two books are important because parrots are increasingly used in Europe and in other western countries as pets. Therefore any translational effort aimed at implementing welfare regulations for them (already enforced for vertebrate experimental and farm animals) is therefore advisable.