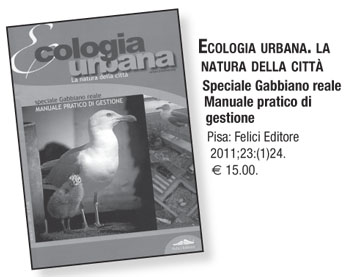 In areas such as the inner part of Rome, where archeological remains are of paramount importance, marble parts of ancient sculptures or other important historical manufactured goods could melt, because of the level of acidification of the birds' faeces. Due to their large dimensions, seagulls are among the most dangerous species in terms of provoking irritating reactions among local human inhabitants of urban and periurban areas where the birds have successfully colonized. Zooanthropologists and experts of animal welfare strongly encourage any kind of interactions between vertebrate and invertebrate urban species and the local human population.

After an introduction presenting the morphological characteristics, habitat occupation, feeding style, and reproductive behaviour, the following section covers the zoogeographical distribution of the herring gull species in Italy. The present status of recurring episodes, in urban areas of Italy, is enlisted.

The introductory part ends with zooanthropological considerations and regulatory aspects.

The booklet thus briefly and critically reviews the most common ways of controlling gull presence. It very usefully addresses important issues such as active promotion of educational and outreach initiatives to render the urban citizens more culturally prepared to interact with gulls in general. Among not recommended ways of regulating gull populations are falconry methods or capture/suppression strategies.

The final part summarizes a few relevant considerations about how to deal with gull nestlings.

This pocket-size book should be known and read by all stakeholders dealing with urban "pest" species, veterinarians, local administrators, behavioural biologists, ethologists, zooanthropologists. Finally, committed bird-watchers, as well as amateur ornithologists, should make good use of such a book.