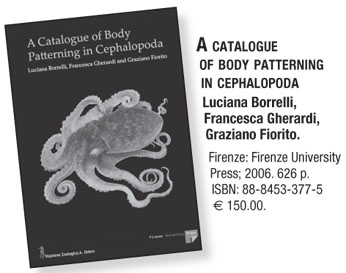 The regulatory change occurred last year in the European legislation on the protection of animals to be employed in experimental procedures makes this amazing book really relevant. In fact, on the 8th September 2010 European Parliament has enacted a new Directive on the protection of animals used in scientific procedures [1] that states "live cephalopods are among the animals falling within the scope of the Directive".

This new legislative aspect is the consequence of the awareness raised by experiments performed with octopus showing unexpected cognitive abilities of this animal. In the scientific community, the presence of cognitive abilities is commonly associated with the possibility of experiencing sufferance, including psychological suffering, pain and "distress". As result of that, guidelines for proper accommodation and use of cephalopods are now available and pretty soon researchers willing to carry out studies on these species will have to provide written justifications to motivate their experiments. Further, harder job will be for veterinarians and/or "inspectors", which will have to evaluate psychophysical suffering of those behaviourallycomplex molluscs.

This catalogue of vivid, sometimes picturesque accounts is actually a timely guideline (despite its format is far from being a pocket-size book, with its 623 pages and 34 x 25 x 5 cm format). It enlists the most complete collection of cephalopodian coats: their sudden changes in external coloration due to a rather peculiar series of mechanisms and processes dropped by their very long phylogenetic history. Mechanisms essentially based on a complex system and sub-system of chromatophores regulated by a reticular fine-grained arrangement of nerve-ending. Andrew Packard, a top expert, explained those aspects by a competent and brilliant dissertation in [2].

The vividly and easily understandable Plate 1 on page 387 allows any reader to translate inner "emotional states" of Sepia officinalis in extended coats, particularly when combined with Plate 3 (page 389), depicting both postures (tentacle position).

Also papilloted skins of both cuttlefish and squid are a sort of "Rosetta stone" for any human observer professionally interested in understanding their psychophysical reactions. The part concerning octopus is maybe the most exciting, given the present knowledge on its cognitive capacities and harmonic body and tentacle postures.

Plate 61, as well as Plate 67 (the Bishop-Shaped Plate 73 for all skilled readers) will possibly render well-being of octopus no more a matter of a critical discussion, but indeed an observable, scorable and psychophysically cogent event.

Sympathy and celebrated artistic resemblance of this latter species do facilitate the enjoyable reading of this large and rather complete section of the book.

A few more examples of the legends to the pictorial part are:

Hanlon et al. (1994). A dark longitudinal stripe expressed mid-dorsally that "varies in width from a few millimeters to one-third of the mantle width. It is thought to aid in crypsis through counter-shading when viewed laterally and through disruptive coloration when viewed from above" by hiding conspicuous organs like the ink sac, oviductal gland or testis. Dorsal stripe can act alone as a body pattern and is seen, as clear, in "calm" squid.

Roper and Hochberg (1988). "With increasing disturbance ... the animal flushes to a uniform dark charcoal or slate grey and the Iridescent blue lines and rings become very intense surrounded by maculae of very dark chromatophores. In this pattern the Primary papillae may be erect and prominent". The mantle and head white spots are "subdue to absent", occasionally, the Frontal white spot may still be visible.

In sum, this catalogue of body patterning so precisely described in full details could represent an irreplaceable practical instrument for any official involved in monitoring the well-being of those delicate yet now formally "sentient" molluscan species. In this period, before the Directive is enforced, major scientific academic institutions and research centers hosting cephalopod colonies and studies have to set up local regulations to face this regulatory change.

Behavioural biologists and ethologists in turn will have necessarily to treat differently cephalopodian species as well as inspectors and veterinarians in charge of aquaria in animal facilities or research centres.

When associated to emotional states on a single or more individuals in captivity, any veterinarians observing the animal in its tank could be able to score its eustress or distress level, likely using a standard stimulation to trigger a reactive response, in turn a reliable score of general arousal.

We finally refer to a recent book review of another relevant meaningful text [3] and to the seven websites quoted in the final pages of [2] and to (www.euroceph.org).