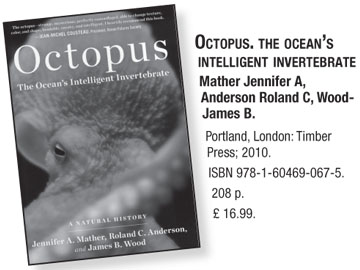 It could seem an extravagant choice for a public health journal to review a book on octopus. However this book, with its elegant appearance, including the wonderful cover picture showing the "intelligent" glance of the octopus, represents a nice and timely overview on the cognitive capabilities of this amazing cephalopod species. It is authored by Jennifer A. Mather, a leading scientist on animal personality, professor at the University of Lethbridge in Alberta, where she teaches a variety of human and social psychology courses. The second author, Roland C. Anderson, is a Seattle-based biologist; while the last one, James B. Wood, is an outreach expert in a major aquarium and an accomplished underwater photographer.

The relevance of this book for public health in general resides primarily in a major change occurring on these days in European legislation on the protection of animals used in experimental procedures. Following in fact a norm implemented in the UK already several years ago (the Animals Act Order 1993), the new Directive states in Article 1 (3b) that live cephalopods are among the animals falling within the scope of the Directive. Such Directive will have to be enforced by Member States before January the first 2013 [1].

This legislative step follows the awareness raised by cognitive experiments performed with octopus, which showed unexpected cognitive abilities (among these studies, we want to remember the studies by Graziano Fiorito at the Stazione Zoologica Anton Dohrn, in Naples). Generally speaking, remarkable cognitive abilities are thought to be linked with the possibility of experiencing significant level of sufferance, including psychological suffering. These considerations have moved European politicians to embrace the British norm at European level. Therefore, experimenters willing to carry out studies on octopus, cuttlefish or squids will soon have to provide written justification to motivate their experiments, while veterinarians will have to evaluate psychophysical suffering of these molluscs.

Furthermore, scientists coming from different areas of expertise and provided with a Darwinian perspective, such as zoologists, comparative psychologists as well as evolutionary-minded neurophysiologists and some psychiatrists and neurologists, do remember that for ages Planet Earth was ecologically dominated by terrestrial vertebrates, mainly reptiles, while cephalopods (extinct ammonites), with their (likely) complex behavioural patterns, inhabited for a very long time seas and oceans. Octopuses are the living remains of this ancient, yet noble, lineage. Indeed, it does not come as a surprise that their behavioural patterns were considered at the same level of sophistication from the European Parliament. Mammals-like reptilians originated mammals and homination process led primates to sprout the genus Homo, presently the highest priority in today biomedicine.

In this book, chapter 8 (Personalities) and chapter 9 (Intelligence) could convince the readers that the octopus could be a possible ambassador for other invertebrates to be protected when used in experimentation (first-in-line crustaceans for their evocative lobster), and could deserve such a level of protection [2].

Chapter 9 underlines that "intelligence is not only about getting but also using information [...] much of the octopus's daily survival is based on getting information and using it well" (p. 123). It touches critical arguments such as spatial memory (citing nicely Nobel laureates Niko Tinbergen's work [3], (p. 124) and learning, with a lucid reasoning about constraints and selectivity of learning (p. 127-135). Octopus reaction on the "mirror test" (p. 133-134) although still missing, should be explored in terms of species-specific characteristics and evolutionary preparedness in neurosensory, motor and cognitive patterns, results of specific niche demands having ultimately shaped the phenotypic behavioral traits in any single vertebrate or invertebrate species. This represents a rather unique point of view, and makes it a definitely original contribution to the present-day debate. A critique of ethologist and bioethicist Mark Bekoff, not enlisting the octopus in his book on the Cognitive animal [4], deserves attention.

The Personalities chapter enlarges the discussion to the personality or temperament dimension in animals. After describing their excellent work tracing personalities in octopuses, authors state that octopuses should be considered along with "higher" animals, for which variation in personality dimensions (such as shyness, activity, reactivity) are taken for granted. In this book the octopus is considered like a "thinking and anticipating being", a "spineless smart" animal which, with his "beautiful mind" [5], is an important part of the sea's complex web of life.

Last but not least, the final seven websites, enlisted just before the well-arranged index, are worth being carefully navigated: for the emotions they stimulate they remain a cogent, expanded, part of the published text.

In sum, despite a few points where the narrative style resembles the one of a coffee-table book, this volume remains a nice contribution to a hot topic issue that has seen invertebrate species among sentient animal deserving special protection.