Molecular epidemiology of measles virus in Italy during 2008

INTRODUCTION. In view of the goal of measles elimination, it is of great importance to assess the circulation of wild-type measles virus (MV). Genetic analysis is indispensable to understand the epidemiology of measles. A large measles outbreak occurred in Italy in 2008, with over 4000 cases reported to the enhanced measles surveillance system introduced in 2007, 37% of which were laboratory confirmed.
METHODS. Urine and saliva samples were collected during 2008. A phylogenetic analysis of measles sequences was performed in order to understand the epidemiological situation of wild-type (MV) circulation in that period.
RESULT AND DISCUSSION. Data showed predominant circulation of the genotype D4. Genotypes A, D8, D9 and H1 were also detected in a small number of samples, probably representing imported cases.

Globally, measles morbidity and mortality rates have dramatically declined since 1963, thanks to the availability of a safe and effective vaccine and the implementation of enhanced vaccination strategies. Nonetheless, measles remains a leading cause of childhood mortality worldwide, with an estimated 164 000 measles deaths in 2008 (a 78% reduction compared to mortality in 2000) [1, 2]. Interruption of indigenous transmission of measles virus (MV) has been reported in the Americas and in several countries [3, 4]. However, measles cases continue to be reported even in those countries with high vaccination coverage, following the importation of the virus from endemic regions.

In the World Health Organization (WHO) European Region, measles has been targeted for elimination by 2015 [5].

In Italy, the incidence of measles declined since the introduction of the combined measles-mumps-rubella (MMR) vaccine but large outbreaks continue to occur. A national elimination plan was first approved in 2003 with the aim of achieving measles elimination by 2010. Measles vaccination coverage increased from 83.9% in 2003 to 90.1% in 2008, and 90.6% in 2010. Following a period of very low incidence (< 1 case/100 000 inhabitants in 2005 and 2006), Italy faced a resurgence of measles starting in September 2007 [6]. A new elimination plan was approved in March 2011 targeting measles elimination by 2015 [7].

Genetic characterisation of wild-type MVs, combined with epidemiological data, helps to document transmission pathways and to illustrate the progress made towards measles elimination, by differentiating indigenous and imported viruses.

Genetic characteristics of representative wild-type MVs, identified in Italy during the year 2008, were analysed in this study.

An enhanced surveillance system was introduced In Italy in 2007 [8], to improve timeliness, completeness of case reporting, and case investigation, including laboratory confirmation of diagnosis. According to this system, physicians are required to report all suspected measles cases to the local health authorities within 12 hours (as opposed to within 48 hours in the statutory notification system). For each suspected case the local health authorities are required to carry out an epidemiological investigation, including obtaining specimens for laboratory confirmation and genotyping, and to complete a standard measles notification form, which is then to be sent to regional health authorities. The regional authorities forward the forms immediately to the Ministry of Health and to the Infectious Diseases Epidemiology Unit of the Italian National Institute of Health (Centro Nazionale di Epidemiologia, Sorveglianza e Promozione della Salute -CNESPS, Istituto Superiore di Sanità, ISS). Moreover, a National Reference Laboratory (NRL) of the ISS confirms outbreaks/cases by IgM serology and/or by viral RNA detection, and determines the measles virus genotypes for molecular epidemiological purposes.

The WHO currently recognizes eight clades (designated from A to H), and within these clades, there are 23 recognized genotypes. The WHO also recommends a region of 450 nucleotides, coding for the carboxyterminal 150 amino acids of the nucleoprotein (N-450), as the minimum amount of sequence data required to assign a measles genotype [9].

Specimens. Oral-fluid specimens were obtained by the salivary swab. Saliva was collected after centrifugation at 1500 rpm for 10 minutes, and then stored at -20 °C until tested. Urine samples were collected within 7 days of rash onset. Urine sediment was obtained after centrifugation at 1500 rpm for 10 minutes, washed two times in sterile PBS, and resuspended in a final volume of 0.5-1 ml. Sediments were stored at -80 °C.

RT-PCR amplification and sequencing. Total RNA was extracted using QIAmp Viral RNA Mini Kit (Qiagen) for saliva samples and RNeasy mini Kit (Qiagen) for urine samples, as per the manufacturer's protocols. Nucleic acid was tested by RT-PCR using a hemi-nested protocol directed to a highly conserved part of the MV RNA, which is located on the N gene.

Genomic sequences of reference strains used for genetic analysis of wild-type measles viruses, were obtained from database by accession number [11, 12]. Nucleotide sequences were aligned with the CLUSTAL W (BioEdit) software [13]. Phylogenetic trees were constructed using the nucleotide Kimura-2 parameter and the neighbor-joining method. Bootstrap analyses were performed through 1000 resampling of the data sets. The neighbor-joining method [14] was implemented by using MEGA-4 [15].

The sequences had been submitted to GenBank, and the corresponding accession numbers are given in Table 1. 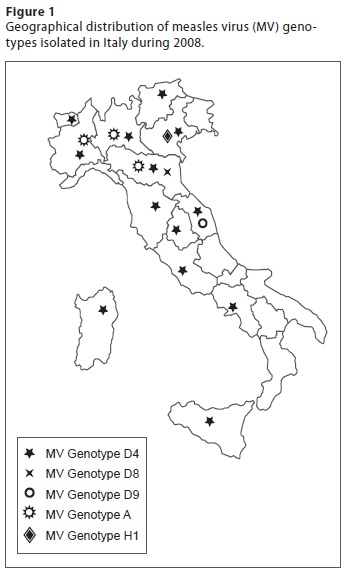 Genotype A was isolated in the regions of Piedmont, Emilia Romagna and Lombardy. A comparison of the Italian A MVs genotype with those deposited in GenBank revealed a close relation with the Schwarz vaccine strain, as well as with the wild-type genotype A strain (Figure 2). Further analysis will be performed to establish whether they are vaccinal cases.

Both D9 and H1 had never been reported in Italy previously.

While certain genotypes, such as A, D8, D9 and H1, were identified in only a few regions, the distribution of genotype D4 was isolated from 13 Italian Regions (Figure 1).

In summary, MV D4 strain was endemic in Italy during 2008 and caused a large outbreak in the Piedmont Region. Phylogenetic analysis indicates that the first case reported in the Piedmont Region was imported from the United Kingdom in 2007. This shows the importance of international efforts in controlling measles transmission in Europe [16].

Genetic characterization of wild-type MV provides a means to study the transmission pathways of the virus and is an essential component of laboratory-based surveillance. In particular, genetic data can help confirm the source of the virus, may suggest a source for unknown-source cases, and may establish links, or lack thereof, between imported cases and outbreaks.

Virological surveillance will therefore become increasingly important to document the interruption of endemic measles transmission in Italy as in the European Region.

The authors thank the staff at regional and local health authorities for providing clinical specimens. This work was partly supported by a grant from Italian Ministry of Health-CCM "Sorveglianza di laboratorio di malattie virali prevenibili da vaccinazioni e rinforzo del Piano di eliminazione del morbillo e della rosolia congenita". All named authors have read and agreed to the submitted version of the manuscript, and declare not to have any potential conflict of interests.

Conflict of interest statement
There are no potential conflicts of interest or any financial or personal relationships with other people or organizations that could inappropriately bias conduct and findings of this study.

Molecular epidemiology of measles virus in Italy during 2008

On page 50, the sentence "The regional authorities forward the forms immediately to the Ministry of Health and to the Infectious Diseases Epidemiology Unit of the Italian National Institute of Health (Dipartimento di Malattie Infettive, Parassitarie ed Immunomediate, Istituto Superiore di Sanità, ISS)"

should be replaced by