INTRODUCTION: The European Regional Office of the World Health Organization (WHO/Europe) developed a strategic approach to stop the indigenous transmission of measles in its 53 Member States by 2015. This study describes the measles laboratory surveillance activity performed by the National Reference Laboratory for Measles and Rubella at the Italian National Institute of Health (Istituto Superiore di Sanità) during 2010.
METHODS: Urine, oral fluid and capillary blood samples from 211 suspected measles cases arrived to the NRL from different regions of Italy for confirmation of the clinical diagnosis. Serological and/or molecular assays were performed; after molecular detection, positive samples were sequenced and genotyped.
RESULTS AND DISCUSSION: 85% (180/211) of the specimens were confirmed as measles cases and 139 of these were analyzed phylogenetically. The phylogenetic analysis revealed a co-circulation of D4 and D8 genotypes for the reviewed period.

Since 2001, the World Health Organization (WHO) has developed strategic plans to ensure global reduction in mortality from measles and make progress towards the interruption of its transmission. For the WHO European Region the interruption of indigenous transmission was initially expected by 2007 and the certification of the elimination by 2010 [1, 2]. In September 2010, the WHO Regional Committee for Europe set the displacement of the goals of elimination of measles and rubella and the reduction of cases of congenital rubella by 2015 [3]. The regional committee drew attention to the need to renew the political commitment, resources and actions to achieve these objectives.

Globally, measles morbidity and mortality have been dramatically reduced since the implementation of enhanced vaccination strategies [4, 5], and the interruption of indigenous transmission of measles virus (MV) has been reported from several countries [6-8]. Furthermore, large outbreaks continue to occur in countries with high vaccination coverage after the importation of the virus from endemic regions [9-11].

In Italy, the goal of measles elimination was first fixed in 2003 with the National Plan for the Elimination of Measles and Congenital Rubella (PNEMoRc) with the final target to achieve and maintain the state of elimination at national level [12]. Measles vaccination is routinely delivered as a trivalent vaccine against measles, mumps, and rubella (MMR) offered free of charge, but the coverage levels are still below the target levels in most areas, and several outbreaks have been occurring since the beginning of 2010 in various Italian regions [13, 14].

In February 2011, Italy reiterated PNEMoRc, following the WHO Committee indications, to reach measles and rubella elimination by 2015. Then, the role of National Reference Laboratory (NRL) at the Italian National Institute of Health (Istituto Superiore di Sanità, Rome) in supporting cases ascertainment, confirming outbreaks/cases and determining MV genotypes was reconfirmed.

This article describes the laboratory surveillance activity performed by the Italian NRL during 2010.

A case of measles was defined as one that met the clinical case definition (clinical picture compatible with measles, i.e. a generalized rash lasting more than three days and a temperature >38.0 °C, with one or more of the following symptoms: cough, coryza, Koplik's spots, conjunctivitis.

Urine, oral fluid specimens and dried blood spots collected within 10 days from the onset of the symptoms are the most suitable samples for the measles diagnosis, since they are used for both confirmation of the cases and molecular characterization. NRL provided sampling kits to the Italian local health authorities in order to collect these specimens.

Samples were collected in different Italian regions from 211 patients with clinical signs of measles, and sent to the NRL for confirmation of the diagnosis. Before collecting samples subjects, or their parents in case of children, had to sign the "informed consensus".

NRL's tests for confirmation included specific IgM antibodies detection in blood samples by enzyme-linked immunosorbent (ELISA) assay, molecular detection and genetic characterization of MV by PCR assay on urine and/or oral fluid samples. Urine and oral fluid specimens were collected as previous described [15, 16], and the tests were performed under the indications of the National Plan of Elimination of Measles and Congenital Rubella (Manual for the laboratory diagnosis of measles and rubella infections). Three circles of 6 mm ø, containing capillary blood, were punched-out from a dried blood spot and used for the ELISA assay (Siemens, Germany) [17].

Total RNA was extracted from urine sediment using RNEasy Mini Kit (Qiagen) and from oral fluid using QiAmp Viral RNA Mini Kit (Qiagen), according to the manufacturer's instructions. Two rounds of PCR amplification were performed on a highly conserved region located on the N gene of the MV genome, as previous described [15, 18]. PCR products were sequenced by Macrogen DNA Sequencing Service (http://dna.macrogen.com) and sequence data about the 450 nucleotides that code for the carboxy-terminal 150 amino acids of the nucleoprotein (N) were analysed phylogenetically. Phylogenetic analysis and tree reconstructions were performed with MEGA software version 6.06 [19]. Virus isolates and genotypes were named according to the new official WHO nomenclature [20, 21].

Clinical samples from a total of 211 patients with suspected measles infection arrived at NRL from different regions of Italy to confirm measles diagnosis by serological and molecular assays (Figure 1). Measles infection was confirmed for 180 of them. 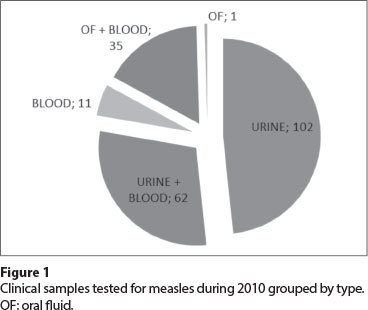 The results obtained with different assays are shown in Table 1. Age distribution for 137 out 180 confirmed cases for which the data of birth was available is shown in (Figure 2). Urine samples were available for 164 patients, for 62 also the blood sample was available. Of the latter, 49 were positive both in PCR and ELISA assays; 2 were PCR positive and IgM border line, 3 patients were IgM positive but PCR negative. Samples from 8 patients were negative in both PCR and ELISA assays. Of the 102 patients for which only urine sample was available, 86 were positive. 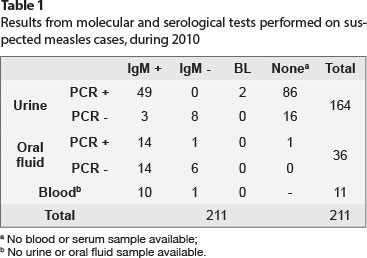 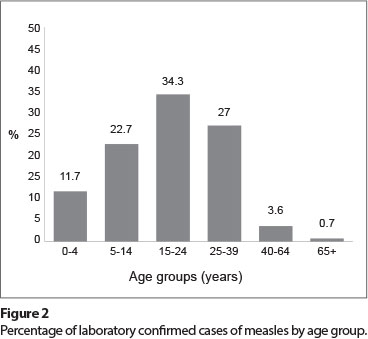 Oral fluid samples from 36 patients were tested, and for 35 of these the blood sample was also available. Four-teen samples were positive in both PCR and ELISA assays; 1 was PCR positive and IgM negative, 14 were IgM positive and PCR negative. Samples from 6 patients were negative in both PCR and ELISA assays. For 1 patient only the oral fluid sample was available and it was PCR positive.

For 11 suspected cases only the blood sample was available, and the ELISA result was positive for 10 of these.

In summary, during 2010 NRL received samples from 211 patients. The number of samples received and their distribution by type are shown in Figure 1. A total of 62 suspected measles patients with both blood and urine samples were tested and 54 were confirmed. A percentage of 90.7% (49/54) was positive by both PCR and ELISA tests; 3.7% (2/54) was positive only in PCR and 5.6% (3/54) was positive only ELISA. Then, PCR on urine showed a samples positivity rate of 94.4%, and the total samples positivity rate in ELISA was 96.3%.

MV's genome was found in 153 samples (urine or oral fluid). After viral detection, 139/153 were sequenced for viral characterization in order to attempt the current MV genotypes circulating in Italy. Phylogenetic analysis revealed a steady co-circulation of genotypes D4 and D8 during the reviewed period.

In September 2010, WHO European Region countries renewed their commitment to the elimination of indigenous transmission of measles by 2015. Thanks to continuous efforts by Member States to maintain high vaccination coverage, measles diseases generally showed declining trends. Although, Europe continues to fight measles outbreaks [22, 23].

During 2010, a total of 3011 measles cases, including confirmed, possible and probable cases, were reported in Italy to the enhanced measles surveillance system, with a notification rate of 5.0 per 100 000 population. A total of 1095 cases were classified as confirmed (36.4%). Then, the elimination of indigenous transmission of measles by 2015 remains a major challenge for Italy as well as for the other European countries.

To interrupt the circulation of the virus, in addition to improving vaccination coverage (≥ 95% with two doses of vaccine), public health priorities include strengthened surveillance systems and effective outbreak control. Laboratory measles surveillance is an important tool in measles elimination, since a prompt and accurate laboratory diagnosis is essential for cases detection, outbreak management and ongoing surveillance in countries with low incidence. Moreover, the laboratory surveillance for measles and rubella, including genetic characterization of wild-type viruses, permits to illustrate the progress towards measles elimination by differentiating viruses between indigenous and imported. Major efforts by public health will be needed to meet the target of elimination by 2015, especially regarding the laboratory virological surveillance.

The project participants all contributed significantly to the results of this study.

All named authors have read and agreed to the submitted version of the manuscript, and declare not to have any potential conflict of interests, or any financial or personal relationships with other people or organizations that could inappropriately bias conduct and findings of this study.

1. World Health Organization - Regional Office for Europe. Strategic plan for measles and congenital rubella infection in the European Region of WHO. 2003. Available at: www.euro.who.int/__data/assets/pdf_file/0020/79022/E81567.pdf.

2. World Health Organization. Resolution, renewed commitment to elimination of measles and rubella and prevention of congenital rubella syndrome by 2010 and Sustained support for polio-free status in the WHO European Region. Moscow, Russia: WHO Regional Office for Europe; 2010. Available at: www.euro.who.int.