INTRODUCTION: Physical activity, diet plans, the mantainment of a certain Body Mass Index (BMI) and the use of various types of supplementation are common elements in the search for disease prevention, health promotion and well-being.
MATERIALS AND METHODS: We analyzed the data regarding Italian university students' BMI, dieting behaviour, personal body perception, exercise habits, and use of dietary supplements and of doping substances.
RESULTS: 13.7% resulted being underweight, 75.1% was in the normal range, 9.8% was overweight, and 1.4% was obese. 11.0% were on a diet. 25.8% of the students reported never doing any type of physical activity. 0.9% admitted consuming doping substances. The percentage of overweight/obese students increases from 8.8% of the 18-21 year olds to 18.1% of the 25-30 year olds. Similarly, the prevalence of overweight/obesity was 18.5% among male population and 7.5% among the female one.
DISCUSSION: The data deriving from this questionnaire showed that while the majority of university students has a BMI in the normal range, 11.2% of the study population is overweight/obese. Males present a higher risk of being overweight or obese. An important part of the population showed to be sedentary even though data coming from our study are aligned to further evidence.
CONCLUSION: The most important concern arising from the questionnaire is represented by physical inactivity. Indeed, it is necessary to encourage and plan initiatives aimed at promoting physical activity in university students.

Physical activity, diet plans, the mantainment of a certain body mass index (BMI) and the use of various types of supplementation are common elements in the search for disease prevention, health promotion and well-being. However, an individual's understanding of these elements is influenced not only by information deriving from the medical world, but also from social norms and subjective perceptions.

Adolescents and young adults find themselves in a developmental period which is critical for the structuring of self-identity and the university social environment also strongely stresses the awareness of "social norms" related to physical attractiveness and appearance in general [1]. In young adults, the perception of the cultural norm for physical attributes is a fundamental factor in the interpretation and level of satisfaction as regards to their own physical appearance [2]. The interpretation of body image norms seems to differ between female and male university students. In fact, females overestimate the extent to which other females want to be thinner and believe males to find thinner females to be more attractive than what males actually find attractive. On the other hand, males believe females prefer larger or more muscular males compared to what females actually find attractive [3, 4]. As a consequence, females have shown to be predominantly concerned in achieving thinness, while males seem concerned about both weight and muscularity [5, 6].

Self body image is a very important factor. In fact, even though studies have shown that there is no significant relationship between body image dissatisfaction and BMI [7], body image dissatisfaction is in itself a relevant predictor of the development of eating disorders and/or risky body-change strategies. Some examples of pathological conditions which extend beyond a normal search for health and wellness are eating disorders, orthorexia and muscle dysmorphia. Eating disorders, which are psychiatric illnesses defined by abnormal eating habits, include conditions such as anorexia nervosa, bulimia nervosa and binge eating disorder. Studies in university students that study certain subjects showed that the prevalence of these conditions was 9.1%, 25.9% and 5.9%, respectively [8]. Orthorexia is a term used to characterize an excessive and time-consuming preoccupation for healthy eating. In some cases, it can determine very restrictive diets and social isolation. Muscle dismorphia is an obsessive-compulsive disorder characterized by the obsession of not being sufficiently muscled, which involves the use of excessive diets and dietary supplements, use of anabolic substances and excessive physical exercise [8]. While orthorexia seems to interest equally males and females, females tend to have a higher risk for traits of eating disorder while males showed a higher risk for muscle dysmorphia [9].

The most commonly used dietary supplements are multivitamins, minerals, proteins, aminoacids. Some studies do not provide strong evidence for benefical effects of vitamin and mineral supplements, others give encouraging evidence of health benefits while others evidence some related risks [10]. As for protein supplementation, some studies show that they do promote muscle hypertrophy and muscle strength, yet only in case of relatively high duration, frequency and volume of training [11].

A different issue is represented by doping substances, a term used to indicate illicit drugs that are taken with the intention of enhancing athletic performance. The most commonly used substances are anabolic-androgen steroids, androstenedione, human growth hormone, erythropoietin. All of these substances can determine serious physical and psychological side-effects.

There is currently little data regarding BMI, subjective body perception, dieting, physical activity, use of dietary supplementation and of doping in Italian university students. In this part of our study, we analyze this population's characteristics in regards to the above mentioned issues.

The information regarding the study population, and study design, including the development process of the "Sportello Salute Giovani" ("Youth Health Information Desk") questionnaire, the questionnaire contents, the data entry and cleaning, the codification of variables and the sample characteristics, have been previously covered in another paper in this same monograph [13].

In this part of the study, we analyze the data deriving from the questions regarding:

 subscription to a fitness center/gym (question 19);

For each question absolute and relative frequencies were calculated. For questions that investigated quantitative variables, results were reported as mean ± standard deviation (SD). The BMI was obtained and coded in classes as explained in the paper written by de Waure et al [13]. Furthermore, data was stratified for sex, age class and socio-economic status according to classes described in [13]. Differences related to sex, age class and socio-economic status were evaluated through the chi squared test. A p value < 0.05 was considered statistically significant.

Tables and graphs were used to summarize the results.

The complete tabular presentation of the data regarding this section of the study can be found in the Appendix which is available online as Supplementary Material at www.iss.it/anna. 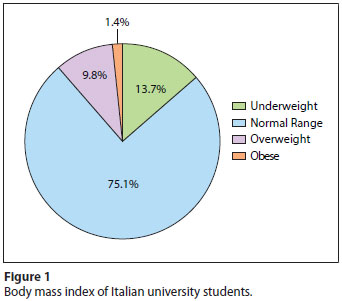 When asked if on a diet, 11.0% of the student population answered that they were, while another 28.0% expressed the fact that they were not currently on a diet but felt that they should have been. 63.5% of the students were satisfied by their current body weight, considering themselves to either have a good body weight (47.2%) or even to be physically fit (16.3%). 8.4% believed to be a little too thin while 24.8% believed to be a little too overweight. 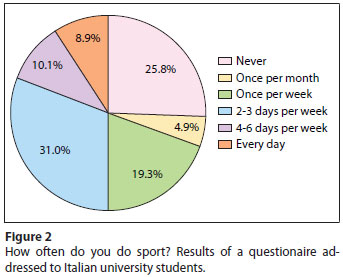 Less than 1% (0.9%) of the students admitted consuming doping substances.

Of the group of students that did use nutritional supplements, we observed a different type of supplementation between males and females. Of the females, 51.1% routinely used only vitamines as compared to 22.7% of males; furthermore, only 5.3% of females used proteines/aminoacids in comparison to 21.2% among males (p < 0.05).

The analysis of the data stratified by age groups did not show any other significant results.

A higher percentage of students of a high socio-economic level considered themselves to be physically fit (p < 0.05).

The data deriving from this questionnaire showed that while the majority of university students has a BMI in the normal range, 11.2% of the study population was overweight/obese. This percentage is very different from that described by the OECD for the adult population (> 15 years old) in Europe in which 53% was overweight/obese [14], and from the overall prevalence of overweight/obesity in the Italian adult population (> 18 years old) which is 42-46% [15, 16]. It is also quite different from the results released by a multicenter study performed in 22 universities belonging to low, middle income and emerging economy countries in which the percentage of university students who were classified as overweight/obese (according to their self-reported anthropometric measures) was 19.3% of females and 24.7% of males [17]. Taking into account the survey run by the National Institute for Statistics in 2013 on approximately 46 000 people, the Osservasalute Report 2014 showed that the prevalence of overweight and obesity was 17.6% and 29.1% respectively in the groups aged 18-24 and 25-34 [16]. According to the PASSI project which assessed approximately 151 000 individuals from all of the Italian Regions, the prevalence of overweight/obesity in the population aged 18-34 years old was 25% [15].

Notwithstanding the different figures, also our study showed that males present a higher risk of being overweight or obese, with a percentage of 18.5% of the male population compared to 7.4% of the female population. In contrast with the evidence deriving from international literature, which suggests that obesity is more common in disadvantaged socio-economic levels [18], in our study the highest percentage of obese subjects was found in the high socio-economic level, even though the differences were slight.

The survey also showed that more than 1 of 4 students reported never doing any type of physical activity, a datum which agrees with international literature. In fact, a cross-sectional survey carried out on 19 298 university students from 23 countries demonstrated a prevalence of inactivity in leisure time varying from 23% to 44% according to the country [19]. The same Osservasalute Report 2014 reported a prevalence of inactivity of 27.2%, 27.8% and 34.8% respectively among populations aged 18-19, 20-24 and 25-34 years old [16]. Finally, the overall prevalence of sedentary people reported by the PASSI project was 26% among 18-34 years old [15]. The crude worldwide prevalence of physical inactivity was estimated through the pooling of data coming from three multicenter studies (with a total of 300 000 individuals from 76 countries aged 15 years or older) to be around 21% [20]. Our study showed that the prevalence of inactivity was higher in females than in males, in accordance with the results of the Osservasalute Report 2014 [16].

These data are worrisome since the World Health Organization recommends that adults from 18 to 64 years of age should do at least 150 minutes of moderate-intensity aerobic physical activity throughout the week in bouts of at least 10 minutes or at least 75 minutes of vigorous-intensity aerobic physical activity throughout the week [21]. Furthermore, it is well known that physical activity is associated to better anthropometric measures [22] and that physical inactivity is commonly associated with other risk factors such as smoking and unhealthy diet [23]. As a consequence, in May 2013 the World Health Assembly endorsed the WHO Global Action Plan for the Prevention and Control of NCDs 2013-2020 which is a road map of policy options aimed at contributing to the progress on the nine global non communicable diseases targets to be attained in 2025. Among the recommendations for contrasting physical inactivity are the adoption and implementation of national guidelines and the encouragement of physical activity in all ages. These two policy recommendations should be carefully considered in order to reduce sedentarity [24].

Noticeably, approximately 85% of students reported not using any form of nutritional supplementation. The information collected refers to the period in which the questionnaire was self-administered and is coherent with the data deriving from the Third Italian National Food Consumption Survey, which showed that 82% of the population did not use any form of nutritional supplementation [25].

In conclusion, the most important concern arising from the questionnaire seems to be represented by physical inactivity. In this respect, initiatives aimed at promoting physical activity in university students should be encouraged and planned.

14. Organization for Economic Cooperation and Development. Health at a glance: Europe 2014. OECD Publishing; 2014.

24. World Health Organization. Global action plan for the prevention and control of NCDs 2013-2020. Geneva: WHO. Available from: www.who.int/global-coordination-mechanism/publications/global-action-plan-ncds-eng.pdf.

Submitted on invitation.
Accepted on 16 April 2015.
Conflict of interest statement: None.