INTRODUCTION: Visual performance of eyes with congenital pathologies is conditioned by an early diagnosis. Families having problems in accessing health services risk to delay or miss both an early diagnosis and an early treatment and amblyopia (lazy eye) prevention.
METHODS: In our hospital, all full-term, healthy newborns are thoroughly examined by an ophthalmologist in the maternal ward, 1 to 3 days after birth.
RESULTS: Among the first 5000 newborns examined, a high incidence of congenital pathologies compared to international literature was reported, with differences between Caucasians and non-Caucasians.
CONCLUSION: Performing an early in-hospital thorough eye examination in all newborns as a screening would be an effective way to miss none and to start an early and effective pathway of disease treatment.

The rapid postnatal increase of visual acuity [1, 2] requires an early identification of congenital eye pathologies. The most diffuse and sight-threatening pathologies (cataract and glaucoma) are often diagnosed during a pediatric examination later in the infant's life, or by an altered red reflex in photographs, thus delaying interventions for disease treatment and amblyopia prevention. Chan et al. [3] reported that visual outcomes are better in children undergoing surgery before 6 weeks of age in unilateral cataracts and before 10 weeks of age in bilateral ones. Mandal et al. [4] reported that the majority of congenital glaucomas (about 60%) are diagnosed by the age of 6 months, and 80% are diagnosed within the first year of life.

In 2008, the American Academy of Pediatrics (AAP) [5] provided the pediatricians with guidelines on the Red Reflex Test (RRT): this must be performed, possibly at birth, by a trained pediatrician in a darkened room, projecting the light of a direct ophthalmoscope into both eyes from approximately 18 inches away, and checking that a red reflex comes back from both eyes.

In 2012, a non-institutional survey [6] reported that in Italy in only 64% of the maternal wards, and in none with more than 2500 births per year, the RRT was performed by a pediatrician in all newborns at birth.

In this paper, we demonstrate how an ophthalmologist can easily integrate the RRT with an examination of both the anterior segment and the fundus of the newborns' eyes in a handful of seconds, thus providing a prompt diagnosis and allowing the ill babies to start the therapeutic pathway as soon as possible.

Since June 2011, at the maternity ward of the "Spirito Santo" Hospital in Pescara, Italy, the eye examination is part of an institutional and parent-approved series of routine clinical ones in all full-term, healthy newborns, 1 to 3 days after birth.

In February 2014, 5000 consecutive newborns (Caucasian: 2427 males and 2334 females; non-Caucasian: 116 males and 123 females; see Table 1 for distribution by sex and ethnicity) had received the test by an ophthalmologist. Pupils are dilated with 0.5% tropicamide drops (Visumidriatic 0.5%, Visupharma, Italy), gently pressing the inner lid canthus in order to reduce systemic absorption. Then, in a darkened room, the ophthalmologist, with a direct ophthalmoscope (Welch-Allyn, USA), checks the red reflex of both eyes from an arm's distance (according to the AAP guidelines), and thereafter adds a closer exam of the anterior segment (focusing the iris plane) and posterior pole (focusing the retina), at a few centimeters' distance. Moreover, he disposes of a ruler, to measure the corneal diameters in the suspect of buphthalmos in congenital glaucoma. 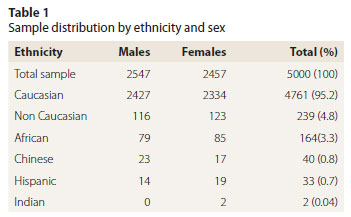 Tests are routinely performed with the parents' informed consent and data treated in compliance with the Declaration of Helsinki. The present note is a report of routine clinical practice. All pathologic infants are sent to the Bambino Gesù Children Hospital in Rome, for therapy and for a thorough study of both the newborns' clinical condition and the parents' health status.

In addition, one case of Primary Hyperplastic Vitreous Persistence (PHVP), one case of angle dysgenesis and one case of inferior coloboma of the iris, retina and choroid were reported.

Embryonic vitreous remnants were frequent: pupillary strands (n = 679) and/or (multi)focal ectropion uveae (n = 128, mainly in the superior pupillary margin). Cases with ectropion uveae were given particular attention to other signs of local (glaucoma) and/or systemic (neurofibromatosis or other neural crest cell disorders) disease, always absent, and reported to the newborn's pediatrician.

Retinal haemorrhages were found in 79 newborns, all of which born by vaginal delivery.

In our series, the incidence of pathologies ranks high in worldwide reports, possibly because all newborns were screened, thus avoiding missing cases.

With limitations owing to the small sample, there was a significant difference between Caucasian and non-Caucasian newborns: cataract's incidence was 1.05/1000 in Caucasians and 8.37/1000 in non-Caucasians (p =

We believe that our results raise important problems of health policy: missing the opportunity of a thorough eye exam or - at least - a RRT at birth, particularly in babies who may have a delayed and/or difficult approach to (public) assistance, increases the risk of not having their pathologies identified and treated in due time. This appears to be important particularly for non-Caucasian babies, showing a higher incidence of pathologies.

Aside of genetic factors, it is well known [13, 14] that a series of social ones is related to health (mainly infectious diseases) and mortality: income, education, occupation, marital status and so on. Moreover, in different ethnicities the prevalence of both systemic and ocular diseases (infectious and non-infectious) is heterogeneous, and the immunization status can be suboptimal [15]: this could account for subclinical or latent conditions predisposing to a pathologic development of eye structures.

Finally, from a strictly scientific viewpoint, it is very interesting to notice how a careful and close examination of structures like the iris and pupil (missed by the RRT) can show aspects of late intrauterine development of the eye: such structures are involved in the regression of the tunica vasculosa lentis (a membrane covering the lens and extending across the pupil, regressing before birth) [16]: the high incidence of pupillary strands and (multi)focal ectropion uveae, disappearing in the weeks/months after birth and never related to eye or systemic pathologies, shows how late intrauterine processes can continue even after birth (what has been pathologically shown by the case of PHVP).

In our experience, the RRT can be easily integrated with a thorough eye examination and performed at the maternity ward by an ophthalmologist in a very short time, thus possibly widening the spectrum of clinical conditions being detected. In Italy, the eye examination at birth is not always provided as a routine procedure in hospital settings, but we believe it should be encouraged, since it fulfills both the 1968 Wilson and Jungner's [17] and the 2008 World Health Organization's [18] criteria for screenings.

9. Rabi JS. Measuring and interpreting the incidence of ocular anomalies: lessons from a national study of congenital cataracts in the UK. IOVS 2001;4:1444-8.

18. Andermann A, Blancquaert I, Beauchamp S, Déry V. Revisiting Wilson and Jungner in the genomic age: a review of screening criteria over the past 40 years. Bulletin of the World Health Organization 2008;86(4):317-9.