A worldwide shortage of nurses has led wealthier nations to conduct aggressive campaigns to recruit nurses from poorer countries. While the nurses who leave may find higher wages and better working conditions in their new locations, the home countries they leave behind suffer the loss of highly trained health personnel who are not easily replaced.

"In all regions of the world there are countries recruiting and countries sending nurses," says Dr Naeema Al-Gasseer, senior scientist for nursing and midwifery at WHO. "The issue is not the behaviour of the countries but rather of establishing a code of practice to ensure that countries respect the right of these health professionals to free movement and that their movement does not impair the health of the populations in both recipient and sending countries."

One example of that movement is the United States' recruitment of nurses from the Philippines, whose government has a policy allowing nurses to migrate to other countries. According to Ms Cheryl Peterson, director of the International Nursing Center at the American Nurses Association (ANA), special schools with curricula and testing standards comparable to those in the US have been established Philippines' government to train nurses for work in the US. The problem, says Peterson, is that the US is not only recruiting graduates from these programmes but has also started tapping more highly skilled  and less easily replaced  nurses, such as those who work in emergency rooms.

But the US isn't alone in aggressive recruitment of nurses. A recent WHO survey found that 77% of developed nations are experiencing nursing shortages and are nearly all looking abroad to fill the gap. During a meeting last year of WHO's Global Advisory Group on Nursing and Midwifery, the group's experts discussed data showing that the number of nurses going to the UK had risen by 48% in the past year. Nurses went to the UK primarily from Australia, New Zealand, the Philippines, South Africa, and the West Indies. Meanwhile, Spanish nurses are leaving Spain in large numbers to accept nursing jobs elsewhere in Europe. The advisory group called upon WHO to establish international guidelines for the recruitment of nurses and to set up a global enquiry on the nursing shortages.

Job dissatisfaction, hazardous working conditions, and low job status are behind the nursing shortage in Western countries, according to a study published in the May/June 2001 issue of Nurses Reports by Dr Linda Aiken, a professor of nursing at the University of Pennsylvania School of Nursing in the USA. The study surveyed 43 000 nurses from more than 700 hospitals in Canada, Germany, the UK (England and Scotland), and the US. Among nurses under the age of 30 who planned to leave nursing within a year, young English and Scottish nurses were the most discontented, with 53% and 46% respectively planning on leaving. Salaries were also considered inadequate by a large proportion of the nurses surveyed, with only 20% of English nurses and only 26% of Scottish nurses reporting that their wages were acceptable. In the US, according to ANA estimates, approximately half-a-million men and women with active registered nurse licences have left the profession.

This is not just a problem of rich countries. According to WHO, ten years ago in Poland over 10 000 new nurses were being graduated annually from educational courses. That figure has fallen to 3000. And in Chile only 8000 of the country's 18 000 nurses are actively working, according to the Chilean Nursing Association.

How to stem the tide? Improving working conditions for nurses at home and abroad is one way, say the experts. "The global nursing shortage, acute in many regions, can only be solved through serious and strategic partnerships between national nursing associations, government representatives and human resource planners," said Ms Judith Oulton, chief executive officer of the International Council of Nurses (ICN), in a recent press release. The ICN, based in Geneva, Switzerland, is the largest international nursing organization. 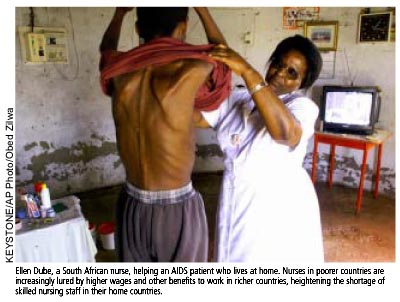 WHO's Al-Gasseer notes that many countries are trying to improve nurses' working environments and career prospects. She cites the Caribbean countries, where nurse experts are working with decision- makers to develop strategies for managing nurse migration. In the UK, she says, the Royal College of Nurses has been very active in ensuring that nurses are treated well regardless of their origin. The UK government has published guidelines on international recruitment of nurses, as well as a code of practice for the UK's National Health Service officials involved in international recruitment of nurses.