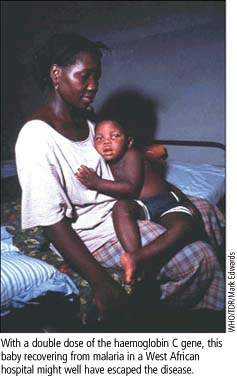 A genetic variation of haemoglobin, the oxygen-carrying protein found in red blood cells, can almost completely abolish the risk of falciparum malaria, the most lethal form of the disease, according to a study in West Africa reported by African and Italian researchers in the 15 November issue of Nature. Having two copies of the gene for the variant, called haemoglobin C, provides "almost complete protection" against the disease, according to malaria researcher and study team leader Dr Mario Coluzzi of the University of Rome La Sapienza.

Moreover, haemoglobin C comes with few unhealthy strings attached. Mild anaemia and, in some adults, gallstones are the only adverse effects. "Compared to all other red blood cell mutations that protect against malaria, haemoglobin C is not associated with serious health problems," says Dr David Modiano, lead author of the study.

Earlier work by other research teams, including an epidemiological study in Mali and laboratory experiments on parasite proliferation, had suggested a link between haemoglobin C and malaria resistance, but the results were inconclusive. The Rome team confirmed the protective effect of haemoglobin C by studying the blood of 4348 children of the Mossi ethnic group in Ouagadougou, Burkina Faso. The majority of the participants were healthy, but 835 of them had malaria caused by the parasite Plasmodium falciparum. The scientists determined which forms of the haemoglobin gene each child had inherited.

Modiano and his colleagues are currently conducting a study of more than 5000 people, children and adults, in Burkina Faso to find out whether haemoglobin C merely keeps the disease in check or if it totally blocks infection. How the haemoglobin could accomplish either task remains a mystery. The abnormal protein might produce slight changes in the way antigens are exposed on the surface of red blood cells, says Modiano. Determining how haemoglobin C fends off malaria might guide the development of vaccines and better treatments that safely mimic the mechanism of action involved.