WHO attacks tobacco sponsorship of sports 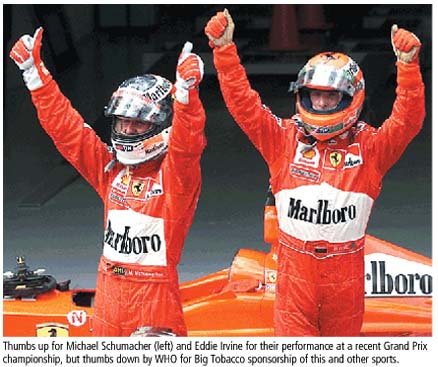 In late November, WHO joined forces with the international governing bodies of motor racing, football, and the Olympic Games, as well as with well-known athletes, in a drive to sweep Big Tobacco out of sporting arenas worldwide. The launch of the "Tobacco Free Sports" campaign, as this drive is called, coincided with the gathering in Geneva of government representatives of WHO's 191 member states for the third round of negotiations on the Framework Convention on Tobacco Control (FCTC), an international treaty that seeks, among other things, strong controls over global advertising and sponsoring activities by the tobacco industry.

"Tobacco is a communicated disease. It is communicated through advertising and sponsorship. The most pernicious and pervasive form of that marketing is found in sports stadiums and arenas worldwide," said WHO Director-General Dr Gro Harlem Brundtland at the launch.

The main goal of the campaign, Dr Derek Yach, WHO executive director for noncommunicable diseases and mental health, told the Bulletin, is "to keep tobacco products out of sporting events and to encourage more people, especially young ones, to engage in sports. We want to get rid of a bad thing and promote a good one because we see that the two just don't mix. It's an unhealthy association."

Mr Johann Koss, Norwegian four-time Gold Medallist in speedskating and chairman of Olympic Aid, an athlete-led humanitarian nongovernmental organization, couldn't agree more. "Tobacco and sport do not belong together. As athletes and role models, we will try to eliminate all forms of tobacco in all levels of sport," he commented to the Bulletin.

What's more, adds Yach, linking the sport's excitement to smoking makes sporting events the number one route for tobacco manufacturers to target the world's youth. Experts estimate that tobacco companies pump at a minimum tens of millions of dollars each year into sponsoring major sports events. In the United States alone, according to the US Federal Trade Commission, the major domestic cigarette companies reported spending more than US$ 110 million on sporting events in 1999. And their strategy seems to pay off. When British American Tobacco (BAT) took over sponsorship of the IndiaNew Zealand cricket series held in India in 1996, a survey conducted a few months later in the Indian state of Goa (and published in the 17 August 1996 British Medical Journal) showed that the likelihood of children experimenting with tobacco almost doubled.

It seems that WHO's ideas are falling on fertile ground. The FIA plans to introduce a worldwide ban on tobacco advertising and sponsoring in all FIA-sponsored events from the end of the 2006 season, following a resolution of FIA's World Motor Sport Council from October 2000. This ban includes the FIA's cash cow, Formula One, which enjoys at least US$ 350 million in tobacco sponsorship, according to an FIA estimate: this is widely believed to be more than is spent on tobacco sponsorship of any other single sport. 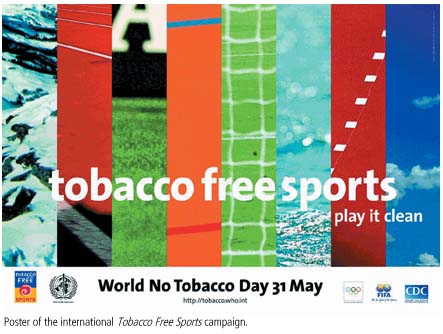 The FIFA and the IOC are one step further ahead. Since the late 1980s, the Olympics and the soccer World Cup have been tobacco-free, and the kick-off of the upcoming World Cup in Japan and Korea on 31 May 2002 will coincide with WHO's World No Tobacco Day. A perfect opportunity to spread the message, Yach notes. "The World Cup will be the most watched sporting event ever; it has an enormous power to influence people," he says.

WHO's concerted effort to make sports smoke-free comes on the heels of a similar proposal from tobacco manufacturers themselves. On 10 September, BAT, Philip Morris and Japan Tobacco announced a new code of conduct on international marketing standards to prevent sales activities specifically tailored to appeal to young people. The voluntary measures, due to come into force in early 2003, would eliminate sponsorship of sporting events, advertising on the Internet, TV and radio, and celebrity endorsements.

So why does WHO need its Tobacco Free Sports campaign? "Tobacco companies can't be trusted," says WHO's Yach. "We urge governments not to accept any self-regulation. They haven't worked in the past and they won't work in the future," he says. For Yach, the announcement of voluntary marketing restrictions is "just another attempt by the industry to persuade governments that there's no need for a strong framework convention".

Currently under negotiation, the framework convention would be the first legally enforceable international treaty on tobacco control attempting to curb deaths from smoking-related illnesses, which, according to WHO estimates, kill about four million people each year [see Box]. With the third round of negotiations completed in late November, Yach is cautiously optimistic: "The basis for a really strong convention is there," he says. Talks will resume next March. Yach thinks that negotiations are "still on target" for the convention to be completed in time for adoption by the World Health Assembly in May 2003.