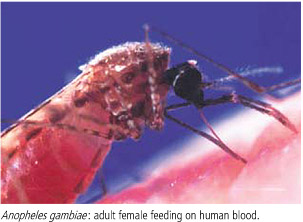 The genetic code of the complete genomes of Plasmodium falciparum, the most lethal of the several malaria parasites, and its major African carrier, the mosquito Anopheles gambiae, were published in Nature and Science this October, bringing these tiny organisms into the same exalted domain as the human genome itself.

Already it turns out that 550 of P. falciparum's 5300 genes are closely related to plant genes - opening the way to research on new drugs based on insecticides. The genes code for - or create - a recently discovered organelle in the body of the parasite called an apicoplast. The apicoplast in turn is very similar to the chloroplast in plant cells, the body that allows plants to photosynthesize, or grow in sunlight.

This doesn't mean that malaria parasites, which are animals, can grow in sunlight. It just means that during their evolution one of them must have absorbed the chloroplast, probably from an alga, found it useful for other purposes, and grew faster and outcompeted their colleagues, creating the P. falciparum we know today. The modern organism uses the apicoplast to make fatty acids, similar to cholesterol in humans, that are essential to its survival.

From the early genome data three years ago, a German group identified a particular mechanism in the apicoplast that looked ripe for attack (Science 1999; 285:1573-6), and recommended trying an existing drug called fosmidomycin, which had been developed for urinary infections; the group showed it cured mice of malaria, and is now in late clinical trial.

This was one of the first fruits of genome mapping, and represents just one kind of knowledge it can give us: comparative genomics, which entails comparing the letters and organization of the genome of one species with those of another. It may prove useful in accelerating research towards new treatments.

Similar stories are already emerging from Anopheles gambiae, the key mosquito vector of malaria. Its gene sequences are being compared with those of the famous laboratory fruitfly, Drosophila melanogaster, which itself has been exhaustively researched for several decades. Now it seems we can identify, by comparison and contrast with Drosophila, the genes in the mosquito which are responsible for the malaria parasite's survival in the mosquito gut, as well as genes for moulting, reproduction, and successful blood feeding.

All these could form new points of attack on the mosquito.

Knowledge of these genomes and the human genome - the parasite, the vector, and its victim - gives us "the opportunity to take a holistic approach in understanding how the parasite interacts with the human host", Alan Cowman, a molecular parasitologist at the Walter and Eliza Hall Institute of Medical Research in Melbourne, Australia, told Science.

Nevertheless the function of two-thirds of the parasite's genes are still mysterious, and perhaps peculiar to the parasite itself. No amount of comparison may determine the function of the proteins they create, and lengthy and difficult research may be required to follow exactly what they do.

It is rather as if, like Galileo, we had turned a telescope for the first time on the Moon, and seen the wonder and detail of its craters and mountains, casting shadows in the sunlight. Suddenly Galileo could compare the Moon with the Earth, yet it was 300 years before anyone landed on Earth's partner in space. So with the genomes of malaria and its vector; we can wonder immediately at the detail of our vision, but it may take a long time and much funding before any of this knowledge turns into a tangible product in the village or the local hospital.

Meanwhile there is competition for limited funding between those who focus on amplifying control with existing tools, such as insecticide-impregnated bednets and education, and those who point to increasing resistance to cheap drugs and insecticides and advocate research for new weapons against the disease and its mosquito vector. For example, on the one hand we have the Roll Back Malaria initiative (RBM), founded in 1998 by WHO, the UN Development Programme (UNDP), the UN Children's Fund (UNICEF) and the World Bank with the goal of halving the world's malaria burden by 2010, which hardly gives time to wait for research. On the other there are bodies like the UNDP, World Bank and WHO Special Programme for Research on Tropical Diseases (TDR) and public- private partnerships such as the Medicines for Malaria Venture (MMV) and the Malaria Vaccine Initiative (MVI) whose task is to find new tools. 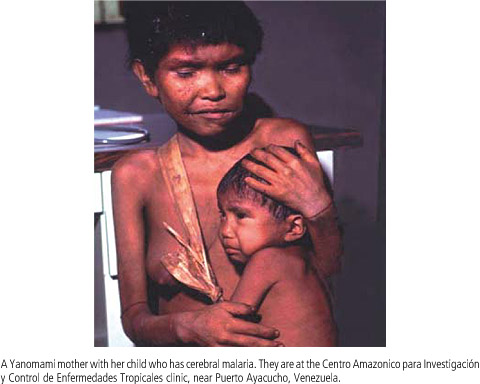 With over a million children and pregnant women dying from malaria in Africa alone each year (see Box), clearly both approaches are necessary. But while the WHO Commission on Macroeconomics and WHO/TDR/Stammers Health estimated that US$ 2.7 billion a year was needed just to control the disease, only about US$ 200 million a year is being spent on it. Roll Back Malaria, which helps countries develop their own programmes and funding sources, has recently been advised by an external commission to focus its efforts on just a handful of African countries. In research MMV has several products in line but just US$ 15 million a year to spend on them, MVI also, with several candidates, has some US$ 50 million, and TDR around US$ 25 million for malaria. Meanwhile pharmaceutical companies estimate that it costs US$ 500 million to discover, develop and market a new product. In total, investment in control and research is about a tenth of the real need.

The malaria and mosquito genomes bring welcome new hope, but having only a tenth of the resources needed weighs heavily. This seems to be the extent of the world's concern for tropical diseases: it is the same ratio by which the Global Fund to Fight AIDS, Tuberculosis and Malaria falls short of the estimated global needs for HIV/AIDS treatment and control (Bulletin of the World Health Organization 2002;80:338).