Nurse and mother faces her own TB and HIV

The global statistics of HIV/AIDS and TB are so high that it is sometimes hard to remember that each case represents a human being with his or her unique experience. Thulisiwe Luhabe, who is a nurse in South Africa and has both AIDS and TB, described what this entails for her, her family and her work.

"Knowing that I had HIV motivated me to change my lifestyle. Now I live for my children. Whatever I do, I put them first and I try to motivate them to change their lifestyles." Luhabe leans back in her chair, and gestures around her lounge. "I bought this flat after I knew that I was HIV positive. I have made my will. I sold my car to get an education policy so my daughters can study after school."

Luhabe, a nursing sister at Port Shepstone Hospital in South Africa's KwaZulu-Natal province, first suspected she had HIV in early 1999 after a series of illnesses. So, without going for any counselling, she asked a colleague to take her blood and sent it off anonymously to the hospital laboratory to be tested for HIV.

"The test came back to me and it was positive. So there I was sitting with it, and not knowing much about the disease and not having had any counselling."

For three months, Luhabe told no one of her HIV status. But by June of that year  after working in the highly infectious environment of the hospital's outpatients department  she developed the unmistakable symptoms of TB. "I had night sweats and persistent coughing," says Luhabe. "I would arrive at work on a Monday, feeling tired. My face looked puffy, my limbs were swollen and I looked anaemic.

"Eventually, I went to the sister in charge and told her that I was HIV positive. She called the matron and I told her too. Matron was so taken aback she immediately gave me sick leave. I was the first nurse to come out and say I have HIV, and I am still the only one."

But after sitting at home for a week, Luhabe went back to the hospital and decided to take a sputum test and have chest X-rays. "The tests confirmed that I had TB. I spoke to one of the doctors who was working with TB patients and she explained the treatment to me. I started on it immediately. I had to take eight tablets a day, first thing in the morning  INH [Isoniazid], Ethambutal and Pufaniprain.

"Luckily, they did not make me feel sick. I took these for two months. Then I went on to one capsule a day of combined INH and Pufaniprain. I took these for four months. The TB made me lose appetite. It was also a problem for my children, as I had to say they must be careful of coming near me because I did not want to infect them. But the treatment was very successful. By February 2000, I was cured. I now have my appetite back and I am all right. I was so lucky to have a supportive management, who explained that I could be cured of the TB."

Shortly after being cured of TB, Luhabe started antiretroviral (ARV) treatment, which is being paid for by her medical aid, a private health insurance policy she took out after discovering she was HIV positive. Now her viral load has been reduced to an undetectable level (less than 400 copies/ml of blood).

Luhabe is one of the lucky ones, however. Less than 20% of all South Africans are on medical aid. Those with medical aid who are HIV positive generally pay higher premiums to get access to antiretroviral drugs. No ARV drugs are being offered in public health facilities. However, the South African government has set up two `pilot sites' in each of its nine provinces, offering the ARV drug, nevirapine, to pregnant HIV-positive mothers in a bid to prevent mother-to-child HIV transmission.

Today, one of Luhabe's ambitions is to be involved with the hospital's voluntary HIV counselling and testing programme.

"All the TB patients should take the test. I want to show them I am here, I am HIV positive. I had TB but I was cured. Some of the people with HIV develop TB and other AIDS-related illnesses but they don't come to the clinic. They stay at home and hide from us because they are ashamed and they lack information."

For now, Luhabe has to stay on night shift as the hospital can't spare her. But she is not discouraged, and talks to her patients about the importance of taking the HIV test. 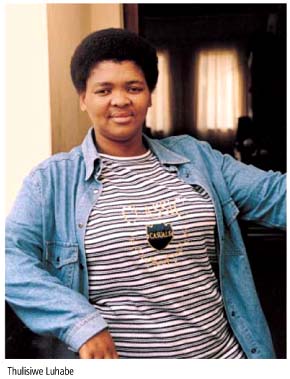