A pilot project in Nepali schools, giving deworming tablets, a hot meal for the children and food gifts for girls to take back to their parents, has created such a virtuous circle of success  getting girls to stay in school, eliminating helminths and feeding children and families  that the World Food Programme say they would like to expand the programme worldwide, if only donors would support them.

"We teachers cook the midday meal for the children" said Sita Ram Thakur, Assistant Headmaster of Saraswoti Primary School at the little town of Ghadi. "So they regularly come to school and teachers teach them, so they learn at least something every day  and regularly taking deworming tablets, because they have seen how the tablets make the worms come out in their faeces and from their mouths".

"We've had remarkable progress in health, education and awareness among the students  and their parents" said Haribol Khanal, Programme Director of the Primary School Nutritious Food Project (PSNFP), launched in 1998 by the Ministry of Education (MOE) with the financial and technical assistance of the United Nations World Food Programme (WFP) and WHO.

The helminths commonly found in Nepal are roundworm (Ascaris lumbricoides), whipworm (Trichuris trichiura) and hookworm (Ancylostoma duodenale and Necator americanus). In June 1996 a WHO survey in Parsa, Surkhet and Dailekh districts in Central Development Region and Mid-Western Development Region indicated that 65% of children were infected with hookworm, followed by 21% with roundworm and 19% with whipworm.

But a mid-term review of the PSNFP schools in November 2000 indicated that the proportion of children with any worm infection at all had fallen from 74% to 48%, while intensive worm infections, which used to be found in 9% the schoolchildren, could now be found in just 2%. On top of that, anaemia had vanished, while the enrolment rate in PSNFP schools had grown by 39%, with girls' enrolment growing by 43%. The PSNFP now covers 21 of the 75 districts of Nepal, with US funding chanelled through the WFP. 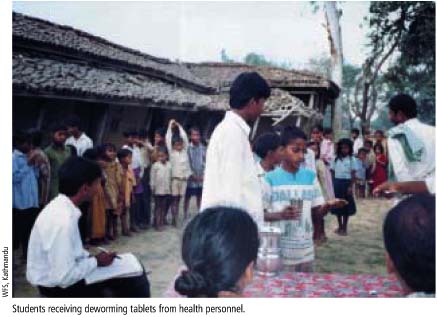 The programme was a clear success. So it needed to be expanded, not only in Nepal but worldwide. Experience-sharing meetings between the Nepalese project implementation team and representatives from several African countries were organized in April 2001 in Uganda and in December 2001 in Ivory Coast, resulting in an African extension of the programme.

Arlene Mitchell, Chief of the School Feeding Support programme at the World Food Programme (WFP) told the Bulletin "We are now preparing a grant proposal to allow us to continue this effort, and to ensure that it is implemented worldwide, wherever intestinal parasites are a problem".

"In April, we are hosting the second annual meeting of the 'Partners in Parasite Control', a group of UN agencies, NGOs and other interested parties that WHO put together to cooperate in activities like this."

"We started the African effort with US$ 250 000 from a Canadian/CIDA grant. WFP added some of its own money for the workshops, and the World Bank funded US$ 21 000 to help with the last workshop."

"Although the treatments are not expensive per child, they are when we are talking of treating millions of children. WFP fed 15 million schoolchildren last year."

Moreover, said Mitchell, "the treatments do not cure the parasite problem, they rid the child of the worms for a while, until the child is reinfected. Even with decent health education, children in parasite-endemic areas get reinfected."

"So we need funding to:

 continue "pilot" programmes (the first treatments, in WFP-assisted schools) for those countries which have not yet been funded;

 fund repeat treatments in countries which have begun but which have no resources to continue;

 expand treatments to all schools in countries which have only been able to treat WFP-assisted schoolchildren;

 train personnel and pay for treatments in countries which have not begun deworming programmes but where there is a parasite problem; and

 provide technical support and health education materials to all the countries to ensure that the treatment is being done effectively and with the appropriate accompanying lessons.

"We have not had to stop our work yet. But we are running out of money for this work, which is not a core WFP activity. We normally only provide food and enough money to manage the food's storage and distribution, monitoring, etc., so this cannot come from WFP's core budget."

According to Lorenzo Savioli, coordinator for parasitic diseases at WHO, "In Nepal we raised support from UNICEF, Japan and other sources  we shouldn't expect WFP to do this alone. In every country we will need to put together a collection of partners to help support the project".

In Nepal "We've seen remarkable trends," said Prem Narayan Chaudhary, Chief of the PSNFP in Doti. He says more and more girls are seen in the classes. "They used to escape in the afternoon or earlier, but now they stay the whole day."

Deworming is having a positive impact because the children feel immediate relief from pain, the worms come out in bundles, and the children gradually become healthier. The students are so impressed they also ask for tablets for their brothers and sisters as home. "Even the teachers take extra medicine for their family members," added Chaudhary.

But on the world scale, the project is on a knife-edge. According to Arlene Mitchell "We are squeezing the last dimes out of the Canadian grant, and are trying to find new sources of funds (Canadian or other) to support the continued work. We've had a grants proposal writer write a proposal that we will now "market" in hopes that we can find outside funding to support the deworming programmes." n