Dr Annalena Tonelli, the Italian humanitarian worker famous for her pioneering work in the fight against tuberculosis (TB), was shot dead on 5 October in the grounds of her TB hospital in Borama, north-western Somalia. The circumstances of her death remain unknown. Tonelli had been treating TB patients from nomadic and refugee families in Kenya and Somalia for 33 years and had helped raise awareness of HIV/AIDS.

WHO Director-General, Dr LEE Jong-wook, described her killing as a major loss for TB control. Tonelli had been instrumental in developing the TB treatment strategy, DOT — Directly Observed Treatment — among communities in Kenya and Somalia. In line with the DOT strategy, she had insisted that patients remain in her care until they had completed their course of medication — an essential element in the prevention of multidrug-resistant TB.

"Annalena Tonelli personified courage and selfless dedication and was a model for TB workers around the world," said Dr Nils Billo, Acting Executive Secretary of WHO's Stop TB Department. "Her death is a loss for all of us," he said. Tonelli's death as drawn attention to the often dangerous conditions faced by TB and other health workers operating in conflict situations. Such conditions have contributed to a growing recruitment crisis within the TB community (see story below). "Her death reminds us of the perils facing people who risk their lives in the service of the health of others," said LEE. 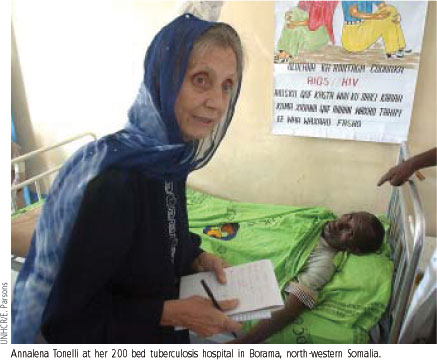