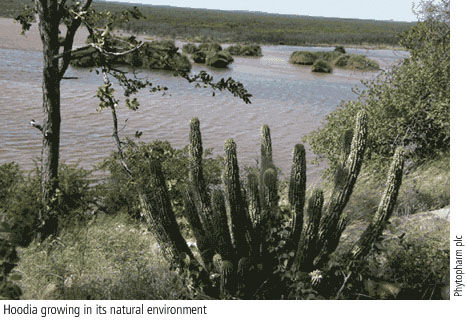 A groundbreaking agreement has been signed granting the San people (formerly called the Bushmen) a share of profits from a potential obesity-reducing drug extracted from the hoodia cactus. The deal is one of the first to give holders of traditional knowledge a share of royalties from drug sales.

For thousands of years the San, one of the oldest peoples in Southern Africa, have eaten slices of the bitter hoodia to keep them going for long periods without food or drink when they are on hunting trips.

In the 1960s the Council for Scientific and Industrial Research (CSIR), based in South Africa, isolated the appetite suppressant molecule in the hoodia and patented it. In 1997 the CSIR licensed the rights to the molecule, named P57, to a UK-based company, Phytopharm. After initial tests on the drug looked promising, Phytopharm sold on the rights for US$ 21 million to the pharmaceutical giant, Pfizer.

Shares in Phytopharm and Pfizer rose sharply amid hopes that the drug would revolutionize the US$ 9.5 billion market in slimming aids. There was an international outcry with the companies accused of biopiracy. The chief executive of Phytopharm, Richard Dixey, told the Financial Times at the time that he believed the San "had disappeared."

The San, very much alive and numbering 100 000 in South Africa, Namibia, Botswana and Angola, then launched a legal battle to get a share of the profits. After years of tough negotiation a benefit-sharing agreement was finally signed on 24 March 2003. Under the terms of the agreement the CSIR will pay the San 8% of all milestone payments it receives from its licensee, Phytopharm plc, as well as 6% of all royalties that the CSIR receives once the drug is commercially available.

Even though this represents only a tiny fraction of the net profits, Roger Chennells, lawyer for the South African San Council, told the Bulletin: "The San are very happy with the agreement. They expect to get 12 million rand (US$ 1.6 million) over the next 34 years; then if things go well 1012 million rand per year."

The money is to be deposited into a San Hoodia Benefit Sharing Trust and will be spent on education, skills development and creating jobs for the San, one of the most impoverished and marginalized groups of people in Southern Africa.

Petrus Vaalbooi, chairperson of the South African San Council, says: "We are thankful that the traditional knowledge of our forefathers is acknowledged by this important agreement, and that we are making it known to the world. As San leaders we are determined to protect all aspects of our heritage."

It is possible that P57, like any drug in development, will come unstuck in clinical trials. However, as it has effectively been tested in humans for centuries, it is likely to have few of the adverse side-effects that are common with other slimming products. A UK Phase IIa clinical study in 18 obese patients showed that P57 reduced calorie intake by an average of 1000 calories compared with placebo (see graph www.phytopharm.com/Platforms/MetabolicSyndrome_P57.shtml). Larger studies are now planned and Pfizer hopes to have the drug on the market by 2008.

The San have detailed knowledge of thousands of other indigenous plants, many of which have potential medical uses. They are planning to work in partnership with the CSIR to develop some of these plants commercially. Mr Chennells said: "We are optimistic that this case will serve as a sound foundation for future collaboration, not only for the San but also for other holders of traditional knowledge."