International efforts are under way to step up production of new long-lasting insecticidal mosquito nets which falls far short of the massive demand, experts say.

The new nets, which were first developed in the 1990s but have only recently become more readily available, provide fresh hope for preventing malaria, the number one killer of children aged under-five in Africa.

Production has increased and more money is there to buy them, but experts say major obstacles to delivering treatment are supply, distribution and red tape.

In an unprecedented meeting last month, humanitarian and health agencies working in malaria control linked up with the private sector to discuss ways of speeding up production and distribution of these improved insecticidal mosquito nets.

Members of the Roll Back Malaria Partnership including WHO and the United Nations Children's Fund (UNICEF) organized the two-day event in Johannesburg, South Africa with the Rockefeller Foundation and USAID NetMark Plus, a US government initiative to fight malaria in Africa.

The new net retains insecticide for the life of the net, which can be four years or more. This is a major improvement on existing insecticidal mosquito nets, which needed to be re-treated every 6–12 months.

High levels of re-treatment, however, have proved very difficult to achieve in Africa, partly due to the cost of insecticide but also because of a lack of proper organization. According to WHO less than 20% of nets there are re-treated.

"Those who expected people in poor rural areas to take the initiative to re-treat their mosquito nets have been proven wrong", said Dr Allan Schapira, coordinator of the strategy and policy team in WHO's Roll Back Malaria Department.

"In East Asia this is organized by the public health services but in most areas in Africa re-treatment has been left to individuals," Schapira said.

Of the one million deaths annually from malaria, 90% are in Africa and are mostly among young children and pregnant women. A systematic review found that using insecticidal nets is a highly effective way to reduce childhood mortality and morbidity from malaria (Cochrane Database Syst Rev 2004; (2): CD000363).

One of the targets set at the Abuja Summit in April 2000, a key meeting of the Roll Back Malaria Partnership of humanitarian agencies and governments, was to have 60% of populations at risk sleeping under insecticidal nets by 2005.

UNICEF estimates that 30–40 million long-lasting insecticidal nets are required annually for the next five years to meet demand. At the moment only 13 million are being produced each year.

UNICEF's Regional Director for Eastern and Southern Africa, Per Engebak said: "Our goal is to save lives. Every 30 seconds, a child dies of malaria, a life that could be saved with an insecticidal net. A quantum leap in production will help us save millions and also enable the private sector to do good business."

Several long-lasting nets are currently under development and two products were approved by WHO last year. Long lasting insecticidal nets are subject to assessment by the WHO Pesticide Evaluation Scheme as part of the WHO recommendation process. This is a rigid scientific review of their efficacy, effectiveness and safety based on a series of laboratory, experimental hut and field studies (www.who.int/whopes). 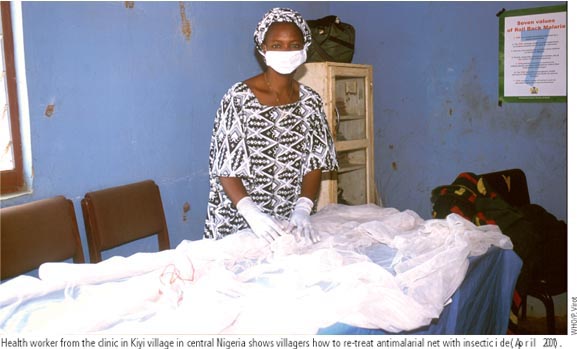 The Olyset, which is manufactured at plants in China by Sumitomo Chemical Company of Japan, is now also being made for the first time in Africa.

A technology transfer agreement means A to Z Textile Mills in the United Republic of Tanzania is now manufacturing the nets with funding from Acumen Fund, a non-profit venture capital fund set up with seed capital from the Rockefeller Foundation, Cisco Systems Foundation and three wealthy individuals.

The other approved net is PermaNet 2.0 made by the Danish company Vestergaard Frandsen in Thailand and Viet Nam.

"We need to get more manufacturers making the nets to increase production capacity and hopefully bring the prices down", says Dr Don de Savigny, research manager at the Swiss Tropical Institute in Basel, Switzerland, who chaired the Johannesburg meeting. "There are lots of idle polyester factories in Africa that could be used to make nets."

Dr de Savigny told the Bulletin that an exciting innovation presented at the meeting was the development of a binder that can be used to lock insecticide onto nets for many years. This would mean that millions of nets already in homes could be given a one-off treatment to last several more years.

The treatment, developed by German pharmaceutical company Bayer, has been submitted to WHO for approval, de Savigny said.

A normal net costs around US$ 1.75 compared to US$ 4.50 for a long-lasting insecticidal net but is not as cost-effective as a long-lasting one. The Global Fund to Fight AIDS, Tuberculosis and Malaria recently approved the purchase of 108 million nets so money is available.

"At this point in time, the major bottleneck is not money but for countries in Africa to organize distribution of long lasting insecticidal nets to achieve high coverage. Governments need to assume responsibility rather than leaving it up to NGOs," WHO's Schapira said.

Dr David Molyneux, director of the Lymphatic Filariasis Support Centre at the Liverpool School of Tropical Medicine, argued in the BMJ in May that the Roll Back Malaria Partnership's scheme for net distribution, in which pregnant women attending antenatal services should receive vouchers to subsidize the purchase of nets, misses the many women who do not attend such services (BMJ 2004;328:1129-32).

Dr Molyneux said that the distribution of nets should be linked to other disease control programmes. For example, a recent programme offered a free insecticidal net to people attending measles vaccine sessions in remote rural districts of Zambia and Ghana.

As a result, the target for net coverage in the areas was achieved in one week. Malaria control programmes could also be combined with programmes for preventing two other parasitical diseases: river blindness and bilharziasis.

In the Abuja Declaration of April 2000, African governments committed themselves to reduce or eliminate the tariffs and taxes imposed on mosquito nets and insecticides.

"Some countries tax mosquito nets at the same rate as an Armani suit. At the Abuja summit all the African heads of state agreed to stop this but few countries have followed this through," De Savigny said adding: "Tanzania was one country that did so and now has one of the highest net coverages in Africa. In comparison, Nigeria still applies a 70% tax on nets".