Glaucoma is second leading cause of blindness globally

The urgent need for more public health action to tackle glaucoma is underscored by the work of Swiss ophthalmologist André Mermoud, known as the 'glaucoma pope'. His charity Vision for All provides free eye health care for poor patients in India, where it has built and operates an eye hospital, and in central Africa.

Glaucoma is becoming an increasingly important cause of blindness, as the world's population ages.

New statistics gathered by WHO in 2002, and published in this edition of the Bulletin (Resnikoff et al., p. 844–851), show that glaucoma is now the second leading cause of blindness globally, after cataracts.

Glaucoma, however, presents perhaps an even greater public health challenge than cataracts: because the blindness it causes is irreversible.

WHO officials are looking into ways to address the problems caused by glaucoma which was until now estimated to be the third leading cause of blindness.

"It is a major problem, we've been concerned about this for some time and we are now working hard to address this important cause of blindness," said Dr Robert Beaglehole, WHO's Director of Chronic Diseases and Health Promotion in Geneva.

The urgent need for action is underscored by the philanthropic work of Swiss charity Vision For All. André Mermoud, the group's director, is the Head of the Glaucoma Unit at the Jules Gonin Eye Hospital at the University of Lausanne in Switzerland has become known as the 'glaucoma pope' for his work on the disease.

Mermoud told the Bulletin that governments and public health officials face "a really big task" to improve treatment for glaucoma. 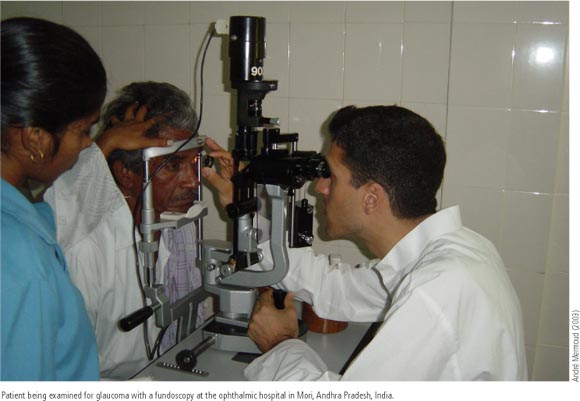 "Something has to be done," Mermoud added. "Especially in Africa, it will be essential to train hundreds of eye doctors."

Glaucoma is the general term for a group of similar diseases. In primary open angle glaucoma, the channels that drain fluid within the eye become blocked, causing the pressure within the eye to rise.

It causes gradual loss of vision. There are few symptoms so that people may not notice for a long time that they are losing their sight.

In angle closure glaucoma, there is a similar build up of fluid within the eye, but the onset is much more sudden. Symptoms include headaches, blurred vision and pain in the eye.

People of Asian descent are much more likely to suffer from angle closure glaucoma, while those of African or European origin are more likely to develop primary open angle glaucoma.

In Southern India, studies have shown a prevalence of glaucoma of 2.6% and 90% of these cases have never been diagnosed before, compared to about 50% previously undiagnosed when similar studies are done in Europe.

In African populations, the prevalence is 1–2%, but can rise to about 10% in the Caribbean.

There are several other types of glaucoma, which are less common.

The paper by Resnikoff et al. reports that about 37 million people worldwide in 2002 were blind. More than 82% of all blind people are 50 years and older.

There are several reasons why glaucoma has now become the second leading cause of blindness, experts say. One is age. As a population grows older, the prevalence of glaucoma rises.

Another reason is the reduced importance of trachoma as a cause of blindness.

This is due to several factors including the Global Elimination of Trachoma Project, which WHO launched with partner organizations, as well as better access to health care and information, and to eye care system development, and improved data.

In their paper Resnikoff et al. found that the world population aged 50 years and over had increased by 30% since 1990.

Ophthalmic experts say angle closure glaucoma is reaching "epidemic proportions" in China and other parts of Asia, but there are few reliable data from these countries.

Mermoud identified the lack of trained ophthalmologists as a major factor limiting the diagnosis and care of people with glaucoma in developing countries.

"Even when people do reach a doctor, they don't have the money to pay for medicines and eye drops which they may need to take for the rest of their lives. And although surgery to unblock the channels in the eye would be the ideal treatment, it does not work so well in African and Asian patients as in people of European descent for reasons of rapid scarring of the tissues," Mermoud said.

Mermoud is carrying out research to develop surgical procedures that will be more effective in people with glaucoma from Africa and Asia.

His charity has also established a hospital in the village of Mori, in Andhra Pradesh, in India, which is now one of the biggest eye hospitals in the country. It has two operating theatres and 50 beds.

Although the hospital was built only three years ago, it is now well on the way to being self funding.

The poorest patients are treated free, those on middle incomes are asked for an affordable contribution and the wealthiest  who are attracted by state-of-the-art surgical techniques  pay the most, thus financing the treatment of those who pay less or nothing at all.

The hospital also has a bus equipped as a mobile diagnostic unit.

Cataract and glaucoma are the most common conditions treated at the hospital; patients with more complex conditions are referred to an associated hospital, the L.V. Prasad Eye Institute in Hyderabad.

Vision for All has also begun working in the Democratic Republic of the Congo, in Lubumbashi and in Brazzaville in Congo, Mermoud said.

To tackle the growing problem of glaucoma, Mermoud said public health officials needed to increase the number of ophthalmologists, particularly in Africa, and to train those already in place, in countries such as India, in the diagnosis and treatment of glaucoma.

More work is needed to make medicines more affordable and more resources are needed for research to develop surgery that will be more efficient on African and Asian patients, Mermoud said.

Bulletin board: have your say

Readers now have the opportunity to comment on recently published articles that have appeared in the Bulletin, in the form of an informal letter to the editor. These comments will then be published on the Bulletin's web site, after quick editorial review, under our new "Bulletin board" section and a selection will be chosen to appear in the print version of the journal. Please visit our web site at http://www.who.int/bulletin/en/ to access the latest articles and email your contributions to: bulletin@who.int.