Micronutrient deficiencies are damaging the health of one-third of the world's population and hampering the economic development of nearly every country in the Southern Hemisphere says a new report released on 21 January at the 2004 World Economic Forum in Davos, Switzerland, by UNICEF and the Micronutrient Initiative, a Canadian- based non-profit organization.

Vitamin and mineral deficiency: a global damage assessment (available at http://www.unicef.org/media/files/davos_micronutrient.pdf) concludes that current efforts to remedy micronutrient deficiencies in the world's poorer nations are inadequate and will remain so without new and more aggressive policies. According to the report, micronutrient deficiencies have left 2 billion people living below their physical and mental potential and are having devastating consequences on children. Worst affected countries include Afghanistan, Pakistan, Cambodia, Ethiopia and most West and Central African nations.

"It's no longer acceptable to simply identify symptoms of micronutrient deficiency in individuals and then treat them," said UNICEF Executive Director, Carol Bellamy. "We have to protect entire populations against the devastating consequences of vitamin and mineral deficiency, especially children."

The report summarizes results from nutritional status studies undertaken in 80 countries and identifies four target nutrients crucial to health and development both in utero and in childhood: iron, vitamin A, iodine and folate. Iron deficiency impairs mental development in young children and results in a lowering of national intelligence quotients. It also undermines adult productivity, with estimated losses of as much as 2% of gross national product while anaemia resulting from severe iron deficiency causes deaths during childbirth of an estimated 50 000 women each year.

Lack of vitamin A has left up to 40% of children less than 5 years old in the developing world with compromised immune systems, leading to the early deaths of one million young children every year.

Iodine deficiencies cause up to 20 million babies to be born with mental defects every year whilst folate deficiency results in about 200 000 severe birth defects annually such as spina bifida, encephalocoele and anencephaly.

"There's no excuse for not reaching every human being with these simple but life-saving micronutrients," Bellamy said. "We know what needs doing, we just have to do it."

Ian Darnton-Hill, UNICEF's Senior Advisor for Micronutrients, said that fortification of food staples like flour, salt, sugar, cooking oil and margarine, and the distribution of vitamin supplements to at-risk groups, would be the most effective strategies.

Fortification  already used successfully for decades in the industrialized world  could have an immediate effect on micronutrient deficiencies, according to the report. For example, if wheat flour were fortified with iron and folic acid, iron deficiency could be reduced by 10% and birth defects could be lowered by a third in the neediest countries in about five years, according to Ibrahim Daibes, Communications Manager at the Micronutrient Initiative. Such fortification would cost a total of about US$ 85 million  only US$ 0.4 per person.

"Our intent is to encourage individual countries to start tackling the micronutrient problem on their own, but we recognize they will need help," Daibes said.

The Global Alliance for Improved Nutrition, launched at a UN Special Session in May 2002, was created to pave the way. Chiefly funded by the Bill and Melinda Gates Foundation, the organization's mission is to help governments and food producers in needy countries start their own iron, iodine and folate fortification programmes. As to vitamin A, the Micronutrient Intiative will work with governments and nongovernmental organizations to expand supplement distribution programmes in countries that already have them and develop new ones in those that don't. 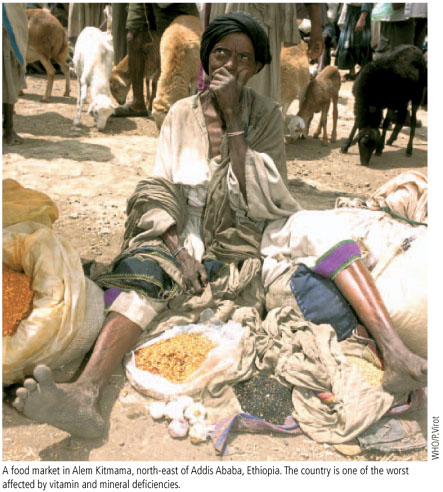 The report also launches an information campaign that is targeted at government agencies, media outlets and food producers in at-risk countries, highlighting the damage caused by vitamin and mineral deficiencies and emphasizing the affordability of the solutions.

Whilst fortification and vitamin distribution would have a significant impact on micronutrient deficiencies in poor countries, most public health professionals agree that these strategies alone are not enough to eradicate the problem, said Bruno de Benoist, Acting Director of WHO's department of Nutrition for Health and Development. "Supplementation is important but it won't solve the problem without concurrent improvement of diet, sanitation and infectious disease control," he said.