The lives of up to one million people affected by the conflict in the Greater Darfur region, in the west of the Republic of the Sudan, are at risk unless there is an urgent scaling up of the current international response, warned WHO following a meeting at the UN in Geneva on 3 June.

The UN estimates that between 700 000 and 800 000 people in the region are expected to run out of what they need to survive by the end of June. Andrew Natsios, head of the US Agency of International Development, predicted that the death toll could reach one million if humanitarian organizations are unable to deliver aid to the war-torn province.

"We estimate right now if we get relief in, we'll lose a third of a million people, and if we don't the death rates could be dramatically higher, approaching a million people," said Natsios, following the meeting which brought together senior officials from donor nations, the Sudanese Government and UN agencies to intensify their response to a situation described by UN Under-secretary General for Humanitarian Affairs, Jan Egeland, as the "biggest humanitarian crisis in the world today." 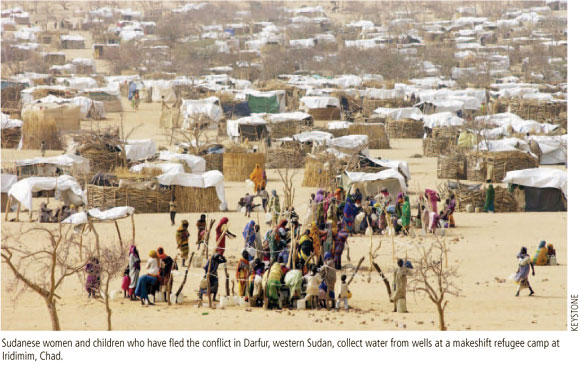 In a statement to the UN Security Council on 24 May, the international nongovernmental organization, Médecins Sans Frontières, described "excessive levels of death and malnutrition among a displaced population that is entirely dependent on aid." It went on to warn that "relief efforts remain utterly inadequate and all indicators point to a looming famine."

Adding to the urgency is the approaching seasonal monsoon, already heading northwards into eastern Chad and Darfur, which could leave 150 000 refugees who fled across the western border into Chad isolated with no access to aid. The rains will bring an increased risk of cholera, dysentery and malaria.

WHO Director-General, Dr LEE Jong-wook warned of the dire effects disease epidemics could have in an already weakened population. "Death and disease spiral upwards when there is inadequate food, unsafe water, improper sanitation and shelter, widespread violence, lack of public health inputs like vaccinations and insufficient access to medical care," said Lee. "These are the realities of the current crisis in Darfur."

At the beginning of June, an early warning system for monitoring and responding to disease outbreaks began operating throughout the region. The model has already been deployed successfully by WHO in Iraq and other challenging settings. The population under surveillance comprises the 1.2 million people displaced from their villages and homes as a result of the conflict, 40% of whom have no access to health care, according to WHO.

The conflict in Darfur began early last year after rebel groups started attacking government targets, claiming that the region was being neglected by the government. The ensuing conflict has affected around two million people in total, of which around 1.2 million are internally displaced persons (IDPs). Located in 124 locations, spread around a very wide desert and semi-desert area, only about 760 000 of the IDPs were accessible at the beginning of June. An estimated 10 000 people have been killed since fighting began in February 2003.

The UN warned of an imminent humanitarian crisis in Darfur in October 2003 when it appealed for extra resources. However, it is only recently that funds have been pledged. At the beginning of June, the UN still faced a funding gap of US$ 236 million needed for aid in the region until the end of the year. The US pledged US$ 188 million and the European Union pledged over US$ 12 million, in addition to the US$ 45 million it had already provided. WHO is seeking US$ 7.6 million to assist the Sudanese Government in coordinating the response of the international health sector and to tackle disease outbreaks, improve sanitation, respond to public health needs and improve access to medical care. It has so far been promised US$ 3.9 million for its response.

"Delivering much-needed aid is an immense challenge in Darfur because people are scattered over a vast land area, and communications have been badly disrupted," said Dr Hussein Gezairy, WHO Regional Director for the Eastern Mediterranean Region. "Accessing those in need requires intense collaboration by all."

The United Nations refugee agency, UNHCR, which has been working to provide relief for the Sudanese refugees in Chad is to launch an appeal in mid-June for US$ 55.8 representing an increase of US$ 35 million over their previous appeal. "The increased budget takes into account the ongoing arrival of new refugees in Chad and plans to help 200 000 refugees by the end of the year," said UNHCR spokesperson Kris Janowski.

Recent reports have highlighted continuing increases in levels of malnutrition (doubling each week in some settings), diarrhoea, measles and deaths. WHO and UNICEF began a measles immunization programme in early June hoping to reach 2.26 million children by the end of the month.

"Almost a quarter of the children are already showing signs of malnourishment, making the threat of the measles virus even greater," said Carol Bellamy, UNICEF Executive Director. Vaccinators are also using the opportunity to provide life-saving vitamin A supplementation and to immunize at least 90% of children under five years against poliomyelitis.

The UN and other nongovernmental organizations have experienced difficulties in getting aid into Darfur over the past few months. WHO has welcomed recent assurances from the Government of Sudan that permits for humanitarian workers to travel from Khartoum to Darfur will be issued within 48 hours and that the movement of relief supplies will be facilitated.

The latest on the health situation in Darfur is available from: http://www.who.int/disasters