Hand-washing could save the lives of millions of children

Parents and other household members who wash their own hands carefully and regularly with soap as well as the hands of infants who are too small to do it themselves could halve the rate of deadly diarrhoea, according to a new study.

A team of researchers led by Dr Stephen P. Luby from the Atlanta-based Centers for Disease Control and Prevention in the United States conducted an intensive programme of hand-washing education and promotion among 906 families with 4700 children.

According to Luby, although washing hands with soap is a well-known disease prevention measure, his study is the first to focus on washing the hands of infants under 12 months who are too young to wash their own hands but are at highest risk from diarrhoea- related diseases.

"It is remarkable that hand-washing with soap led to a marked reduction in diarrhoea without improving water quality, even among malnourished children who are at increased risk of death from diarrhoea," said Luby who reported that the water used for drinking and washing available to the communities participating in the study was highly contaminated with sewage.

"The study re-emphasises that behavioural changes can have an impact," said Dr James Bartram, Coordinator of WHO's Water, Sanitation and Health Programme. However, access to safe water remains a prerequisite for maintaining hygiene and to further reducing diarrhoeal disease  88% of which is attributed to unsafe water supply, inadequate sanitation and hygiene, said Bartram.

Families participating in the study published in JAMA (2004;291:2547-54) lived in urban squatter settlements in Karachi, Pakistan, and had at least two children younger than 15, at least one of whom was younger than five.

The team visited these households weekly from April 2002 to April 2003 to show them how to wash hands properly with soap after defecation, and before preparing food, eating, and feeding a child. They used slide shows, videotapes and pamphlets to illustrate health problems resulting from contaminated hands. 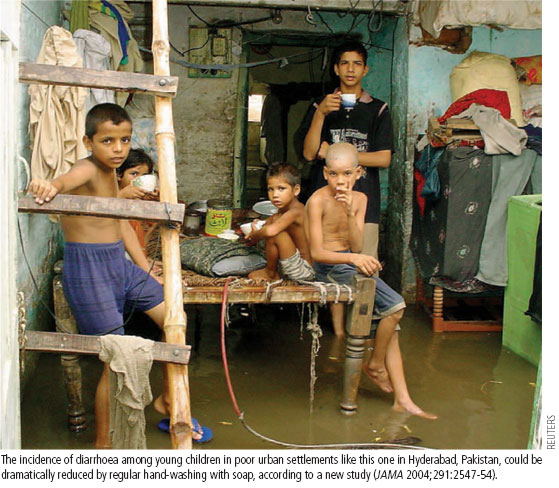 According to WHO, 1.8 million children die every year from diarrhoeal diseases and 90% of those are aged less than five years, mainly in developing countries. The study's findings suggest that half of those lives could be saved. It also suggests that vigorous public promotion of hand-washing, particularly among those without reliable clean water supplies, could have a major impact on health.

Whilst recognizing the important role played by governments in the promotion of hand-washing as a cost-effective way of fighting diarrhoea, Bartram also said that the key question for policy-makers is how to sustain that hygienic behaviour: "People make an effort to wash their hands during a study like this, but how long is it before that behaviour tails off?"