A few low- to middle-income countries have developed new drugs to address their public health needs while other developing countries have found innovative ways to be more active in the global multibillion dollar R&D pharmaceuticals business which is concentrated in industrialized countries.

In the late 1970s, a small Croatian pharmaceuticals company called Pliva developed an original antibiotic called azythromycin. In early trials, it proved to be effective and able to stay longer in the body tissue of animals than similar antibiotics.

At the time, the company lacked the capital to market and distribute the product worldwide. In 1981, Pliva patented the product globally and this led to a licensing agreement under which Pfizer Inc. of the United States bought the rights to sell azythromycin worldwide while Pliva continued to sell it in Central and Eastern Europe.

Today Zithromax  Pfizer's version of azythromycin  is one of the biggest selling branded antibiotics in the United States.

Producing a blockbuster drug  with more than US$ 1 billion annual sales  came true for Croatia but remains a distant dream for most middle- and low-income countries.

It's not easy with limited funds, weak infrastructure and little or no hi-tech equipment and even when researchers in developing countries find a promising product, regulatory bodies often lack the staff and expertise needed to ensure that clinical trials are ethical and new drugs are safe.

Yet despite the challenges some developing countries including Brazil, India, Indonesia and South Africa have over the last decades built up expertise in producing generic copies of R&D products to address public health needs.

Of some US$ 105.9 billion annually spent on global health research, only a fraction  4%  or a rounded-off US$ 4.3 billion, is spent by middle- and low-income countries, according to the Global Forum for Health Research.

Most of that  2.4% or US$ 2.5 billion  is public sector-funded. The remaining amount rounded off to US$ 1.8 billion is private sector funding. The Global Forum said this includes: US$ 1.35 billion from foreign and domestic pharmaceuticals, US$ 80 million from domestic private funds and US$ 300 million from the private non-profit sector.

Some public health experts question whether the US$ 4.3 billion would not be better spent on good-value drug procurement deals. 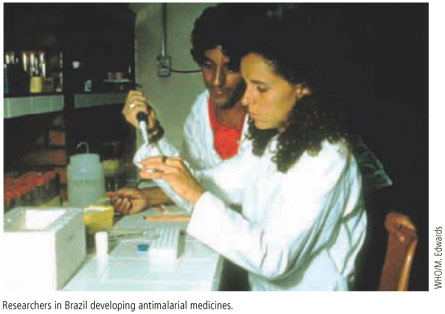 Indeed, many developing countries still find it cheaper to import rather than to produce drugs. But since patented R&D products are prohibitively expensive for some, smaller developing countries are importing drugs from regional economic powers: such as Brazil, India and South Africa.

Cuba is one of the few developing countries to be successful in biotech research. The Centre for Genetic Engineering and Biotechnology in Havana has produced several recombinant molecules such as interferons (proteins to fight viral infections), a hepatitis B vaccine, streptokinase (an agent used in medicines for heart disease), epidermal growth factor (a protein used in cancer medicines), and other products.

These help address public health needs in Cuba and attract revenues with exports to more than 50 countries.

The Republic of Korea's R&D in pharmaceuticals has also played a role in the country's spectacular rise from a low-income developing country in the 1950s to a major economic power.

South Africa, where about 10% of the population is HIV positive, is developing a promising vaccine tailored to its specific health needs. Most HIV vaccines being developed are for virus subtype B, the dominant strain in the United States and Europe, but there is no certainty these would be effective against subtype C of the AIDS virus which accounts for more than 90% of HIV infections in southern Africa.

The project has state and private sector funding and aims to produce a vaccine for subtype C. It was initiated by South Africa's Medical Research Council. Phase I trials started in 2003.

India's generic drugs industry has pioneered fixed-dose combination antiretroviral medicines. These are not only more affordable for poor countries with high HIV infection rates, but these two- or three-in-one pills and blister packs make it easier for patients to follow treatment.

By copying and combining two or three drugs, each originally developed by a different R&D company, Indian companies Cipla and Ranbaxy have have come up with competitive products unmatched by R&D originators like multinational, GlaxoSmithKline.

That success underscores one of the greatest challenges to drug production in developing countries: ensuring that medicines meet international criteria for quality, safety and efficacy.

A report to the World Health Assembly in May 2004, called on WHO's 192 Member States to cooperate more closely on drug regulation to address the need for more stringent regulation in developing countries.

This is particularly pressing in India which will be more reliant on R&D drug innovation from January 2005, when it joins the international patent system and can no longer copy new patented drugs.

He was optimistic about the sector's prospects as a whole, citing advantages such as lower researchers' salaries and manufacturing costs.

"One advantage is that we have a large patient pool for clinical trials. Also, from discovery to pharmaceutical toxicology and clinical trials things go fast," Gupta said.

In India, researchers are looking to Ayurveda traditional medicine to find plants or herbal remedies that can be converted into modern medicines.

In South Africa, researchers are investigating a diverse plant life for new active ingredients which includes Fynbos, one of the world's six floral kingdoms that is unique to the country.

Dr William Pick, President of the Medical Research Council of South Africa told the Bulletin that researchers were working with 20 promising compounds or molecules derived from indigenous plants to find medicines to treat malaria and tuberculosis. Pick acknowledged the difficulties: "We lack laboratory facilities and hi-tech equipment and financing of projects is difficult."

In China, the Artemisia annua plant was used for centuries in traditional medicine to combat fever. Today its derivatives, usually combined with synthetic compounds, are active ingredients in several antimalarial drugs.

Rather than trying to produce the medicines itself, China has become a major exporter of artemisinin to industrialized countries, but this could change in view of the trend of outsourcing.

China has recently started to make its highly educated scientists available to companies looking to outsource some of their R&D activities for a fraction of the cost of their counterparts in industrialized countries.

Big pharmaceuticals companies contribute molecules, manpower and machines to non-profit groups which coordinate product development and are backed by private foundations or governments of developing countries.

There are 23 PPPs working on drugs, 16 on vaccines and 20 on non-pharmaceutical products, such as antimalarial nets. Two of those, Medicines for Malaria Venture and the International AIDS Vaccine Initiative, have several products in clinical trials.

Pharmaceutical foundations have also opened research centres for neglected diseases in developing countries: for example, Novartis in Singapore for tuberculosis and dengue and GlaxoSmithKline in Spain for developing medicines for diseases that affect those countries, such as malaria and tuberculosis.