WHO was where in December

 On 1 December, World AIDS Day, the WHO web site featured the real-life stories of three of some 17.6 million women living with HIV/AIDS across the world. The series, which is entitled: Have you heard us today?, profiles Balabwa, 22, from South Africa, Phala, 24, from Cambodia; and Francine, 48, from Rwanda and underscores how women are biologically and socially more vulnerable to HIV infection than men.

 WHO announced on 1 December that 40 countries had ratified the Framework Convention on Tobacco Control (FCTC) and that the tobacco control agreement would come into force on 27 February. From then on, the 40 countries  and others that subsequently become parties  will be legally bound by treaty provisions on: increasing the price of and tax on tobacco to make it less attractive; restricting tobacco advertising and sponsorship; labelling that spells out the health risks of tobacco consumption; the illicit trade in cigarettes and other tobacco products; and provisions to protect people from second-hand smoke.

 WHO said on 1 December new data indicate that pregnant women and very young children derive even greater benefits from anti-parasite drugs than had previously been thought. Such drugs have long been used to treat school-age children in campaigns worldwide to improve health and educational outcomes. Experts told a November meeting in Geneva of the Partnership for Parasite Control, hosted by WHO, that the drugs contributed to improvement in the survival chances of infants and pregnant women and to combating anaemia and iron deficiency.

 Ministers of health and finance, aid donors, senior representatives of the global development community and charitable foundations gathered in Abuja, the Nigerian capital, on 23 December to review progress on the Millennium Development Goals. They called for increased funding from national governments and donors, better coordination between donors to manage aid and urgent action to address a massive shortage of health workers, particularly in southern Africa, (see story on p. 5) as well as greater attention to crisis-hit "fragile states". The High-Level Forum meeting was hosted by the Government of Nigeria and organized by WHO and The World Bank.

 French football star Christian Karembeu lent a touch of glamour on 10 December to WHO's HIV/AIDS Department, by promoting a cartoon booklet called HIV/AIDS: Stand Up for Human Rights aimed at fighting the stigma and discrimination attached to being HIV-positive. The booklet is being distributed by five of FIFA's (Fédération Internationale de Football Association) national football associations: Botswana, Ghana, South Africa, Uganda and Zambia to promote more awareness of the disease.

 On 13 December Togo launched a nationwide campaign to vaccinate one million children aged under five years against measles and polio and provide them with two other life-saving interventions: mosquito nets to prevent malaria and deworming tablets. The Togo campaign involving thousands of volunteers aimed to gauge how effectively this approach can deliver multiple treatments. Until now, public health multitasking has been successful on a smaller scale, but it has not been tried on a national level, WHO said.

 In a groundbreaking project sponsored by WHO, Israeli and Palestinian health professionals have joined forces to co-author a new health journal called: Bridges: the Israeli-Palestinian Public Health Magazine. The first edition of the bimonthly journal was published in December. It is written, edited, produced and managed jointly by Palestinian and Israeli academics and health professionals. The goal is to help improve the health situation for people in West Bank and Gaza Strip and establish links between the two communities. http://www.healthinforum.net/files/who/bridges.pdf

 The Government of the Philippines and the United Nations appealed on 15 December for US$ 6.4 million after four typhoons and tropical storms swept through the north-eastern part of the country in late November and early December killing 1060 people and injuring 1023. WHO said 880 000 people have been displaced by floods. WHO is helping health authorities in the stricken region to prepare for and control malaria outbreaks and with emergency response coordination in general.

 A new WHO country office web site for Ethiopia went live on 17 December and can be found at: http://www.who.int/countries/eth/en/

For more about these and other WHO news items please see: http://www.who.int/mediacentre/en/ 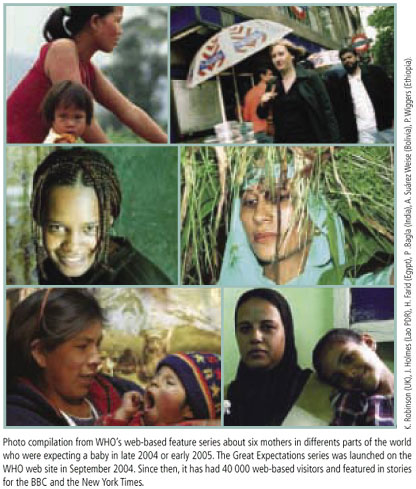 SciELO Analytics
Dimensions
WHO was where in December
PlumX