Treating malaria at home in Uganda

A novel approach  home-based care  provided by an army of volunteers could be key to beating malaria in developing countries. Uganda is one of nine countries where studies are under way to test the approach, but there are concerns about drug resistance.

Elsie Nakirya, 66, heard her granddaughter Paula Nakafu, 6, moan uncharacteristically in her sleep. A quick check with her palm on the child's forehead "confirmed" a high temperature.

"I sponged her off until morning, then went to a drug store and bought chloroquine syrup and a tablet of Fansidar [sulphadoxine-pyremethamine (SP)]," said Nakirya, a resident of Makerere West, a suburb of Kampala.

Two days later, in spite of treating her with chloroquine and SP, Paula did not recover. Instead she developed a rash and that was when the grandmother who lives with three of her grandchildren, visited the doctor who confirmed Paula had measles.

It's hard enough for a doctor to diagnose malaria without a laboratory, but for families with limited access to health care it's even more difficult because the early symptoms are similar to those of other diseases.

While measles is relatively rare in Uganda and most cases of fever in children aged under-five can be attributed to malaria rather than other diseases, Paula's example underlines the problem of getting an accurate diagnosis. Delays in getting appropriate treatment for malaria in sub-Saharan Africa and inadequate access to that treatment can be fatal.

Paula's grandmother not only misdiagnosed her, but also treated her for the wrong disease. Yet for people with limited access to health workers and health-care facilities, this hit-and-miss approach remains the only option in Uganda and elsewhere in Africa.

One study showed that in places, such as these, where health care is not always available, home-based treatment of fever with antimalarial drugs still has the potential to dramatically reduce the number of child deaths from malaria.

In 2000, Gebreyesus Kidane and Richard Morrow reported in the Lancet a 40% reduction in under-five child mortality after mothers in Ethiopia were given simple training in recognizing fever and supplies of chloroquine for treatment at home.

Catching the malaria early with prompt treatment can stop it from progressing to a more severe and often fatal form.

In 2002 , the Ugandan government formalized the already common practice of treating fevers without visiting the doctor by introducing the home-based management of fever strategy. That strategy involved teaching mothers to recognize malaria symptoms at an early stage in their children. Sick children were then taken to see a community volunteer, known as a community medicine distributor.

These volunteers were trained to distinguish between the fever of uncomplicated malaria and the signs and symptoms associated with the more severe forms of the disease, as defined by using the Integrated Management of Childhood Illness approach. If the volunteers suspected severe malaria, the child was sent to the nearest health centre with trained health personnel, otherwise, the child was given a pre-packaged combination of chloroquine and SP, known as HOMAPAK.

Dr Monica Olewe from WHO's Uganda Country Office said that this chloroquine and SP combination was specially developed for home-based care, one of a number of approaches in Uganda for reducing malaria deaths.

But in 2004, in the face of widespread resistance to chloroquine and SP in Uganda, government drug policy changed. "Home-based treatment of malaria using chloroquine and SP didn't have a big effect. One major factor was that the malaria parasites were already resistant to the drugs," said Professor Umberto D'Alessandro from the Prince Leopold Institute of Tropical Medicine in Antwerp, Belgium.

Because these drugs no longer cure malaria reliably, artemisinin combination therapy (ACT) drugs, such as Coartem (artemether-lumefantrine), are now recommended by WHO. Research sponsored by the Special Programme for Research and Training in Tropical Diseases (TDR) is now looking at whether this particular two-in-one combination drug can replace the combination of chloroquine and SP in Uganda and eight other African countries in the home-based management of fever programme. 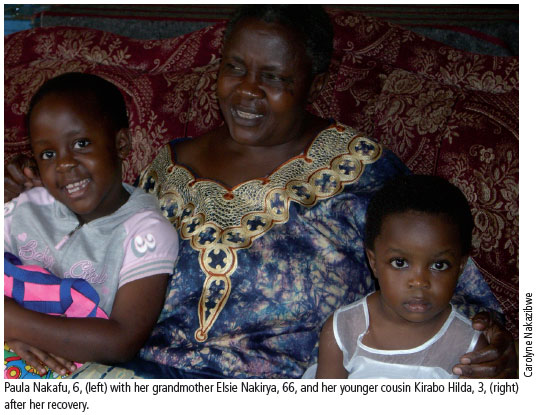 "The objective of the research is to find out if using artemether-lumefantrine in the home-based management of malaria in Uganda is feasible, acceptable, safe and effective," said Dr Franco Pagnoni, a research manager from TDR in Geneva.

The Uganda research team aims to find out if artemether-lumefantrine can be used for home-based treatment of malaria in two districts in eastern Uganda where malaria is a major problem, Iganga and Bugiri.

The principal investigator in the study is Fred Bateganya from Makerere University's Faculty of Sociology. His team has been working with 118 community medicine distributors since June 2006, who have been trained for two days at the sub-county health facility. They are given artemether-lumefantrine to distribute to children with symptoms of fever in 56 villages. The team assesses the effect of unsupervised treatment with ACTs on the health of patients, as well as how storage of the drug affects its efficacy.

According to WHO estimates, between 70 000 and 100 000 children aged under five years die in Uganda annually of malaria. On average, a child in Uganda has four malaria episodes a year, and any of them could be fatal.

"We will get samples of the medicine randomly from community medicine distributors and test it in the National Drug Authority laboratories in September," Bateganya said, referring to the volunteers who store the artemether-lumefantrine on behalf of the community. A mid-term evaluation report on the Iganga-Bugiri research will be ready by January 2007, Bateganya said.

Everyone acknowledges the risk that malaria parasites could develop resistance to antimalarials if they are given out in an uncontrolled way.

"There are no data available on the effects of ACT when it is given by mothers to their children without proper diagnosis. It should reduce mortality, but we simply don't know if it does," D'Alessandro said. He also questions the general applicability of the findings of the Ethiopian study, published in 2000, given that this study was done with chloroquine rather than ACT.

The treatment regimen is slightly more complicated for artemether-lumefantrine than for chloroquine and SP, requiring patients to take two tablets per day preferably with a fatty meal, for three days. Patients needed to take chloroquine and SP over three days to be cured. Unless patients take the full course of artemether-lumefantrine, the malaria may rebound, but there is also the chance that the parasites causing the disease could develop resistance to the drug.

Pagnoni said that TDR is addressing this concern in Uganda by checking that mothers comply with the treatment regimen. He cites a study he co-authored and published in Tropical Medicine and International Health in July 2006, which showed that about 90% of caregivers in Ghana gave the correct artemether-lumefantrine dose. Similar studies are underway in Benin, Burkina Faso, Cameroon, Ethiopia, Malawi, Nigeria and the United Republic of Tanzania.