Street food vendors provide cheap meals for thousands of Accra's citizens but concerns over foodborne diseases have led to efforts by the Ghanaian authorities to improve food safety and encourage vendors to adopt more hygienic practices.

Gloria Tawiah's ready-made meals of fufu, banku and rice sell for as little US$ 0.02. For many of the city's poorest people she and other vendors offer the only chance of a square meal. And when customers are short of cash, vendors offer meals on credit.

Tawiah is one of thousands of street food vendors in the Ghanaian capital who help to feed travellers, commuters, workers and school children.

But despite the importance of Tawiah's role in the local economy and the fact that she has been selling food for 12 years, she attended a workshop on food safety for the first time this year.

They taught us how to handle and cover food, what type of food items to buy," said Tawiah, who now has a licence from the Accra Metropolitan Assembly to sell food and who belongs to the Ghana Traditional Caterers Association. "It was very useful".

Workshops teach vendors to wash their hands before cooking and to disinfect vegetables grown in fields irrigated with dirty water and fertilized with animal faeces.

Most of the food served on the streets of Accra is safe. Traditional preparation methods, such as a long cooking time, which sterilizes the food, and lactic acid fermentation, which kills some food spoilage bacteria, already provide protection.

But research published in the Bulletin in July 2002 showed that salads, re-heated soups and sauces, and dishes served with bare hands contained high levels of potentially dangerous enteric bacteria. 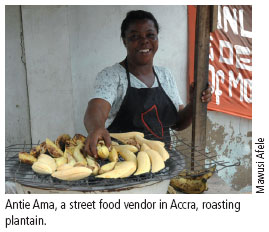 Street vendors like Tawiah in Accra say they were unaware of the dangers until they attended the workshops and could unintentionally have been poisoning some of their customers.

"Vendors were horrified when we told them that their food was potentially hazardous," said Keith Tomlins, a food safety and quality scientist at the Natural Resources Institute at the University of Greenwich in the United Kingdom.

Since 1999, Tomlins has been involved in three food safety studies in Ghana funded by the Crop Post-Harvest Research Programme of the United Kingdom's Department for International Development (DFID).

Initially, the work set out to describe the various contaminants found in street food, but the investigation expanded its brief.

"As our study progressed, we realized that producing a report was not enough and that we also had to engage with stakeholders at all levels to push home our recommendations. Previous studies had little effect because no one heard about them outside the scientific community," Tomlins told the Bulletin.

In the first project, Tomlins and his colleagues estimated that there were 60 000 street food vendors in Accra with a combined annual turnover of US$ 100 million.

The other two projects have aimed to forge better cooperation between government, regulators and the street vendors themselves: for example, by providing workshops on food safety, personal hygiene and sanitation.

Street foods are of growing importance in developing countries across the world. "There's a shift towards eating food prepared outside the home. Some people view it as a mark of affluence," said Professor Patience Mensah, Regional Adviser for food safety at WHO's Regional Office for Africa, who has studied Accra's street foods.

"Although street foods could be a source of foodborne pathogens, they assure the food security of the poor, provide employment and service the tourist trade by providing traditional foods," Mensah said.

"Street food vendors are considered a useful segment of the economy, but there is a big problem about consumer awareness. People are not well educated about safety," said Dr Paa-Nii Johnson of the Food Research Institute in Accra, who was involved in the DFID projects. 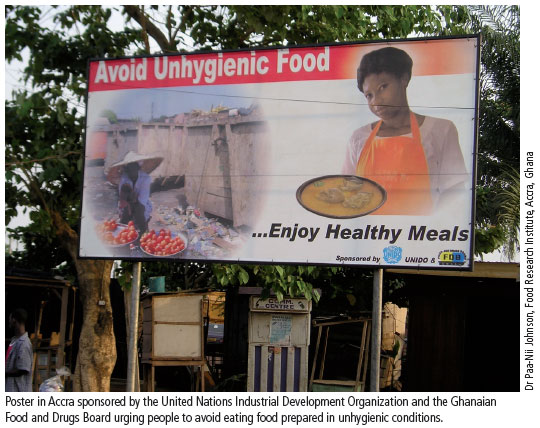 In an effort to address this problem, the United Nations Industrial Development Organization (UNIDO) sponsored a series of giant posters on billboards in Accra with graphic illustrations of the potential dangers of eating street food.

Johnson noted that vendors had minimal or no formal education, many  unlike Tawiah  were unlicensed and untrained in food hygiene or sanitation and worked under insanitary conditions.

At the moment, the city authorities grant permits and health certificates to vendors after medical screening of vendors and testing of their knowledge about food hygiene.

Environmental health officers also inspect the sites and monitor conditions, and close down unhygienic places or send offenders to court.

Adotey suggests that the central government should designate areas for street food vendors providing running water and electricity. This would create a more hygienic environment and supervision of the trade could also be better.

The government could also improve the working conditions of environmental health inspectors and encourage them to carry out more rigorous inspections, Adotey said.

Government or banks could loan funds to street food vendors. There is also a project to improve the standards of hygiene and quality of food in Ghana's popular eating places known as "chop bars".

But Johnson said that the government and city authorities have failed to address fully the needs of the sector, for example, by providing hygienic places for street vendors to ply their trade and credit facilities to finance improvements in the conditions under which food is prepared and sold.

Tawiah, the street food vendor, now knows how to prepare and sell food in a more hygienic way, but she still has to cook dishes in the open at a lorry park, which is unpaved and dusty, and where she must buy clean water from a nearby standpipe.