Women health workers have been vital in improving the health of women and children in Pakistan. Inspired by its neighbour's experience, Afghanistan is embarking on a similar programme to encourage women to work in the health sector.

Khalda Perveen ventures where trained doctors rarely dare to go. She is among more than 90 000 Lady Health Workers who are working to increase health awareness and improve child and maternal health across Pakistan, particularly in poor rural areas where three-quarters of the country's population live.

"In remote areas where there are no doctors, Lady Health Workers perform an important role: we go to areas where other health professionals won't go," Perveen, 29, said. "But still some people don't accept us and think that as women ... we shouldn't be working."

Run by the Pakistani government's National Programme for Family Planning and Primary Health Care, the Lady Health Workers scheme was launched in 1994 to reach out to remote, tribal communities where strict adherence to social and religious customs has long hampered women's ability to work as health workers and seek health care.

Similar traditions exist across the border in war-torn Afghanistan, where maternal and under-five child mortality are high. More women  an estimated 1600 per 100 000  die in childbirth than in any other country, bar Sierra Leone, according to WHO. Child mortality is also among the world's highest. According to WHO's most recent estimates, 257 children in Afghanistan die out of every 1000 born.

Afghanistan has much work to do after two decades of conflict and neglect  particularly during the 1992-96 civil war and subsequent Taliban reign  left the country's health system in tatters.

Now the country is embarking on a programme similar to that of the Lady Health Workers that is credited with significantly improving health care across Pakistan. 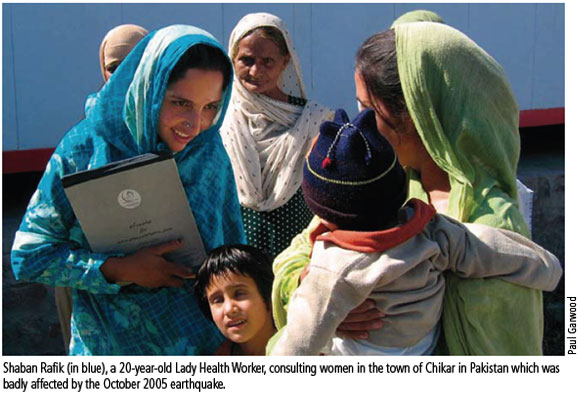 Great distances from homes to health centres, widespread illiteracy that limits educational and employment aspirations of women, and tribal customs that forbid women to work or be visited by male heath workers compound difficulties faced by many Afghan and Pakistani women and children seeking health care.

That is why Nagis, an Afghan woman aged in her 30s and who uses just one name, gave birth at home recently to a daughter who died several days later. She said that during her pregnancy she couldn't go to the clinic in her village of Rabat, north of the Afghan capital of Kabul, because there were no female doctors or midwives there.

"It is generally considered taboo here for men to treat women," Nagis said.

Pakistan has been tackling the barriers to women receiving basic health care by training an army of Lady Health Workers to raise health awareness among communities that are cut off from hospitals and health centres by social barriers and distance, Dr Zareef Khan, Deputy National Coordinator for the programme, said in an interview with the Bulletin.

Khan, an architect of the health worker scheme, said Pakistan's high maternal and infant mortality forced the government to improve the delivery of health services to the population.

Prospective workers do three months in-class training to learn how to provide basic health services, such as family planning, immunization, hygiene, and maternal and child health. Then they do a further 12 months' work experience in the community, before being sent to a village in the area where they come from.

"Pakistan's health system is unable to cater for all the population in rural areas. In some areas, the closest basic health unit is seven kilometres from someone's house," Khan said.

But the Lady Health Workers programme provides at least one worker in every village with a population of at least 1000 (or 150 households).

A. H. Jokhio, H. R. Winter and K. K. Cheng found in their study published in the New England Journal of Medicine in 2005 that perinatal and maternal deaths decreased significantly when female health workers helped train birth attendants and connected them to formal health services.

"I am very happy in the work that I am doing because I am raising awareness and working for humanity," said Sajda Yacoub, who has been a Lady Health Worker in Pakistan for 12 years.

Efforts to introduce similar programmes in Afghanistan are taking shape, but WHO predicts that it could be eight years before enough Lady Health Worker-equivalents are in place.

WHO's representative in Afghanistan, Dr Riyad M. F. Musa Ahmad, said maternal health-care services are unequally distributed throughout the country and most women, especially from rural areas, have little or no access to health care when they are pregnant and give birth.

In some remote Afghan areas, female doctors and community health workers have been introduced to provide obstetric and gynaecological care, Ahmad said.

Afghanistan's Ministry of Public Health, with the support of partners including WHO and UNICEF, is training community midwives and female community health workers to serve in the country's rural areas, where 77% of the population lives.

Based on population data and government targets, Afghanistan needs up to 10 000 midwives to deliver babies and manage life-threatening complications, according to Ahmad. In 2002, Afghanistan had only 467 midwives.

The new initiative's aim is to train 1200 midwives annually so the 10 000 target can be reached in no more than eight years.

Afghanistan also needs between 22 000 and 84 000 female community health workers, similar to Pakistan's Lady Health Workers, but to date just 5000 male and female workers have been trained. 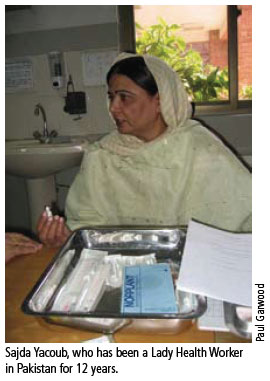