One district in Uganda has dramatically reduced the number of womens' deaths due to pregnancy and childbirth. Now the government is considering how to extend the same level of maternal care to women to the country's remaining 75 districts.

When Dr Godfrey Egwau, a consultant obstetrician at Soroti Regional Referral Hospital's maternity unit, stood for parliament in February, voters knew that if he won he would move to the capital, Kampala, about 280 km away.

Women in Soroti district weighed this and overwhelmingly voted for his opponent. Egwau, who dreamed of going into politics, lost the election.

Many associate Egwau with the high standard of maternal care provided here. He is proud of the district's record, but says the good work is not his achievement alone.

"When I stood for parliament in the last elections, they refused to vote for me, saying 'this is our good doctor, he cannot go!' It's true, we have succeeded, but we need to move away from individualization," Egwau said.

Many women across Uganda give birth without knowing whether they are HIV positive.

But pregnant women, like Connie*, who come to the Soroti hospital receive routine HIV counselling and testing. Of some 500 admissions a month, 30-40 test positive and are provided with treatment to prevent transmission of HIV from mother to child.

When the 22-year-old mother's result was positive, she was given medicine to prevent her from infecting her daughter, counselling, and she was put on antiretroviral (ARV) treatment.

Since February 2005, life-saving ARV medicines have been provided free to patients in Uganda who are HIV positive.

Soroti district became the test ground for a pilot of the WHO programme, Making Pregnancy Safer (MPS) from 2001 to 2004, the central principle of which is to make skilled care available for every birth. Since then, the district has continued to provide this high level of maternal care. Thousands of women like Connie have benefited.

Uganda is one of many countries taking the MPS approach, including Bangladesh, Bolivia, Kenya, India, Indonesia, the Lao People's Democratic Republic, the Republic of Moldova, the Philippines, Timor-Leste, the United Republic of Tanzania and Zambia.

"The success of the Making Pregnancy Safer initiative in Uganda is evidence enough that with proper technical, financial and social support of whatever kind, and by working directly with local governments and health managers, we can make a difference," said Dr Quazi Monirul Islam, Director of WHO's Making Pregnancy Safer Department. 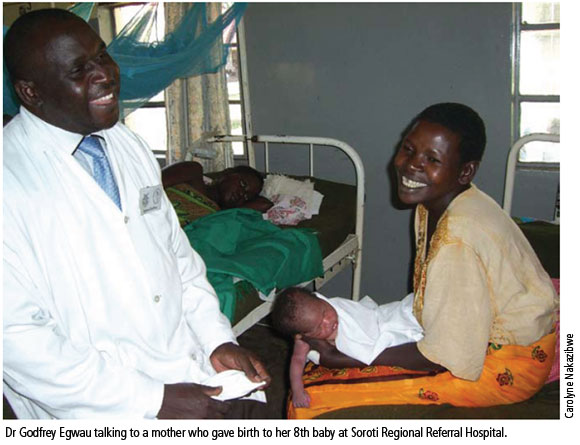 According to a report entitled: Making Pregnancy Safer in Soroti, presented by Egwau in September this year, Soroti district reduced maternal mortality from 750 deaths in 2000 to 190 deaths for every 100 000 live births in 2006.

Under the WHO programme, according to Egwau, 43% of women living in Soroti now give birth with help from a trained health worker, as opposed to 26% before the MPS project started. The national average stands at 38%. The district has also recorded a 100% antenatal attendance (at least one antenatal visit), Egwau said.

Serere Health Centre IV, about 27 km from Soroti town, provides pregnant mothers with most services, including minor surgery. Women are only referred to the main hospital in Soroti if they need a Caesarian section or if there are major complications.

Even when the district suffered a year of insurgency in 2002 by rebels of the Lord's Resistance Army, Kayondo stayed on and drove out in his four-wheel drive to every pregnant mother in outlying villages who contacted him by radio or village phone.

Sometimes he fetches women 20 km away on bad-to-non-existent roads. "They give me rough directions, 'pass the village church and the big mango tree. It is the house nearest to the lake'," Kayondo said.

Of hundreds of pregnant women he has transported since he started five years ago, two died during the journey due to excessive bleeding.

"My business is saving lives. As long as my [ambulance] is okay, I am okay; that is all that matters," said Kayondo, whose ambulance was provided as part of the MPS project.

Despite the lack of resources and shortage of skilled health workers, the principles of Making Pregnancy Safer have been embraced in outlying parts of Soroti district.

Akoboi Community Health Centre is run by a nurse who doubles as midwife. It serves three villages each with 25 community volunteers who scout for cases that need urgent medical attention and educate people about reproductive health, malaria and other health issues.

The centre has no running water or electricity, and has had no medicines since May, but it does have a bicycle ambulance that transports pregnant mothers to Serere Health Centre.

According to one community leader, Akoboi used to lose 30 women a year in child birth while the last year has gone by without a single death of a pregnant mother.

In Kampala, Dr Jacinto Amandua, Commissioner for Health Services at the Ministry of Health, said the government could adopt the MPS model across the country within the existing health budget.

Amandua said the government has been recruiting more health workers and purchased 163 ambulances over the last two years. Access to health centres within 5 km radius has also improved from 49% to 72%, according to the health ministry's Demographic Health Survey. 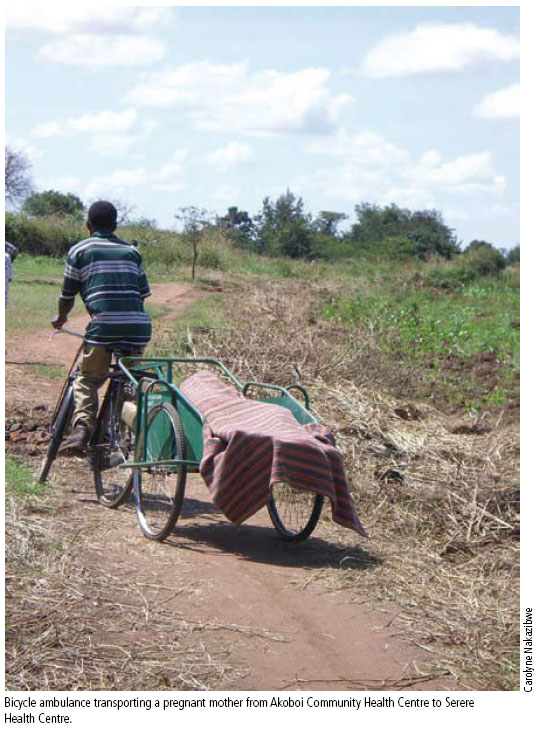 "We think MPS is something that can be duplicated [in other parts of Uganda]. It is something for which investment in health is necessary," said Amandua.