Developing countries have several international trade law provisions at their disposal to help them buy life-saving medicines at affordable prices for public health needs, particularly HIV/AIDS. But only a few countries are using these because of red tape and political pressure. WHO is helping countries navigate the procedural maze.

Developing countries are failing to make full use of flexibilities built into the World Trade Organization's (WTO) Agreement on Trade-Related Aspects of Intellectual Property Rights (TRIPS) to overcome patent barriers and, in turn, alllow them to acquire the medicines they need for high priority diseases, in particular, HIV/AIDS.

First-line antiretroviral (ARV) drugs for HIV/AIDS have become more affordable and available in recent years, but for patients facing drug resistance and side-effects, second-line ARV drugs and other newer formulations are likely to remain prohibitively expensive and inaccessible in many countries. The problem is that many of these countries are not using all the tools at their disposal to overcome these barriers.

Medicines protected by patents tend to be expensive, as pharmaceutical companies try to recoup their research and development (R&D) costs. When there is generic competition prices can be driven down dramatically.

The TRIPS Agreement came into effect on 1 January 1995 setting out minimum standards for the protection of intellectual property, including patents on pharmaceuticals. Under that agreement, since 2005 new drugs may be subject to at least 20 years of patent protection in all, apart from in the least-developed countries and a few non-WTO Members, such as Somalia.

Successful AIDS programmes, such as those in Brazil and Thailand, have only been possible because key pharmaceuticals were not patent protected and could be produced locally at much lower cost. For example, when the Brazilian Government began producing generic AIDS drugs in 2000, prices dropped. AIDS triple-combination therapy, which costs US$ 10 000 per patient per year in industrialized countries, can now be obtained from Indian generic drugs company, Cipla, for less than US$ 200 per year. This puts ARV treatment within reach of many more people.

Several newer AIDS drugs and formulations of existing drugs are urgently needed in developing countries but are not available because pharmaceutical companies are choosing not to sell them, and no generic versions of these are available. For example, there is a new formulation of the ARV combination therapy lopinavir/ritonavir, which unlike its predecessor does not need refrigeration. This would be useful in Africa, where temperatures are high and electricity supplies irregular, but Médecins Sans Frontières (MSF) says it is not available there at all. 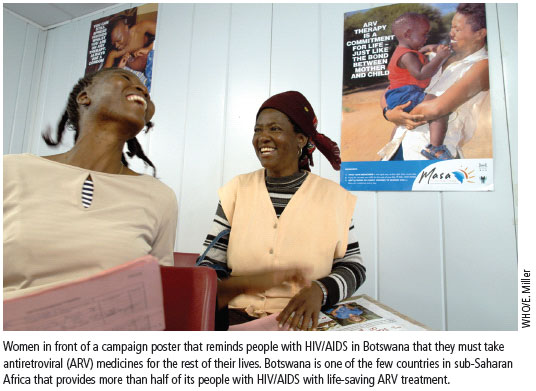 Another example is Gilead Sciences' Tenofovir, a brand-name drug which has significantly fewer side-effects than some older ARVs and was added to WHO's list of prequalified medicines, recommended for UN agencies to purchase for use in developing countries. Tenofovir is, however, virtually unavailable in Africa although it can be an effective second-line ARV, according to Ellen 't Hoen, Director of Policy and Advocacy at MSF. Most AIDS patients eventually need to switch to second-line treatment because of side-effects and drug resistance. However, according to MSF, while the US company has announced a price of US$ 208 per person per year in 97 countries, the product is only registered in 10 of those. Many developing countries cannot pay the normal price for this drug. For example, in Brazil it is US$ 2600 per patient per year and that is the price for just one of three drugs in combination treatment.

Following the TRIPS Agreement, there was growing concern and evidence that patent rules might restrict access to affordable medicines for people in developing countries, particularly for HIV/AIDS, tuberculosis and malaria. This led to the November 2001 Doha Ministerial Declaration which stated: "The (TRIPS) Agreement can and should be interpreted and implemented in a manner supportive of WTO members' right to protect public health and, in particular, to promote access to medicines for all." The Declaration refers to a number of flexibilities, including the right to grant compulsory licences and to permit parallel importation (see box). It also extends the transition period during which least-developed countries do not have to enforce or grant patents on pharmaceutical products until 2016. 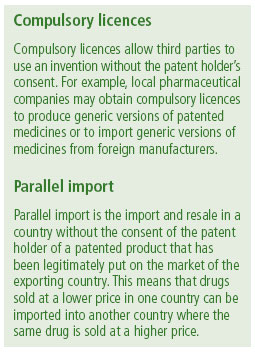 However, countries have been slow to review their patent laws to make the most of the flexibilites within the TRIPS provisions.

Cecilia Oh, from WHO's Departmment of Technical Cooperation for Essential Drugs and Traditional Medicine, tells the Bulletin: "Developing countries are not moving fast enough to put in place the legal framework and systems to ensure they have access to affordable medicines in the future."

Oh adds: "There is a need for a better understanding of how the TRIPS flexibilities can be used to achieve public health benefits. In the case of ARVs, there may be a lack of urgency at the moment as most first-line ARVs are not affected, but these second-line drugs will be. We saw prices of first-line ARVs being dramatically reduced, largely because of competition from generics, but if we don’t have a strategy for ensuring generic competition for second-line drugs then prices may stay high".

One common misconception is that TRIPS requires a country to declare a national emergency before invoking a compulsory licence. Countries are free to determine the grounds for granting compulsory licences, such as broad public health interests. Neither does TRIPS bar countries with limited capacity from using parallel imports to bring in drugs that have been sold at a lower price in another country.

There are a few examples of countries that are making use of the TRIPS flexibilities, and the number is growing. For example, Zimbabwe declared a period of emergency in May 2002 over its AIDS epidemic, authorizing the government to override patents to permit the local production or import of ARV medicines. In October 2003, Malaysia allowed the import of generic didanosine, zidovudine and the lamivudine/zidovudine combination from India to supply its public hospitals, under the government use provision in its patent law. In March 2004, Mozambique granted a compulsory licence for local manufacture of a first-line triple-combination ARV. Zambia issued a compulsory licence, in September 2004, to permit the local production of first-line ARV therapy. Indonesia, in 2004, authorized government use of patents to enable local production of nevirapine and lamivudine. Some least-developed countries now allow the import and use of generic medicines, referring to their right under paragraph 7 of the Doha Declaration not to grant or enforce pharmaceutical product patents until at least 2016.

In South Africa and, more recently, Kenya, voluntary licences were agreed between local manufacturers and the patent-holding companies for the production of ARVs. Although technically these were voluntary, they were only agreed upon following heavy pressure from the government, civil society organizations and local manufacturers.

Sisule Musungu, from the South Centre, and Oh, from WHO, state: "A widespread lack of clarity about the options available, coupled with the lack of local legal and technical expertise to incorporate and implement TRIPS flexibilities in national law and policy are the obvious and major problems."

WHO's Department of Technical Cooperation for Essential Drugs and Traditional Medicine has produced a series of technical documents to help countries understand how TRIPS flexibilities can be used. It has also organized meetings and regional workshops to bring together health ministries, patent offices, and trade and industry people to help them work together to develop a common policy. Cecilia Oh says: "One big problem is that often health and procurement people have little information about intellectual property and patents. As a result they are hesitant to act. It is important that all relevant government agencies, health, trade and patent agencies consult with each other." Musungu says the work carried out by this small WHO department is useful, but more help is needed. "Much greater attention should be paid to the whole issue of intellectual property rights at the very top level of the World Health Organization." 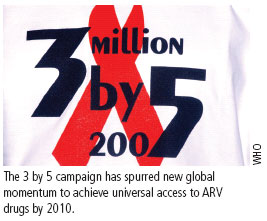 Developing countries that produce lower cost generics and attempt to bring down the price of medicines feel that they are under pressure from industrialized countries and the multinational pharmaceutical industry and tend to be reluctant to make the most of these provisions: "Following the Doha Declaration countries can legally set patents aside, but countries are hesitant to do so because they are afraid of provoking the anger of the United States. The political pressure is enormous," says 't Hoen: "I am worried that things will have to get a lot worse before countries make a move to ensure production through compulsory licences."

The Brazilian case highlights the difficulties that countries can face. Brazil has a strong generics industry that supplies 40% of all ARV drugs used in the country. Brazilian law requires the patent holder to manufacture the product in Brazil and if this does not happen, the government can issue a compulsory licence to another producer. Both provisions are well within the parameters of the TRIPS Agreement. Brazil came under tremendous pressure from the United States  which filed a complaint to the WTO which it later withdrew  first to drop the law and later not to use it. Although Brazil was able to successfully stand up to that pressure, smaller countries may have found the pressure too great and given in. Brazil has, however, not so far issued a compulsory licence to produce second-line ARVs, placing a potential strain on national AIDS funds, 't Hoen says.

Although existing provisions of the TRIPS Agreement permit the granting of compulsory licences to enable generic production of medicines, countries without domestic manufacturing capacity cannot use this flexibility. This is because TRIPS requires production under compulsory licence to be predominantly for the supply of the domestic market. In 2003, the WTO waived this export restriction and the decision is in the process of being made permanent. Under this waiver, countries that do not have their own drug manufacturing capability can issue a compulsory licence so that another country or company in another country can manufacture generic drugs for them.

However, organizations such as MSF have criticized the import mechanism for being unnecessarily cumbersome as it is based on a drug-by-drug, country-by-country and case-by-case decision-making process.

Under the waiver, potential exporting countries must amend their national laws to enable the production and export of generic medicines under compulsory licence. Canada, India, China and Norway have done this while the European Union is considering draft legislation. But so far not a single product has been delivered to a patient under these new rules and no single country has even notified the WTO of its intention to use the system as an importer. This may be because it is too complex and burdensome.

WTO Members recently agreed to convert this system into an amendment of the TRIPS Agreement. The amendment is expected to come into force in 2007, if two-thirds of WTO Members ratify it.

Oh says: "Perhaps countries don't fully understand the system yet. Also at the moment manufacturers in India are still producing drugs that are not under patent. But in two to three years time, most new drugs will come under patent. When this happens, the system may be critical in determining whether or not countries can have access to generic medicines."