In 2003, the San indigenous people (Bushmen) and South Africas state research institute the Council for Scientific and Industtrial Research (CSIR) reached an agreement to share any royalties from potential sales of drugs or other products derived from the hoodia plant, Hoodia gordonii, which has long been known to the San as an appetite suppressor.

It was one of the first agreements to give the holders of traditional knowledge a share of the potential profits of products derived from that knowledge. A few years earlier the plants active ingredient had been patented by CSIR and licensed for further development to a British company which in turn sold additional licences to Pfizer and later to food multinattional Unilever. The San also signed a profitsharing agreement with the South African Hoodia Growers (Pty) Ltd in February 2006.

The appetite suppressant was to be commercialized into a food supplement and/ or prescription medicine, with considerable financial potential, but so far no products have been launched under the profit-sharing agreemment. Recently lawyers representing the San filed complaints to the governments of Switzzerland and Germany about hoodia products produced outside the agreement that were being sold in those countries. They said these sales were in contravention of international agreements on biodiversity. In a letter sent in March 2006, they asked that the obligations of the Biodiversity Convention be honoured and that countries take steps to stop the sale of unauthorized hoodia products. 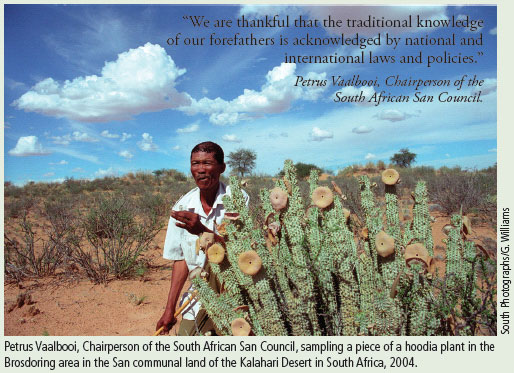 The San live in a region that cuts a swathe across Angola, Botswana, Namibia and South Africa. They are one of southern Africas most marginalized groups.