Patients and many other members of the public have much to gain from a global clinical trials registry initiative launched by WHO. On 19 May, WHO unveiled the rules under which pharmaceutical companies and others doing research must disclose 20 sets of data when they register clinical trials they are planning to do (see boxes on pp. 430431).

Paul Gelsinger, vice president of Citizens for Responsible Care and Research (CIRCARE), a US patients' advocacy group, knows about the shortcomings of clinical trials. Seven years ago his son Jesse participated in a trial of a gene therapy treatment for ornithine transcarbamylase (OTC) deficiency  a condition which kills one in two newborns affected in the first month of life. Jesse, 18 years old at the time of the trial, wanted to give something back to the doctors who had helped him through his first difficult weeks of life. The doctors injected a normal OTC gene spliced with a virus into his liver. His liver hemorrhaged. On 17 September 1999 he died.

"It never occurred to me that the doctors might withhold information," says Gelsinger, who later learned that two monkeys had died in tests involving a gene delivery system like the one used on Jesse, and that four humans had suffered liver damage earlier in the same trial. Gelsinger is convinced that if the database set up by the National Institutes of Health (NIH) and Food and Drug Administration (FDA) had been working as it should, the University of Pennsylvania trial would have been shut down long before Jesse's fatal participation.

It is partly to prevent such violations of patients' rights, that WHO launched a global network of clinical trials registers last month  the first step to establishing a web-based search platform available to the general public.

A primary objective of the network, known as the International Clinical Trials Registry Platform, is increased transparency by requiring any company or institution conducting clinical trials to register the details of how these are going to be done.

Companies or other institutions doing clinical trials will be obliged to disclose 20 items that describe the trial's protocol in the form of a standardized summary. Not everyone is happy about this obligation.

"There is a great deal of reluctance on the part of the pharmaceutical industry regarding full disclosure," says Albert van der Zeijden, chair of the International Alliance of Patients' Organizations in the Netherlands and a keen supporter of the WHO initiative. "But the industry is well aware of the negative image it has at present, and this gives us an opportunity to demand a high level of compliance," said van der Zeijden, referring to recent cases of companies withholding negative research findings that sparked public outrage. Nikos Dedes, of the European AIDS Treatment Group, is similarly optimistic: "This is a unique opportunity," he says, "and no other organization in the world matches WHO's reputation and credibility." 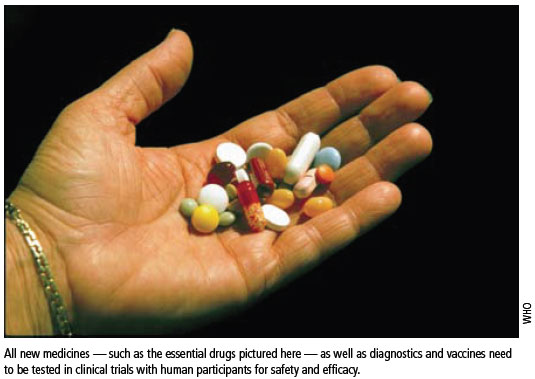 Indeed, there are reasons for optimism. Since September 2005, the International Committee of Medical Journal Editors (ICMJE), a body comprising editors from some of the world's most influential journals, has refused to publish trials not entered on a trials register. Publication of the results of trials in these journals is an important step towards getting regulatory approval for new drugs and other products from the FDA. That said, few in the advocacy community, van der Zeijden included, believe that the drug companies will register all the trials they are planning  as they should under the WHO initiative  without the threat of some kind of sanctions.

"It helps that medical journals withhold results of anyone not registered, but that has more of an effect on academic players than pharmaceutical companies," says Kathy Redmond, Editor of Cancer World based in Milan, Italy.

This is a view echoed by Karen Carey Hazell, Consumer Representative from the Consumers' Health Forum in Australia, who believes that, over time, registration will have to be made compulsory. "Either that, or other regulatory and funding mechanisms will have to penalize manufacturers that do not register," she says.

Medical and public health editors argue that the ability to publish results on clinical trials and, in future, secure FDA approval, provides some incentive for companies and other institutions to register ongoing any trials they are planning. "A degree of enforcement has been achieved by the requirement from the International Committee of Medical Journal Editors (ICMJE) for trials to be registered at inception if the results are to be considered for publication," Fiona Godlee, Editor of the BMJ, wrote in a BMJ editorial in May.

WHO and its partners also hope that theirs is a formula for success. The WHO initiative aims to bring together participating registers of clinical trials around the world in one global network. This will provide a single point of access to the information stored in them and a web-based search platform where members of the public can obtain basic information about ongoing and completed clinical trials, including contact details for the study.

The goal is to increase transparency and accountability on the part of companies and institutions that do clinical research, and, in turn, boost public trust and confidence in that research. WHO experts say that even once the platform is up and running at the end of this year, it will be important to continue the discussion on how to improve the system.

"The debate on trials registration will no doubt continue for many years to come. But now is the time for progress and action while continuing to allow for robust debate and reasonable disgreements," said Dr Tikki Pang, Director of WHO's Research Policy and Cooperation department.

Whatever the difficulties involved in dragging the pharmaceutical companies to the registration table, few doubt the value of the exercise. Ironically, it is precisely the information drug companies are most sensitive about  the results of phase I and II trials  which patients facing regimen failures or resistance problems are most in need of.

"There are a huge number of novel targeted therapies in pre-clinical and early clinical trials," says Jan Geissler, vice president of the European Cancer Patient Coalition, and a cancer survivor himself. "Patients with resistant cancers often seek out these trials on the net as their last and only chance." Nor is this just a matter of blind desperation. Geissler cites a recent study showing that on average the response rate to phase I clinical trials in cancer patients is over 10%. "In my personal case," Geissler adds, "I joined a phase I/II trial after I was diagnosed with a cancer which, five years later, 98% of patients are surviving. The standard treatment offered at the time would have given me a 4060% chance of survival."

It's not everyone who can bounce back from a devastating diagnosis to go searching on the internet, and Geissler believes that such courage deserves better than it currently gets.

"The registers for ongoing clinical trials are frequently inaccurate, incomplete and out-of-date," he says. Meg Gaines, who once faced "salvage chemotherapy" as her only hope to survive ovarian cancer, and who now runs the Center for Patient Patnerships in Wisconsin, is similarly dismayed by the state of available registries. "It's very hard for people in these circumstances, dealing with the terror of a fatal diagnosis, to trawl through the different sites and struggle with the scientific jargon only to find that the trial that seems to offer hope is no longer active," she says.

The internet is very good at bringing people and goods, or people and services together. Deborah Collyar, a two-times breast cancer survivor, now president of Patient Advocates in Research, believes that web services such as EmergingMed.com, have a great deal to offer. "You can put your profile into the system and the search engine seeks to match you with trials currently going forward," she says. "It's very simple and very effective."

Such a system would certainly have helped the Italian man Kathy Redmond tells a story about. "He was a leukaemia patient who began to develop resistance to the drug Gleevec," she says. "The prognosis was bad so he went on line and surfed his way into Clinicaltrials.gov, the registry run by the US National Library of Medicine." It was there that he discovered that a trial looking at precisely the problem he was experiencing was taking place in Toronto.

"He got on the plane and flew to Canada. When he arrived in Toronto he was told by one of the research staff that an identical trial was going forward in his home town, Rome. Italy has no clinical trial register. The man had no way of knowing what was happening on his doorstep."

If WHO's plan to bring together the world's clinical trials registries works, that brave traveller's doorstep is about to get a little closer to home.