This year marks a decade since the first human outbreak of H5N1 avian influenza in Hong Kong. Since then, US $1.9 billion has been pledged to fight avian influenza and a global effort is under way to prevent and be prepared for a pandemic.

In May 1997 a three-year-old boy died of respiratory failure in a Hong Kong hospital. The cause was given as viral pneumonia of unknown etiology, but three months later the infection was identified as H5N1 avian influenza. While the virus had been detected in geese the previous year in China's Guangdong province and chickens in Hong Kong in March and May 1997, this was the first evidence that H5N1 had jumped the species barrier to threaten humans. Avian flu went on to kill six people and sicken 18 in Hong Kong until a comprehensive cull of the city's poultry in December that year.

Despite the cull, H5N1 started surfacing around the globe. The virus has infected wild birds and domestic flocks in at least 55 countries in Asia, the Middle East, Africa and Europe. As of 13 November 2006, there had been 258 confirmed cases of human infection killing 153 people.

Ten years later, there is greater awareness and understanding of the threat of a future global influenza pandemic, for which H5N1 is seen as the most likely trigger. A huge interdisciplinary effort is under way to prevent a pandemic and, at the same time, to be prepared for the worst. Despite this, much remains unknown about H5N1.

Experts in fields ranging from virology and public health policy to epidemiology, clinical medicine, and the laboratory and veterinary sciences have learned from the milestones of the last decade that will help deal with the threat in the future.

The 1997 Hong Kong outbreak was caused by an avian-to-avian reassortment of the virus and, whilst swift and comprehensive culling effectively wiped out that strain, the parent strain continued to reassort and cause subsequent outbreaks in geese and ducks. By the end of 2002 the virus had become lethal to ducks. "By that time we were getting quite concerned, because the virus was making very unusual changes in behaviour and was also affecting wild birds such as egrets," recalled Professor Malik Peiris, a microbiologist at the University of Hong Kong.

In early 2003, a mysterious outbreak of atypical pneumonia in Guangdong province was emerging, and by March of that year the outbreak of a new disease, severe acute respiratory syndrome (SARS), had become the focus for academic circles and the media, while having a huge economic impact on travel and other sectors throughout Asia. A cluster of H5N1 cases in a Hong Kong family who had travelled to China's Fujian province was another significant development, but concerns about avian flu were largely eclipsed by SARS.

With hindsight, the SARS outbreak was in itself an important milestone. Without heightened surveillance in January 2004 in Viet Nam, the avian flu outbreak there might have escaped detection. Similarly, SARS exposed weaknesses in China's disease surveillance and response systems.

"The ministry of health has taken on board the lessons of SARS," said Dr Julie Hall, WHO's coordinator of epidemic alert and response in China. "It was a pivotal moment in China's public health history, as during SARS there was a transparency issue and a huge information vacuum. A lot of that has since been resolved, also in terms of investment in infection control in hospitals."

Since early 2004, H5N1 human outbreaks have been reported in 10 countries and the death toll has risen every year, with South-East Asia suffering the greatest losses of life. Viet Nam and Thailand fared worst in 2004, with 46 cases and 32 deaths between them. By 2005, control measures in Thailand were having an effect, but the disease was emerging in Indonesia, which reported 19 cases and 12 deaths. By 2006, Viet Nam appeared to have reduced the number of human infections to zero, while 55 cases and 44 deaths were reported in Indonesia by mid-November.

Progress has been made in Indonesia on the animal health side, although this will remain a five-to-ten-year challenge, said Dr David Nabarro, senior UN system coordinator for avian and human influenza. The task ahead is long-term and must be tackled on several fronts: safer animal rearing practices, faster public health response to new human diseases, and more investment in early warning systems to handle all kinds of outbreaks.

"There's been a transformation, a recognition that sickness is an economic and political issue," said Nabarro. "And that's where WHO, with its focus on international health regulations and outbreak surveillance and response, comes in."

Surveillance and response present a major challenge, given several factors. H5N1 infection has non-specific early symptoms and is easily confused with other diseases. The clinical spectrum is broad: not all patients develop fever and symptoms in the lower respiratory tract and diagnostic testing is expensive and technically difficult. Even in countries with the most experience with H5N1, cases are still being misdiagnosed as dengue or typhoid fever. 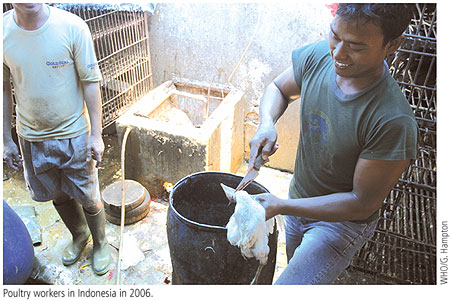 In some countries, safer animal rearing practices are catching on. In early 2006 after four H5N1 deaths, the Turkish government launched a public awareness campaign to encourage people to change livestock handling practices. Since then, there has not been a single case of human infection, despite the fact that H5N1 outbreaks in poultry continued.

There are wide variations within regions in terms of pandemic preparedness plans, but a lot of practical steps are being taken at national and regional levels, said Dr Keiji Fukuda, WHO's coordinator for the Global Influenza Programme within WHO's department of Epidemic and Pandemic Response.

"The challenge is to close the gaps within regions, and once plans are in place, to back them up with concrete capabilities such as better laboratory facilities and more trained staff," Fukuda said. In 2004, about 30 countries had pandemic influenza preparedness plans. Now 178 countries have published or are drafting plans, while at least 50 countries have undertaken exercises or joined regional simulation exercises to test these plans.

"Investing in pandemic preparedness is essentially like investing in an insurance policy," said Dr Margaret Chan, who will take up her post as WHO Director-General on 4 January. "And while we hope that we never have to make a claim, we also know that whatever investment we make now in strengthening global public health infrastructures will have benefits for our responses to all future infectious disease threats." Chan speaks from personal experience of battling both H5N1 and SARS as Hong Kong's director of public health and, since 2003, in her work at WHO.

Influenza vaccines are no magic bullet. Work on a pandemic vaccine continues in several countries, but the true efficacy of a vaccine would become apparent only when used. Supply is also an issue: clinical trials suggest that current vaccine production would be unable to provide enough doses for the global population in the event of a pandemic.

Also, H5N1 vaccine strains show a lower production yield than usual seasonal vaccine strains, explained Dr Marie-Paule Kieny, director of WHO's Initiative for Vaccine Research: "Moreover, H5N1 split or subunit-inactivated vaccines seem to be less immunogenic than their seasonal counterparts. Therefore, research efforts should be invested into understanding the basis for these differences, and into development of strains which do not have these two disadvantages".

Vaccine or no, the problem and solution are at the animal level. "If we can get a good handle on control in animals then the human threat disappears but there is still a long way to go towards achieving this, with many unanswered questions," said Peiris.

The most tantalizing question of all is whether an outbreak of pandemic avian flu could be stamped out at its source, as the 1997 Hong Kong H5N1 outbreak was. "It's never been attempted before and it's immensely complicated because the broadness of possibilities is so wide," said Fukuda. "The single most important lesson from the last decade is that emerging infectious disease threats such as this virus are tenacious and won't go away, and we need to be just as tenacious in response."