Organ transplants save thousands of lives each year, but put many live donors at risk due to an unregulated organ trade that exploits the vulnerable in developing countries and complicates legitimate organ donation efforts. Countries face a dilemma: how they can increase the supply of organs in a manner that is ethical and humane.

In rural Pakistan, Haleem Bibi had no choice but to support her family after her husband's hand was severed in a work accident. To make ends meet in February last year, the mother of seven sold one of her kidneys for about US$ 1500 to a clinic serving overseas clients, who pay up to US$ 40 000 for an organ transplant.

Months later, Bibi's family, who live in Jandala village in eastern Pakistan, remained mired in debt and her health worsened after receiving no post-operative care, a common feature of commercial organ harvesting. "The money has all been spent and now I have to work all day, which is very tiring," Bibi told the Bulletin in a recent interview.

Bibi's story is echoed by thousands more in Pakistan and other countries, where the neediest are often exploited by a thriving market for organs.

About 10% of the 63 000 kidney transplantations carried out annually worldwide involve payment of non-related donors of different nationalities, according to the World Health Organization (WHO). Globally, at least 200 000 people are on waiting lists for kidneys, and many more have no access to transplantation or dialysis services.

In industrialized and developing countries, kidney transplantation wherever possible is preferable to dialysis, which is physically taxing on patients and more costly than transplants. Every year, a million people develop end-stage renal disease, said Dr Luc Noël, coordinator of WHO's clinical procedures team, but only a fraction of those receive any kind of renal replacement therapy, and even fewer receive kidney transplants.

Different approaches are being taken to meet the demand for organs and halt transplant tourism, which is growing due to an increase in kidney disease and renal failure.

"There are two prevailing concepts of transplantation. One relies on money and leads to increased inequality, besides putting a price on the integrity of the body and human dignity. The second is based on solidarity and the donor's sole motivation to save a life," Noël said. "We should seek a common global approach to donation and transplantation characterized by respect for the donors, so that they are proud of what they have done."

Donating a kidney holds some risks for the living donor, even though kidney donation is a widely recognized procedure. Careful selection of donors is vital to avoid renal failure later in life. The nephrectomy  removal of a kidney  procedure has risks, such as haemorrhage, as well as delayed and chronic recurring pain. The risk that the donor could die due to surgery has been put at one in 3000.

Scientists are investigating alternatives to human-to-human transplantation, such as human cell and tissue engineering and the use of animal organs. Pre-clinical studies in which pig hearts and kidneys were transplanted into baboons show promise.

At the same time, more preventive medical care is needed to stop people from developing conditions, such as renal failure, that make them seek new organs in the first place. But none of these approaches is expected to satisfy the need for human organs for transplantation in the next five years.

In 1991, the World Health Assembly endorsed the WHO Guiding Principles forbidding organ sales, which state: "The human body and its parts cannot be the subject of commercial transactions. Accordingly, giving or receiving payment (including any other compensation or reward) for organs should be prohibited." The assembly, in 2004, further resolved to make countries accountable for transplant activities by calling on member states to protect the most vulnerable from transplant tourism and the sale of tissues and organs.

WHO advocates increasing the supply of kidneys from deceased patients, followed by those from living related donors in national, noncommercial and ethical programmes governed by legal frameworks.

Noël praised models such as Spain's national programme, which maximizes donations from deceased individuals by using professionals to identify potential donors in hospitals and discuss the concept with their relatives.

In addition, Noël said that altruistic donation from live donors is acceptable when it is ethical; that is, when donor-informed consent is obtained without coercion, donor safety is ensured and donors have access to medical follow-up.

Given the shortage of deceased-donated organs, there is a growing lobby in favour of increasing the number of living donors, including those who are not related to the transplant patient. Writing in the British Medical Journal in November 2006, Amy L Friedman, a transplant surgeon from the United States, argued that payment of live unrelated donors  which is forbidden under the WHO Guiding Principles and illegal in most countries  should be legalized to increase organ supplies and eliminate a black market in organs, thus making such procedures safer for all involved. 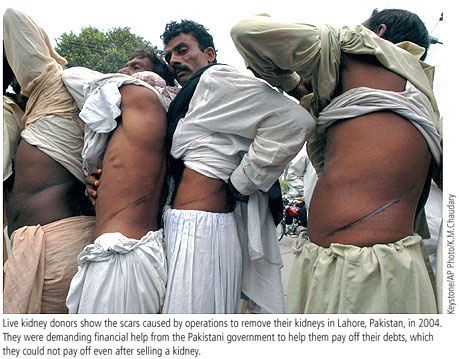 A law passed in Saudi Arabia in October envisages just this: that the government pays a monetary "reward" of 50 000 riyals (US$ 13 300) and other benefits, including life-time medical care for unrelated organ donors in a system regulated at the national level. The law's supporters said it would stop Saudi citizens from travelling to China, Egypt, Pakistan, the Philippines and other countries to receive organ transplants.

Noël argued, however, that such "rewards" were likely to attract the poorest segment of the Saudi population, such as migrant workers: "Involving money in the procurement of organs for transplantation, even if the word 'sale' is not used, confers a price on the organ and opens the way to brokers in the country and internationally."

Some 400 kidney transplants take place in Saudi Arabia annually, but about 600 Saudis still travel abroad to buy them in countries such as China, Egypt, India and Pakistan, according to Dr Faissal Shaheen, director-general of the Saudi Center for Organ Transplantation, speaking from the Saudi capital, Riyadh.

At a WHO meeting on 26 and 27 November 2006 in Kuwait, transplantation experts and representatives from Saudi Arabia and 13 other countries from WHO's Eastern Mediterranean Region pledged in the Kuwait Statement to oppose commercialism in organ donation.

After the meeting, Shaheen said the Saudi authorities were looking at how to regulate live unrelated organ donation without a commercial transaction. "We are thinking carefully how to make this new agreement purely altruistic, so this 50 000 riyals would be given as full medical insurance for the donor, plus compensation for days off work and other benefits like discount on airfares, priority in work applications, so the donors will not have cash but rewards." 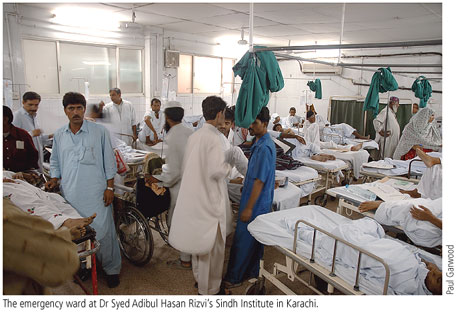 Noël said it was essential that donors should be respected by society for what they have done and not be stigmatized, unlike the situation in the Islamic Republic of Iran, where many paid live donors are ashamed and do not seek or receive follow-up medical care.

Few poor people in developing countries have access to transplants. In Pakistan, the Sindh Institute of Urology and Transplantation in Karachi is regarded internationally as a model for altruistic transplantation. Its founder and director, Dr Syed Adibul Hasan Rizvi, said his institute performs 130 to 140 free transplants annually between living relatives.

"Our motto is 'free with dignity'," said Rizvi, whose institute accounts for 20% of Pakistan's annual kidney transplants. He said the vast majority of the rest are performed by clinics run on a commercial basis.

"Pakistan has become a factory for regional transplant tourism," Rizvi said in an interview with the Bulletin. Recipients travel to Pakistan, where the temptation for money and greed is great."

Pakistan has no law regulating transplantation, but that may change soon. Draft legislation drawn up with Rizvi's help and based on WHO's guiding principles has been before parliament for 15 years. However, in early December 2006, the Pakistani newspaper Dawn reported that the enactment of the organ donation bill "was assured" and President Pervez Musharraf put his weight behind the law in a statement saying: " ... legislations will soon be in place to discourage illegal trade in human organs".

Rizvi said most Pakistanis who donate kidneys do so because they have few other options to make money and extricate themselves from "bonded labour", a system under which they are tied to property owned by landlords.

Prospective recipients from Australia, Europe, the Middle East and the United States who visit Pakistani clinics providing human organs pay up to US$ 40 000 for a kidney, he said. The donor receives a small fraction of that, about US$ 1000 to US$ 2000.

Experts like Dr Francis Delmonico said the world is gripped by a crisis when it comes to organ failure  particularly kidney  and that this has resulted in limited supplies of organs and exploitation of the poor through organ trafficking.

"We have a global epidemic of kidney failure evolving associated with some 180 million diabetic patients," said Delmonico, director of medical affairs for the Transplantation Society.

"The real solution is preventing people from having kidney failure with good medical care in the first place," said Delmonico, Harvard Medical School surgery professor and a member of the WHO Expert Advisory Panel on Transplantation.