Polio will soon be history 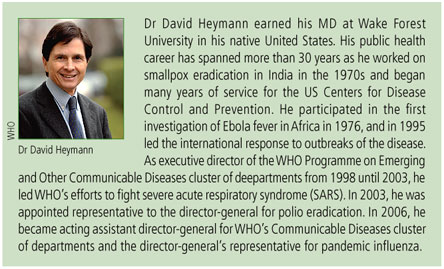 When the Global Polio Eradication Initiative was launched in 1988, there were more than 350 000 cases a year in more than 125 countries. In 2003, there were just 784 cases. This year will be critical for the initiative led by WHO, Rotary International, US Centers for Disease Control and Prevention and UNICEF. If vaccination campaigns can immunize all children in Afghanistan, India, Nigeria and Pakistan, where the disease remains endemic, polio will be history within a few years.

Q: The world is 99% of the way towards eradicating polio; when will we finish the job?

A: We have a new vaccine in use, a monovalent oral polio vaccine (OPV) which gives better protection for fewer doses of vaccine, and we have very high levels of commitment in all the countries that still have polio. If in the remaining four endemic countries all children can be immunized during polio campaigns, polio will be eradicated within the next two years.

A: The resurgence of cases in India, while disappointing, was not completely unexpected, because every four years there is an epidemic and the last one was in 2002. However, this epidemic is significantly smaller than the one four years ago, due to the use of monovalent OPV since May 2005. At that time, polio was present in the states of Bihar and Uttar Pradesh, and in Maharashtra state in Mumbai. The monovalent vaccine took out polio in Mumbai, and in Bihar strong progress continues. But in Uttar Pradesh, vaccination coverage started to decrease right when the monovalent vaccine was introduced. While coverage increased again this year, the decrease led to a build-up of susceptible children and now we're seeing the increase in cases.

Q: Isn't it possible to do a quick fix there?

A: There is never a single quick fix, but rather a range of activities that we are continuing to do in support of the government of India. For example, many state government medical officers' positions in Uttar Pradesh, are vacant so many of WHO's medical officers have been shifted there from other states to make sure eradication activities are being conducted.

Q: How can WHO see to it that the structures developed for the polio initiative are used to fight other diseases?

A: The infrastructure consists of over 3000 workers at country level. Those workers are detecting suspected polio cases, collecting specimens and sending them to the laboratory network where polio is identified. It is a very valuable network and has been used for other disease outbreaks many times at country level, for example in Angola in 2005 when the outbreak of Marburg fever occurred.

Q: Why was it easier to eradicate smallpox than polio?

A: Smallpox eradication was a much easier programme because every infection was clinically expressed in the same manner, so you could tell easily when someone had the disease. Also, once you found that a person had smallpox you could isolate them and vaccinate a ring of people around that person. With polio, for every clinically expressed paralysis there are at least 200 children infected asymptomatically, which means you can't find every polio infection.

Q: What are the risks after polio has been declared eradicated?

Q: Could polio virus be used as a bioweapon after it has been eradicated?

A: Any organism can be used as a bioweapon. It just depends on what a bioterrorist is trying to accomplish. If a polio virus is introduced somewhere and children become paralysed, there will be great concern. Having said that, due to its characteristics, the polio virus would probably not make a particularly effective bioweapon. 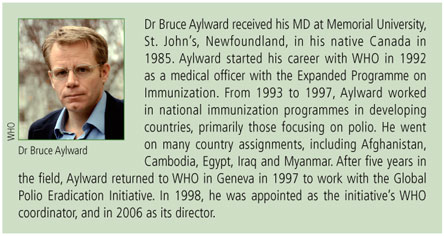 Q: What is WHO headquarters' role in global polio eradication?

A: This has evolved over the past 20 years. Most significantly, 10 years ago we took a hard look at our and our partners' roles, and restructured our activities in Geneva to focus on areas where we could be of greatest help to the regions and countries. We markedly scaled-up strategic planning, cross-agency and cross-regional coordination, communications, advocacy, resource mobilization, and research and product development activities. We also ranked each country in the world as high, medium or low priority, in terms of where Geneva could add value to regional and country efforts. The changes are dramatic: 10 years ago, the polio programme was "one of the best-kept secrets in health", only six people in WHO Geneva worked full-time on polio, there were virtually no funds and no fund-raising mechanism. Today, we have about 50 staff here in Geneva and more than 3200 in regional and country offices.

Q: What will happen to this group working on polio at WHO when the disease is eradicated?

A: At the end of polio, our goal will be to ensure that it stays eradicated. That means ensuring containment and safe handling of polio viruses in laboratories and vaccine manufacturing sites and continuing to conduct surveillance for polio in case the virus is re-introduced or re-emerges. Secondly  where we could really see another big payoff from polio eradication  we must mainstream the polio infrastructure so that it can tackle other diseases and continue to strengthen health systems at country level. Countries have mobilized a network of 20 million volunteers and health workers to implement the polio eradication strategies. These are the people who deliver the vaccine to children, and this workforce must be used to deliver other basic health services, such as bednets to prevent malaria, for example. By mainstreaming the polio infrastructure, it can continue to benefit health systems long after the polio virus has been eradicated.

Q: When is polio eradication likely to be official?

A: With the new polio vaccines and new diagnostic procedures that are now available, the last four polio-endemic countries should be able to interrupt their last chains of polio virus transmission in the coming 24 months. Once we have seen the last case of polio, however, it will still take a further full three years of surveillance to be able to certify all WHO regions as polio-free. Only at that point can we then take the final step and begin the process of stopping routine immunization with the oral polio virus vaccine, and thereby eliminate all paralysis due to polio viruses.

Q: Has that missed 2000 deadline to eradicate polio been a setback?

A: Although the global eradication goal was set in 1988, it wasn't until 1996 that the eradication strategies were even introduced in many countries. So it was always going to be a tremendous challenge to meet the 2000 goal. In the mid-1990s, 40 to 50 countries were still polio-infected and many of those had not started trying to eradicate the disease. Consequently, by the late 1990s, our real goal for the year 2000 was to ensure that every country had at least started on polio eradication, and created the global momentum needed to finish the job. Today only four parts of four countries remain endemic for polio, the lowest number in history. Three WHO regions are already certified polio-free. So really, the 2000 target was essential to get all countries fully engaged in the eradication programme, and the enthusiastic continuation of the programme beyond that date reaffirms the international commitment to achieving this global public good.