Reducing the impact of climate change

The most recent report of the Intergovernmental Panel on Climate Change (IPCC) found that there is overwhelming evidence that humans are affecting climate and it highlighted the implications for human health. The World Health Organization (WHO) is helping countries respond to this challenge, primarily by encouraging them to build and reinforce public health systems as the first line of defence against climate-related health risks.

There is mounting scientific evidence that climate change threatens the health of millions of people, but many governments are only just starting to act. WHOs new strategy is to provide them with evidence and advise them on the best course of protective action.

For WHO, the shift to working in this way has been rapid: 12 months ago, save for a few workshops in developing countries, its environment-related activities were mainly based on publishing. But this refocusing of priorities echoes a change of opinion among Member States that can be traced in part to the severe heatwaves that engulfed Europe in 2003.

"When the heatwaves came, there were thousands of additional deaths in countries with some of the best health systems in the world," recalls Diarmid Campbell-Lendrum, a senior scientist in the department of Public Health and Environment at WHO. "It was a dramatic reminder that we are vulnerable and we need to think about how to manage these risks."

This shocking experience spurred Europe to take action. But outside Europe, making the link between climate and health has been harder because of the difficulty of demonstrating that climate is responsible for specific health risks and of describing the wide range of possible outcomes. Often-cited consequences of changing temperatures include droughts, floods, alterations in the burden of vector-borne and water-related disease, and increases in freak weather events or natural disasters that can affect health through injury, malnutrition or impoverishment.

But there are a number of indirect health effects that are difficult to quantify because, explains Campbell-Lendrum, "we cant say that climate change is the only cause of an event, only that it increases the likelihood of those changes occurring." The difficulty of defining a causal relationship makes health-sector planning for environmental change a challenge.

There is, however, consensus on which countries are most likely to feel the effects of climate change the soonest. Small island states, being characteristically low-lying and geographically isolated, are most clearly at risk of adverse effects, says Campbell-Lendrum. But capacity for preparedness also depends on a countrys resources and its public health system. And for countries that combine all of these risk factors  much of Bangladesh, for instance, and many African countries  without appropriate preventive action, the future looks bleak. 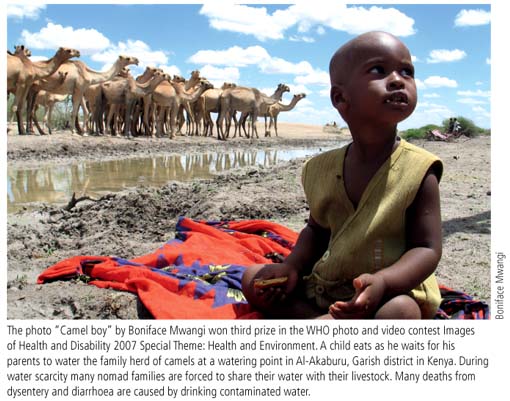 The main message WHO has tried to get across to these vulnerable places is the importance of building and reinforcing public health infrastructure, implementing an epidemiological surveillance system and increasing capacity to respond to vector-borne disease. However, since the Geneva-based WHO climate change team started doing workshops with countries in 2000, they have found that some of the member states worries differ from the headquarters teams predictions. "It is only when you work directly with practitioners on the ground that you get the real identification of problems," explains Campbell-Lendrum.

A pilot project this year in seven countries to test ways to combat climate changes health effects has shown interesting results. Barbados, Bhutan, China, Fiji, Jordan, Kenya and Uzbekistan were involved in the scheme supported by WHO and the United Nations Environment Programme. According to Campbell-Lendrum, the main worry WHO had expected to encounter was a rise in sea levels. But countries were more concerned about water stress, either floods or droughts. That thinking makes sense when you look at the public health context, says Campbell-Lendrum, because these countries already have problems supplying water to outlying areas, and they have a high burden of disease sensitive to water supply, such as diarrhoeal disorders. "But these are not the things we would have picked up on from Geneva," he says.

Another surprise came from arid Jordan. "We had expected them to tell us that they would have problems supplying clean water to households," Campbell-Lendrum explains. "In fact, they think they can guarantee these supplies. Their main concern is that actions to address climate change in other sectors, such as scaling up the use of wastewater in agriculture, would bring new health risks, such as chemical and biological contamination of food."

How can WHO help vulnerable countries? It can provide technical support for improving basic public health services, making best use of water supplies and ensuring water safety. These activities have been part of WHOs climate change strategy for a while, but WHO is planning more. Dr Maria Neira, director of the Public Health and Environment department, says that WHO will release a Global Framework on Protecting Health from Climate Change at the United Nations Framework Convention on Climate Change conference in Bali, Indonesia, in December.

This document, which is currently undergoing peer review, will contain numerous recommendations for countries, policy-makers, the private sector and even the general public on what can be done to reduce environmental damage and improve health. But the key tenet of the document, and the current focus of WHOs advocacy, will be using the health argument to push for policies that promote public health while reducing greenhouse gas emissions. According to Neira, this document bolsters the economic case for action on climate change now rather than later.

Neira argues that preparing for the health effects of climate change is not just about preparing for the likely increase in case loads or changes in the burden of disease. It is about making governments aware that health departments need to talk to their colleagues in other areas of government to convince them that health needs to be part of different agendas, including planning, transport and trade. "The health sector needs to be empowered to be part of decision-making" in those areas, she says.

Thanks to effective campaigning and support from WHO Director-General Dr Margaret Chan  who earlier this year said climate change "may turn out to be the most ominous struggle" facing health in coming years  there is already high-level support for this strategy. Chan has since made protecting health against the effects of climate change next years theme for World Health Day (7 April 2008) and WHOs 60th anniversary celebrations. Spanish Prime Minister José Luis Rodríguez Zapatero stated his support for the WHO strategy at the UN Climate Change Summit in New York in September and pledged 3 million euros (US$ 4.227 million) for its implementation. "Countries are more and more realizing that health can be a driving force for this climate change agenda, and there will be negative effect on health for not taking action now," says Neira.

Given the scale of the changes needed to combat climate change, optimism is often in short supply. However, both Neira and Campbell-Lendrum say there is an important opportunity to convince emerging powers like China and India that implementing policies now to reduce greenhouse gas emissions can have benefits that are immediate and local, as well as long-term and global.

"There are many reasons that people will advance not to do it. But if we make these changes, there are potentially very large benefits," says Campbell-Lendrum. "The message is: if you cut greenhouse gas emissions, it is not all pain and no gain."