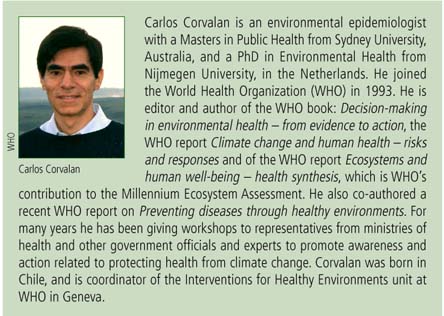 Protecting health against the effects of climate change will be next years theme for World Health Day (7 April 2008) and WHOs 60th anniversary celebrations. Carlos Corvalan talks about WHOs work with countries to help them tackle those effects and how climate change affects peoples health.

Q: Are there any effective initiatives that have helped countries adapt to the negative impact of climate change on peoples health?

A: Many. We have been working with countries to assist in the identification of vulnerabilities and of adaptation options for climate change. For example, WHO helps countries set up early warning systems for heatwaves, to be informed and prepared for vector-borne diseases in areas where increases are expected from warming, or the safe use of wastewater in water-scarce areas. But this is only the tip of the iceberg of what needs to be done. We must deal with climate change from the point of view of health security, and address water security, food security and energy security among others.

Q: There has been a very lively public debate about climate change yet health is rarely mentioned. Has WHO been slow to get involved?

A: WHO has been quite proactive in this area but in spite of this, the health argument has not been used to its full extent when discussing global action, such as in the conferences of the United Nations Framework Convention on Climate Change (UNFCCC). Many of the global climate change key players have not known enough about what WHO is doing. Up to very recently, WHO has not been sitting at the key tables, with the appropriate level of representation. All this is changing very fast, and you can now see WHO taking a key leadership role on climate change globally. Climate change is on the health agenda of Director-General Dr Margaret Chan, and this will have an enormous positive impact on protecting peoples health.

Q: Will we ever completely understand how climate change affects peoples health?

A: There are many unknowns, but we know enough to take action to protect health. Lets consider the simplest case, heatwaves. They kill people, and more such extreme events are expected as a result of climate change. After the heatwave in Europe in 2003, which killed tens of thousands of people, early warning systems are being set up, and lives are being saved. So action is possible. Early warning mechanisms are also being put in place to warn of the increasing risk of hurricanes in the Caribbean and glacier lake outburst floods  a consequence of melting glaciers due to warming. We also know that malaria and other vector-borne diseases are highly sensitive to climatic conditions, and that warming shifts the distribution of vectors. Diarrhoeal diseases increase with rising temperature among the least developed countries. Perhaps one of the greatest concerns is the impact of climate change on the land, leading to changes in production of food, in particular for subsistence farmers. Increasing temperatures and changes in water availability could be disastrous to the livelihoods of millions of people, with clear implications for health. The same can be said about the millions who depend on mountain water for drinking and irrigation, from the seasonal melting of snow and glaciers. So although we do not have a complete evidence base the current evidence cannot be ignored, and neither should the projections and models which are a clear warning, and a call to action now.

Q: Is there concern about how climate change affects animal health and the repercussions for human health?

A: Certainly. For example, we know that many countries, particularly in Africa, are very concerned about the effect of climate change, and particularly droughts, on livestock. If it becomes impossible for livestock to graze, then you take away the economic support and the whole way of life for some populations, which in turn impacts on their health. More research is needed in the area of animal health and its repercussions for humans, and the role of other factors besides climate, such as changes in land use, water stress, and human alteration of ecosystems. But the potential for major health impacts from animal health remains large. There has been some debate about whether there is a connection between climate change and avian influenza. No links have been established, although it is known that climate change could alter the timing and geographical pattern of bird reproduction and migration. We do not understand the impacts of small ecological changes sufficiently to either accept or reject the possibility that birds or other animals could spread new emerging diseases to other animals and potentially also to humans. The construction of scenarios in cases like this  to separate what is plausible from possible or likely  is a useful way to analyse levels of risk versus levels of impact and to look for intervention options in each case.

Q: How reliable are the available data on the effect of climate change on health?

A: Economic interests can be the hidden variables in the pursuit of evidence and can delay action. How reliable were the data on smoking and lung cancer in the 1950s? What about the evidence on stratospheric ozone depletion in the 1970s? With smoking we had a huge industry trying to convince the public that there was no risk to health. With the increase in ultraviolet radiation from stratospheric ozone depletion, actions by governments and industry to remove ozone-depleting substances from products came at a price. For the health sector, and for individuals, protection was less expensive: avoid the sun, wear a hat, use sun screen. Countries took action to reduce and eliminate ozone-depleting substances and the health sector took action to protect public health. Given what we know today about climate change and its likely consequences on ecosystems and on human well-being, globally we should be taking much stronger action. Yes, we need more data, more studies, but current data are reliable enough to make us very concerned and we should act before matters get worse.

Q: How many people in the world are suffering from adverse health effects of climate change?

A: A few years ago, as part of WHOs Comparative Risk Assessment study, we estimated the health impacts of climate change, in terms of mortality and healthy life years lost, based on data for the year 2000. The study was very selective in terms of the diseases we included, and was, in our view, a large underestimate. In all, just over 150 000 deaths globally in that year were attributed to the observed increases in temperature by 2000. In terms of healthy life years lost, it was on a par with outdoor air pollution, which is a well-studied risk factor. The most severe impacts (overall, not just on health) were expected to occur in vulnerable populations, among the poor, and particularly in Africa. The WHO study clearly showed that the impacts investigated occurred predominantly among young children in Africa.

Q: Did the Intergovernmental Panel on Climate Change (IPCC) reports give adequate attention to the ill effects on peoples health caused by climate change?

A: The IPCC brings together hundreds of the best scientists and WHO has contributed and participated in its work since 1993. Its strength is in climate science, distilling information and accumulated knowledge from the best institutions globally, and carefully assessing an increasing number of studies and a detailed understanding of the uncertainties. Its most recent report states that the warming of the climate system is unequivocal. "Health" is given the space of one chapter among 40 or more in the three main IPCC volumes released this year. So while one can say that IPCC does give adequate attention to health, it provides a compact summary of current knowledge. What we know today is not much more than what we learned in previous IPCC reports, or even in the first WHO report in 1990: Potential health effects of climate change. But we are making great progress in the amount of evidence available, which will improve confidence in the statements made. The IPCC provides probability estimates as "confidence levels" for decision-makers. So, for example, the health chapter states with "very high confidence" that the health effects of climate change will increase in all countries and regions; and it concludes with "high confidence" that there will be an increase in malnutrition and in the number of people affected by climate related events. So, from a public health perspective the IPCC reports constitute a comprehensive assessment of the most recent literature and are a very valuable synthesis of the latest evidence available.

Q: Governments are increasingly expressing concern about climate change and its effect on health. Is this just rhetoric or are governments starting to act?

A: WHO has been addressing this topic since the late 1980s and we have observed a slow but increasing level of concern in the health sector in various countries. This seems to have exploded in the last couple of years. I think the Al Gore film, An Inconvenient Truth, impressed a lot of people, and caused increased public demand for information and action. The Stern review report on the economics of climate change made clear that although action to stabilize the climate would be costly, inaction would be significantly more expensive. And now the Nobel Peace Prize. People are looking at what action they can take, as individuals or as members of a community or organization to reduce their impact on the environment. When it comes to governments we need to see their concern matched with resources, by investing in cleaner technologies, for example, and by investing in interventions where changes are inevitable. Action is falling very short of what is truly needed, and this applies to the health sector as well.

Q: What is WHO itself doing to mitigate the negative impact of climate change on health?

A: WHO, like many international organizations, produces lots of greenhouse gases. If you think of travel alone, each of us is far from being climate neutral. A return trip from Europe to Asia already puts us well over of what is acceptable as a low carbon emission quota for one person for a whole year. So there is already a lot that WHO staff could achieve just by reducing air travel. But we can do more. We can also make clear to individuals, to communities and to countries that many of the actions that are necessary to cut greenhouse gas emissions can also be good for your health. For example, shifting to cleaner energy sources, or to more sustainable urban planning and transport systems, cuts carbon dioxide emissions which in addition to reducing the impact on climate would also help reduce the 800 000 deaths per year from air pollution, the 1.9 million deaths per year from physical inactivity and the 1.2 million deaths per year from road traffic accidents. We can fight climate change and get healthier in the process.