What will become of the polio network?

Polio could be history within a few years, but what will become of the vast network set up to fight the disease is unclear. Health experts fear that once polio is eradicated, donors will stop funding the diversified network, which now helps immunize children against many other diseases, fight outbreaks and respond to natural disasters.

When a massive earthquake ravaged northern Pakistan in October 2005, the initial aid provided to survivors in many areas came from highly trained World Health Organization (WHO) polio medical officers.

In many African countries, it is these same polio officers who lead vaccination drives to crush other diseases, including hepatitis B and measles, and who detect outbreaks, like Marburg fever in Angola in 2004.

While fighting to end poliomyelitis, thousands of polio medical officers have adapted their skills and duties to become vital cogs in national health networks.

But leading WHO officials fear that donors will stop funding the massive global network altogether after polio's eradication, resulting in the loss of a vital resource that is now crucial to immunization campaigns and outbreak responses in many countries.

"Our teams not only helped in the earthquake zone, but they also helped to develop guidelines for avian flu surveillance and now routinely collect data on measles and neonatal tetanus within their acute flaccid paralysis (AFP) work," Dr Nima Abid, WHO's polio team leader in Pakistan, told the Bulletin.

WHO's diverse anti-polio approach, made possible by an annual US$ 100 million in funding under the Global Polio Eradication Initiative, has brought the disease to the brink of eradication.

At the same time, it has helped to boost health services in many developing countries, reducing mortality and morbidity levels for measles, malaria and vitamin A deficiency in the process.

Some 3300 AFP surveillance and response staff operate in 54 countries, along with thousands more polio communication and social mobilization workers.

"This is not a group that just detects diseases but it also responds, does local planning and mapping, gives vaccines to children and develops response mechanisms," said Dr David Heymann, assistant director-general for WHO's Communicable Diseases cluster of departments. "With influenza, the polio officers could do much the same."

"But our fear is that as soon as the last case of polio occurs, it is going to be hard to maintain the funding to even continue the surveillance necessary to certify eradication."

Polio remains endemic in Afghanistan, India, Nigeria and Pakistan, and there is a good chance that the virus can be eradicated in those countries within two years. Final certification and verification of the disease's demise is possible by 2013, said Dr Bruce Aylward, the director of the Global Polio Eradication Initiative at WHO.

Governments, in conjunction with WHO and in line with the International Health Regulations 2005 (IHR), should use the "slack" provided by these next few years to permanently integrate as much of the polio network as possible into existing public health systems, Aylward said.

Public health experts such as Heymann and Aylward agree that allowing the polio network to collapse would be akin to the tragedy of scrapping the smallpox surveillance system after the last case of the disease was reported in 1977 in Somalia.

"We must make sure we don't repeat the same errors when polio ends. It is a matter of finding the resources," Aylward said. 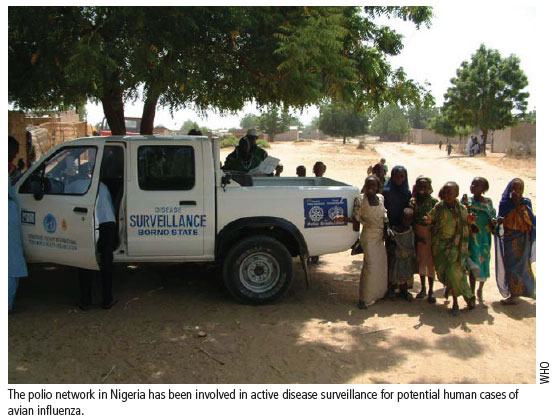 The global polio network has become an integral component of national and regional health systems. Not only do its surveillance officers vaccinate against polio, but through the public-private GAVI Alliance  formerly known as the Global Alliance for Vaccines and Immunisation  they have also been able to rapidly introduce new and underutilized vaccines around the world, including for hepatitis B and Haemophilus Influenza type b (Hib).

Polio field workers have also led the march in reporting and responding to other priority diseases, including measles and rubella. The efforts of polio surveillance officers have helped countries move closer to achieving Millennium Development Goal 4; by reducing measles mortality, the lives of more than 500 000 children are saved every year.

While immunizing children against polio, measles and other diseases, polio surveillance officers have also been distributing vitamin A supplements, particularly in sub-Saharan Africa and Asia, helping to avert more than 1.5 million childhood deaths to date. Polio officers have also led drives to hand out insecticide-treated bed nets across malaria-ravaged countries in sub-Saharan Africa.

WHO country and regional offices helped to prepare applications for many of the more than 70 countries that needed support for vaccines and financial aid from the GAVI Alliance after its launch in 2000.

"This couldn't have been done without the technical presence from polio programme staff, because the most prepared staff at regional and country level cognisant of immunization activities were the AFP surveillance staff," said GAVI's deputy executive secretary, Michel Zaffran.

Zaffran said maintaining as much as possible of the polio system after eradication would be "very helpful" for GAVI, as it works to increase vaccination coverage across many health resource-starved countries, particularly in Africa.

"It would be a pity if this human resource was lost, because certainly the technical assistance they provide is badly needed in many countries," he told the Bulletin.

Such a resource could help many countries comply with legally binding revised health rules. The International Health Regulations (IHR), adopted by the World Health Assembly in 2005 and set to come into force in June 2007, call on signatories to develop, strengthen and maintain surveillance and response capacities. The aim is to detect, assess, notify and report public health events to WHO, and respond to risks and emergencies. 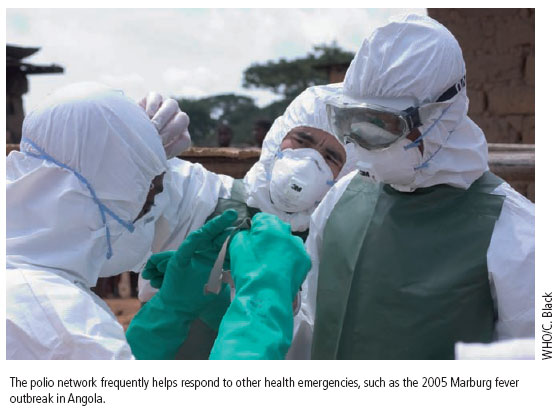 Utilizing the polio surveillance staff and infrastructure would help governments develop such capacities and safeguard their own national security, said Dr Guénaël Rodier, director of the IHR Coordination Programme at WHO.

But funding remains the core problem, Rodier acknowledged. WHO's polio eradication campaign has received more money than any other WHO programme and has benefited greatly from many donors, including US Centers for Disease Control and Prevention and Rotary International.

In turn, the campaign produced arguably WHO's largest and best prepared disease immunization and response system, deploying medical officers to scores of countries and equipping them with vehicles and communications equipment.

"Now we have a polio system that is not yet dead, but we also have the challenge that it may die," Rodier said. "If we don't identify resources to support most of the polio infrastructure, it will be difficult to absorb them.

"And the next time we have a new SARS (severe acute respiratory syndrome) or influenza pandemic, all these people will be missing."

Once polio has been eradicated, WHO will still maintain a focus on the disease.

Members of WHO's Alert and Response Operations team, which identifies and responds to events of international public health importance, have been brushing up on their knowledge of polio.

But it remains to be seen whether the team would be given the role of taking on future polio responsibilities, said its coordinator, Dr Thomas Grein.

Grein said polio surveillance officers are highly trained and already respond to many of the diseases his team responds to.

"The polio people we have seen in the field do not require a fundamentally different skill set. Polio people have to be on the lookout for initial events, unexpected events, haemorrhagic disease, fever diseases and unknown diseases," Grein said.

"It would be a public health catastrophe if this entire network would be scrapped and a few years later we realized we need its health officers to treat people in areas where we previously had them."

SciELO Analytics
Dimensions
What will become of the polio network?
PlumX