Recent news from WHO 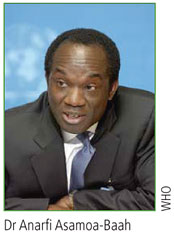  WHO and the United Nations Population Fund welcomed two new vaccines for human papillomavirus (HPV), the virus that causes most cervical cancer, as a major opportunity for the developing world on 12 December.

 Dr Margaret Chan took office as Director-General of WHO on 4 January. On 9 January, Chan named Dr Anarfi Asamoa-Baah (see picture) as her new deputy director-general. Asamoa-Baah took up his duties immediately. He has held senior positions at WHO since 1998. He has been widely respected for his leadership in HIV, tuberculosis and malaria, as well as communicable diseases, health technology and pharmaceuticals, and in external relations. Prior to joining WHO, he was the director of medical services in his native Ghana.

 WHO said on 9 January it was drawing up a five-year plan to improve access to treatment for the victims of rabies and snake-bites. Close to five million snake-bites and scorpion stings are reported each year, mostly in Africa, Asia and Latin America.

 WHO reported on 16 January progress made by an electronic record-keeping system in western Kenya that has revolutionized HIV care with timely medical tests and treatment. The programme, which serves 70 000 patients, was developed through a partnership between Moi University in Eldoret and Indiana University in the United States, with assistance from WHO.

 Measles deaths have fallen sharply since 1999, from an estimated 873 000 in 1999 to 345 000 in 2005, according to the Measles Initiative partners. This group, comprising the American Red Cross, the United States Centers for Disease Control and Prevention, the United Nations Foundation, UNICEF and the WHO, said on 18 January that this 60% decrease means that the partnership has surpassed the United Nations goal to halve measles deaths between 1999 and 2005.

 WHO published its first report with global and country data on progress being made by Member States on the use of information and communications technologies to improve public health. Building Foundations for eHealth was released on 23 January. The web version is available at: http://www.who.int/goe/

For more about these and other WHO news items, please see: http://www.who.int/mediacentre/news/releases/2007/en/index.html