India's medical tourism sector is a growing source of foreign exchange as well as prestige and goodwill outside the country. Having supported medical tourism's rapid growth, the government is under pressure to find ways to make the sector of benefit to public health services that are used by most of India's 1.1 billion population.

Indian consulates and missions abroad face a growing number of inquiries about "M" or medical visas.

The Indian Ministry of Tourism's 13 overseas offices are stocked with information for those intending to travel to India for medical treatment. The new M-visas are valid for a year and are issued for companions too.

Howard Staab, a 53-year-old from the United States, is one such tourist. His smiling face figures in the glossy brochure on medical tourism produced as part of Incredible India, the government's big-budget marketing campaign to attract tourists.

India's efforts to promote medical tourism took off in late 2002, when the Confederation of Indian Industry (CII) produced a study on the country's medical tourism sector, in collaboration with international management consultants, McKinsey & Company, which outlined immense potential for the sector.

The following year, then finance minister Jaswant Singh called for the country to become a "global health destination" and urged measures, such as improvements in airport infrastructure, to smooth the arrival and departure of medical tourists.

Medical tourism is an example of how India is profiting from globalization and outsourcing. It is also a new form of consumer diplomacy, whereby foreigners who receive medical services in India help the country to promote itself as a business and tourism destination.

India hosts medical tourists from industrialized countries, such as the United Kingdom and the United States, but also from its neighbours Bangladesh, China and Pakistan. It faces intense regional competition in this sector, particularly from Malaysia, Singapore and Thailand.

A wide-range of services are on offer. Ministry of tourism brochures advertise cardiac surgery, minimally invasive surgery, oncology services, orthopaedics and joint replacement, and holistic health care, provided by about 45 hospitals promoted as "centres of excellence".

Health tourism is often hailed as a sector where developing countries, such as India, have huge potential due to their comparative advantage based on providing world-class treatment at low prices combined with attractive resorts for convalescence.

The CII estimates that 150 000 medical tourists came to India in 2005, based on feedback from the organization's member hospitals. Figures for M-visa entrants are not readily available. CII spokesperson Aditya Bahadur told the Bulletin that patients prefer to come on ordinary tourist visas to avoid the M-visa's requirement that they register with the regional authorities within two weeks of arrival.

A ministry of tourism brochure predicts a "phenomenal expansion" of the Indian health-care industry. According to the Federation of Indian Chambers of Commerce and Industry, the health-care market, which includes health insurance, is expected to expand by 2012 from US$ 22.2 billion, or 5.2% of gross domestic product (GDP), to between US$ 50 billion and US$ 69 billion, or 6.2% and 8.5% of GDP.

While impressive, these figures do not address the divide between facilities oriented towards medical tourism and those that cater to the health needs of the average, usually rural, Indian.

Fewer than 50% of India's primary health centres have a labour room or a laboratory, while fewer than one in five have a telephone connection, according to the 2005 Reproductive and Child Health Facility Survey. Moreover, fewer than one in three primary health-care centres stocked essential drugs, in contrast to the situation in many new urban medical centres. 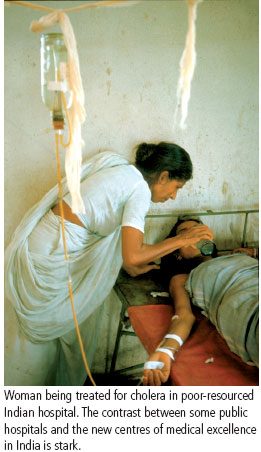 Health care in India's rural districts is poor, dogged by shortages of trained health workers, a lack of funds and corruption. Many patients resort to quacks or seek no medical care at all, since private practitioners are beyond the means of most.

In contrast, to provide a guarantee of service quality for medical tourists, the Indian Ministry of Health has begun accrediting hospitals and recommending prices for services. So far 35 hospitals have applied for accreditation.

CII has a certification system and has already approved 30 of its 120 hospital members. Under the CII system, certified hospitals must agree to limit charges to foreigners as part of a dual pricing-system that offers domestic patients lower prices. Non-resident Indian medical tourists are charged the same as any others from abroad.

Still, even these lower prices are too high for the vast majority of India's 1.1 billion population. The CII group, which also has an ethical code for member hospitals, is establishing a regulatory framework for its own members, raising questions about how effective such self-imposed rules can be.

CII lawyers are also drawing up a standard contract to ensure that any litigation, arising from treatment, is dealt with in Indian courts. Currently, neither medical tourists nor Indian patients can take their cases to Indian courts. Their only recourse is India's State and National Consumer Disputes Redressal Commissions, which have a huge backlog.

"Any litigation launched against an Indian hospital will expose the poor system of justice that exists here," said Dr Mohan Thomas, medical director of the Cosmetic Surgery Institute in Mumbai and Chairman of CII's Healthcare Committee.

But while helping to strengthen medical tourism, the Indian government is coming under increasing pressure to use these foreign exchange revenues to benefit the ailing and under-resourced public health system.

The private sector hospitals argue that trickle-down payments for hotels and other services will improve the economy as a whole. But public health advocates say that, unless the Indian government actually allocates more of its revenues to public health systems, the impact will be negligible.

"The government has not examined how our patients will benefit [from medical tourism] or whether they will lose out," Dr Nilima Kshirsagar, dean of one of Mumbai's largest public hospitals, the King Edward Memorial, told the Bulletin. "The need to benefit Indian patients is the main goal, and medical tourism cannot be at their cost."

Prime Minister Manmohan Singh recently acknowledged the need improve public health care: "There are many parts of our country where public-sector intervention in health is absolutely essential to carry conviction with our people and to improve the quality of delivery of services."

There are fears, however, that medical tourism could worsen the internal brain drain and lure professionals from the public sector and rural areas to take jobs in urban centres.

"Although there are no ready figures that can be cited from studies, initial observations suggest that medical tourism dampens external migration but worsens internal migration," said Dr Manuel Dayrit, director of WHO's Human Resources for Health department.

"It remains to be seen how significant these effects are going to be. But in either case, it does not augur well for the health care of patients who depend largely on the public sector for their services as the end result does not contribute to the retention of well-qualified professionals in the public sector services," Dayrit said.

Dayrit disagreed with medical tourism proponents, who argue that some revenues from medical tourism will find their way into public coffers to help retain staff in the public sector. "Unless national laws or regulations are set up so that these revenues are taxed explicitly and channelled to the public sector to augment salaries, the likelihood of this happening is very slim," he said.