Technology holds the key to many of the challenges presented by a particularly virulent form of tuberculosis that broke out in South Africa last year. Countries across the region are making progress in keeping the threat at bay, but not fast enough.

A pilot study to evaluate the tests in 40 000 tuberculosis patients started on 1 April in five South African provinces and is expected to last for 12 months.

"This is an important breakthrough, as it cuts the time for a definite diagnosis of MDR-TB," said Dr Karin Weyer, tuberculosis research director at the South African Medical Research Council.

Treating patients earlier will save lives, reduce the time spent on inappropriate and ineffective treatment, and reduce the spread of MDR-TB within crowded hospitals and clinics. Perhaps most importantly, it will be possible to diagnose patients with extensively drug-resistant tuberculosis (XDR-TB) at a much earlier stage.

In recent years, doctors had seen isolated cases that were highly resistant to drugs. But in March 2006, the World Health Organization (WHO) and the United States Centers for Disease Control and Prevention first reported XDR-TB as a serious emerging threat to public health and TB control.

XDR is defined as tuberculosis that is resistant to the two most important antitubercular drugs, rifampicin and isoniazid, as well as to any fluoroquinolone and at least one of three second-line injectable drugs: kanamycin, amikacin and capreomycin.

Since September 2006, about 183 people, most of whom were HIV positive, have died from XDR-TB in South Africa. XDR-TB could exacerbate the HIV/AIDS epidemic in South Africa, where about five million out of a population of 45 million people are HIV positive and as many as 1000 people die of AIDS-related complications every day.

Although the 2007 WHO report, Global tuberculosis control: surveillance, planning, financing, announced the good news that tuberculosis prevalence and death rates have been falling globally, the case load continues to grow in WHOs African, Eastern Mediterranean and South-East Asian Regions (www.who.int/tb/xdr/globaltaskforce_update_feb07). And while HIV testing for tuberculosis patients is increasing fast in the African Region, little effort has been made to screen HIV-infected people for tuberculosis even though this is a good method for case finding.

The Foundation for Innovative New Diagnostics (FIND), a non-profit organization based in Geneva, is behind the new rapid tests. Weyer said an interim analysis would be carried out six months into the 12-months pilot study. If the results are positive, Weyer said she hoped the Department of Health would roll-out the tests to the remaining provinces. 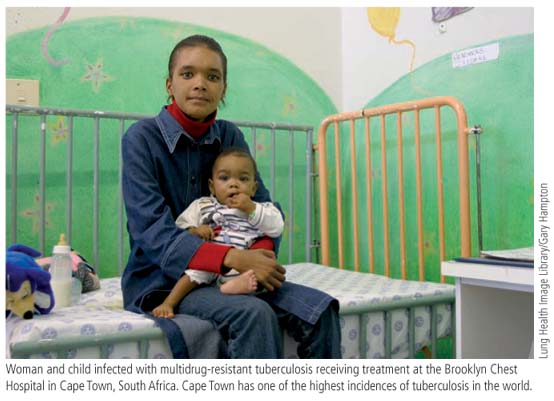 Improved diagnosis was one of the priorities identified by the WHO Global XDR-TB Task Force last October. Following this, eight countries in southern Africa drew up a regional strategy to manage and prevent XDR-TB. Since then, each has delivered individual action plans to WHO and, in February, WHO released a 20-page report, The Global Task Force on XDR-TB Update, on XDR-TB in southern Africa.

Dr Mario Raviglione, director of WHOs Stop TB Department, said there has been some progress in the region. "Things are moving, but it is far too slow for the seriousness of the epidemic," he told the Bulletin. Weyer agreed: "I dont see any sense of urgency from the health authorities in tackling the problem in the serious way that the situation deserves."

Another priority identified by the task force was for countries to conduct rapid surveys to find out the true extent of XDR-TB.

Rapid surveys to determine the prevalence of resistance to second-line drugs in patients considered to be at high risk have been done in Lesotho and Botswana. Similar surveys are planned in Malawi, Mozambique, Namibia and Swaziland in the next few months.

Madagascar, Mozambique and the United Republic of Tanzania are doing nationwide surveys of resistance to antitubercular drugs, while Angola, Lesotho, Malawi, Namibia, South Africa and Zimbabwe plan to start such surveys later this year, or in early 2008.

"For doctors on the ground the area most needing improvement is laboratory capacity, and perhaps surprisingly, IT [information technology]," said Dr Mark Sonderup, specialist physician at Groote Schuur hospital in Cape Town. "Patients are mobile, so they move around between hospitals and between primary and secondary care. Tests are often duplicated or are lost in the system. We really need a central database of TB patients."

In the rest of southern Africa laboratory facilities tend to be even worse than those in South Africa. Researchers visiting Lesotho recently found the countrys laboratory service was unable to diagnose drug-resistant forms of tuberculosis. FIND has sent technicians to help upgrade Lesothos laboratory facilities, and these should be up and running in a few months. The Open Society Institute, founded by George Soros, donated US$ 3 million to help health-care workers in Lesotho treat people infected with drug-resistant tuberculosis and HIV/AIDS more effectively. The funds will also go towards developing the first global treatment guidelines for this deadly combination of diseases.

An investigation by a team of epidemiologists, including WHO officials, into what happened at Tugela Ferry, started in March. Within a few months, it should be clear to what extent the epidemic arose out of poor infection control.

Could the epidemic in Tugela Ferry happen again? Weyer thinks so: "We are concerned that such outbreaks are happening all the time and are not detected. Deaths can be obscured by HIV and are not attributed to XDR-TB."

At the time of the Tugela Ferry epidemic, South African doctors had a limited drug armoury, as two of the nine antitubercular drugs were not available. However, the South African authorities have moved fast to ensure that capreomycin and para-aminosalicylic acid are now available.

But Raviglione cautioned: "Even if all the drugs are available, the important thing is to make sure these are delivered correctly, with patients counselled and supervised properly. In many areas basic TB control is lacking and if we dont have the basics in place, then the result is drug resistance."