Russian oblast is model in fight against TB

The chaos following the collapse of the Soviet Union in 1991 triggered a tuberculosis (TB) epidemic across the Russian Federation. A decade and a half later, the Russian "oblast" or region of Orel is reporting progress in fighting killer strains of Mycobacterium tuberculosis that are resistant to common TB drugs.

By the end of the 1990s, the tuberculosis epidemic had reached alarming proportions across the Russian Federation. Orel oblast, in the south-western part of the country, was no exception. "The TB situation in the region was very bad, especially from 1999 to 2000," said Dr Boris Kazyenny, chief doctor at Orel Oblast Tuberculosis Dispensary in the regional capital of Orel.

Kazyenny recalled how the supply chains of essential medicines for tuberculosis broke down and, with that, the quality of treatment.

"We didnt have enough essential drugs so we had to prescribe an incomplete course of chemotherapy and many patients did not adhere to the treatment regimen," Kazyenny told the Bulletin. "Thats why after the beginning of the 1990s, many of our patients did not make a full recovery and continued to transmit bacteria."

But amid falling living standards, mass migration and a crumbling health system after the 1991 collapse of the Soviet Union that resulted in drugs shortages, doctors in the Russian Federation had little choice but to administer ineffective and incomplete treatment.

In November 1999, the region introduced the World Health Organization (WHO)-recommended DOTS strategy and, in November 2002, it started implementing the DOTS Plus strategy to deal with drug-resistant tuberculosis.

"We introduced international diagnostic and treatment standards for the management of tuberculosis patients," Kazyenny said. "Thanks to all these measures, we managed to stabilize the tuberculosis epidemiological situation in Orel oblast. By 2006, incidence had decreased by 26.5%, mortality by 48.3% and prevalence by 44.5%."

Initially, Orel oblast received drugs for its DOTS and DOTS Plus programmes from WHO. Now the oblast pays for the medicines, which are free to all patients, Kazyenny said.

But the legacy of the dark days of the epidemic is still palpable, not least in the countrys high incidence of drug-resistant tuberculosis, estimated at 10% of total new cases in 2004, according to the 2007 WHO report, Global tuberculosis control: surveillance, planning, financing.

Multidrug-resistant tuberculosis (MDR-TB) is a specific form that occurs when the bacteria are resistant to the two first-line antitubercular drugs, isoniazid and rifampicin. Last year, WHO defined an even more resistant  and frightening  form: extensively drug-resistant tuberculosis or XDR-TB, which is resistant to isoniazid and rifampicin, as well as to any fluoroquinolone and at least one of three second-line injectable drugs: kanamycin, amikacin and capreomycin.

Resistant forms are more difficult to treat. While a normal course of treatment lasts up to about six months, treatment of drug-resistant forms can take as long as two years, while second-line medicines are more expensive, not always available and can produce severe adverse reactions.

Today, Orel oblast is achieving better results in fighting tuberculosis than many other parts of the country. Last year, 81% of newly detected sputum (matter coughed up from the lungs) smear-positive patients successfully completed treatment, just short of the Stop TB Strategy goal and Millennium Development Goal 6 to cure 85% of new sputum smear-positive patients. However, this is high compared with the Russian national average of 59% DOTS treatment success in 2004. 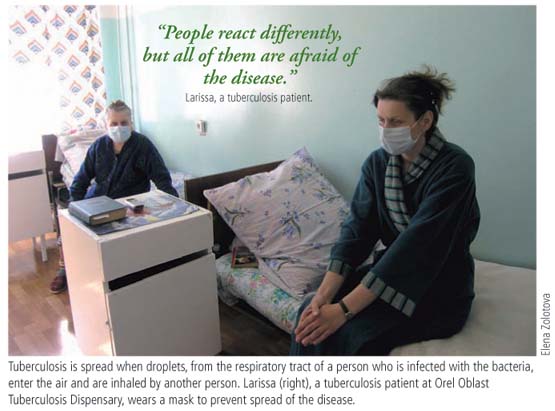 Detection has improved too. According to Kazyenny, 55% of new cases are detected by smear microscopy at general health system facilities across the Orel oblast. In contrast, the national average was 30% in 2004, according to the 2007 WHO report.

Kazyenny said that 78% of newly detected patients have MDR-TB, compared with an estimated 10% nationally. In 2003, there were 130 such patients in the region, but by 2006 that number nearly halved to 73. Recently, the number of resistant cases increased slightly, due to improved diagnostics. Last year, the oblast had just one patient with XDR-TB, who died.

Thanks to strict supervision of patients, social programmes for patients, and information campaigns for general practitioners and the public, Orel oblast has become a model of Russian tuberculosis control success. Recently, experts from the World Bank and the Global Fund to Fight AIDS, Tuberculosis and Malaria visited Orel to see what could be achieved in other parts of the country.

Treatment may involve taking multiple medicines several times a day for months. If patients are not closely supervised, many stop taking their medicine when they start to feel better.

But in Orel oblast, only 3% of tuberculosis patients fail to complete a full course of treatment. Kazyenny said that this "is less than in any other [Russian] region" because Orel has a strict system of monitoring patients.

"If a patient breaks off treatment, we contact his district TB doctor three days later and ask a local TB doctor to visit him. If the patient is unable to return to the dispensary, outpatient treatment is arranged," said Kazyennys deputy, Dr Elena Kiryanova.

"If the local TB doctor doesnt call back, we send our own representative. As a last resort, we report it to the local police who can visit the patient. Sometimes the appearance of a police officer is enough to make the patient resume treatment," said Kiryanova, deputy chief doctor for methodological and organizational work.

"We also have the right to apply to a court which can order obligatory treatment of patients who refuse to be treated, on the grounds they are dangerous to society," she said, adding: "But the more effective method is social support for tuberculosis patients."

Many tuberculosis patients are men with alcohol problems and a history of imprisonment, unemployment and homelessness. These and others receiving outpatient treatment also receive free food and hygiene parcels, and free train or bus tickets to come to the dispensary.

In collaboration with WHO, Orel oblast also plans to introduce incentives this year for medical workers to provide timely, proper and effective detection and treatment of TB patients. One of the greatest hurdles to detecting cases is not so much the failure of general practitioners but patients lack of awareness. Tuberculosis is heavily stigmatized in Russian society.

Larissa, a patient in her thirties, feared social exclusion after being diagnosed with tuberculosis when she was hospitalized with pneumonia. "I wasnt afraid of the treatment, but how would my family, my colleagues and other people react? That was the problem," she told the Bulletin.

Alexander, 20, another patient at the dispensary, underwent tuberculosis screening when he applied for a new job and was surprised when people were sympathetic. "Relatives, friends, no one showed hostility towards me when they heard I had tuberculosis."

Larissa confessed that although she was on the road to recovery, she was afraid of going home: "People react differently, but all of them are afraid of the disease".