New tools for an old disease

A range of promising new tools to prevent, detect and cure tuberculosis (TB), which kills some 1.6 million people globally every year, could soon be within reach. But more funding to feed the research and development (R&D) pipeline is needed if the reinvigorated fight against TB is to succeed.

An array of new  and a few recombined  compounds and methods hold the potential to revolutionize the way TB is prevented, diagnosed and cured.

Thanks to generous funding from donors, particularly the Bill & Melinda Gates Foundation, three publicprivate partnerships are among a number of groups working to develop a new generation of diagnostics, medicines and vaccines for TB.

Scientists are researching vaccines that have the potential to be more effective than Bacille CalmetteGuérin (BCG), which was introduced in 1921 and is still the only TB vaccine. Diagnostic tools are being tested that may detect TB in patients more quickly than those used today and that may be used in places where medical staff have little or no laboratory training. And candidate drugs that reduce months-long treatment regimens may soon be available.

"The new and exciting thing is that for the first time in decades we have a fairly robust clinical drug portfolio being tested," said Dr Melvin Spigelman, director of research and development for one of those publicprivate partnerships, the Global Alliance for TB Drug Development, known as the "TB Alliance". "But there is a tremendously high attrition rate in developing drugs. You never can count on any one drug or a handful of drugs to be successful. We need to set up a pipeline to continually feed the process."

Arguments for shorter drug treatment regimens abound. Currently, a full course of treatment means taking multiple medicines daily for about six months under the supervision of a health-care worker. Many patients break off treatment once they start feeling better. But failure to complete the full course has encouraged the development of bacteria that are resistant to common drugs, prompting the need for new drugs.

Shortening treatment would result in better patient adherence, reduced transmission of TB and less drug resistance, leading to fewer deaths. It could also save costs for patients and health services.

The not-for-profit TB Alliance has two drugs in clinical trials. Spigelman told the Bulletin that the aim is to produce a drug that reduces treatment duration from the current six-to-nine months down to four and, eventually, to two months. The long-term goal of the TB Alliance is to provide a drug that can cure TB in two weeks or less.

Among the TB Alliances most advanced candidates is moxifloxacin, which it is developing with Bayer HealthCare AG of Germany. The drug has been used for other respiratory tract conditions since 1999 and is now being tested for use against TB.

Dr Martin Springsklee, vice president of global clinical development for therapy area anti-infectives at Bayer, said that if phase III trials, due to start this year, are successful, moxifloxacin could be available as early as 2010 and could become the first new antitubercular treatment in almost four decades.

Springsklee said there was "no significant commercial value" in the project for Bayer, but that the company had a moral obligation to make any resulting TB drug available to developing countries at affordable prices.

Separately, the TB Alliance has developed an antibacterial agent, called nitroimidazole PA-824, with Chiron Corporation of the USA. The compound is now in phase I clinical development.

The TB Alliance has received around US$ 200 million from donors to fund its projects, including the Gates Foundation as well as the governments of Ireland, the Netherlands, the United Kingdom and the United States of America (USA).

New diagnostics are also desperately needed to speed up the detection of TB. The main method, sputum-smear microscopy, was developed in the 1880s. But this method can take four to six weeks to grow bacteria cultures capable of producing a test result and it is generally not performed on the spot. Results are not always accurate  particularly when the patient is co-infected with HIV  and skilled laboratory staff are not always available in the countries that are worst affected by the disease. These problems cause treatment delays and leave patients infectious. 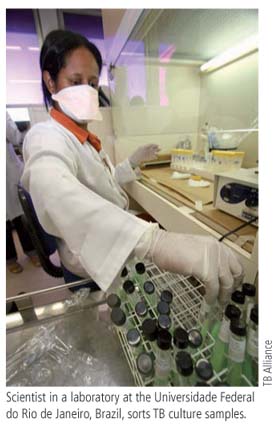 Another publicprivate partnership, the Geneva-based Foundation for Innovative New Diagnostics (FIND), was set up in 2003 with an initial US$ 30-million grant from the Bill & Melinda Gates Foundation. It already has four products for TB that have completed development and are now in the final phases of large-scale demonstration projects.

One is the Mycobacterium Growth Indicator Tube (MGIT) that FIND is developing with US-based Becton, Dickinson and Company. The MGITTB culture system permits the rapid growth and detection of TB bacteria, reducing average detection time from three-to-four weeks with solid egg or agar-based culture to 1014 days.

With Tauns Co. Ltd of Japan, FIND is developing Capilia TB, a strip test that confirms the presence of TB bacteria in cultures in 15 minutes. Both MGITTB and Capilia TB could be available at concessionary prices for the public sector of developing countries as early as 2008.

The other two tests in the FIND portfolio that have completed development are for drug resistance in smear-positive patients. One is the FASTPlaque-Response test, which FIND developed with Biotec Laboratories of the United Kingdom; and the other is the GenoType MTBDR test, the result of a partnership with Hain Lifescience GmbH of Germany.

FIND is also working with molecular and other technologies that are in earlier stages of development. "Our highest priority is to create simple and accurate tests that could revolutionize care by allowing TB detection at primary health-care centres," said Dr Mark Perkins, FINDs chief scientific officer.

Perkins cited a modelling study, commissioned by the Gates Foundation, that found that a test with only 85% sensitivity, if sufficiently simple to use, could get many patients on treatment at an earlier stage of their illness, saving an estimated 400 000 lives a year.

"Even at the microscopy level new testing could have a big impact," Perkins said. "Currently, microscopy misses more than half of all TB patients. The availability of a simple molecular test to pick up microscopy-negative patients could translate into many more patients detected early, saving resources, interrupting transmission, and saving lives."

Aeras Global TB Vaccine Foundation, another publicprivate partnership, is leading efforts to produce new vaccines for TB. Dr Jerry Sadoff, president and chief executive officer, said that this year six vaccine candidates have entered or are about to enter phase I clinical trials, while phase II trials could begin in 2008. Candidates that show high efficacy will move into phase III trials in 2010, with eventual licensing in 2014 of any that are proved suitable.

Of the six, one  a recombinant of BCG  is being tested by Dr Marcus Horwitz of the University of California, Los Angeles (UCLA) in the USA. BCG can prevent severe forms of TB in children, but is ineffective in protecting adults in countries where TB is common.

USA-based Aeras is backing clinical trials of two proteins used as antigens. One was developed jointly with GlaxoSmithKline Biologicals and is in phase I clinical trials. The other was developed by Dr Peter Andersen, vice president of Vaccine Research and Development at Statens Serum Institut in Denmark.

The three other Aeras candidates are viral-like vectors. One vector is being tested by a team from the University of Oxford in the United Kingdom, in healthy volunteers who are HIV positive. Aeras is involved in researching the two other vectors, one jointly with Crucell a biotechnology company based in the Netherlands, and the other independently.

"I am confident we will make a vaccine out of [one of] these six candidates that will be better than BCG and have a major impact on TB," Sadoff said.

"We need a new vaccine very badly because the one we have now is effective only in children. The other major problem is treatment, although effective, is prolonged and most people dont take their medicines properly," said Reichman, a senior adviser to the Stop TB Partnership and professor of medicine, preventive medicine and community health at New Jersey Medical School in the USA.

Interest in TB research waned during the 1970s and until the end of the 1990s, as TB was brought under control in industrialized countries. As a result, governments reduced R&D funding for the disease and pharmaceuticals companies deemed developing-country markets too small to justify substantial investment in TB products.

Then in the 1990s, TB epidemics swept the globe, including several countries of the former Soviet Union and New York City, and have been spurred by HIV/AIDS in sub-Saharan Africa. Since then, efforts by the Stop TB Partnership, the World Health Organization, donors and many others have returned the fight against TB to the world stage.

But more remains to be done. Dr Dermot Maher, senior research adviser in WHOs Stop TB Department, said that basic research was underfunded and that because of this, too few compounds were entering the R&D pipeline. Maher said funding for TB research is roughly one-tenth of that for HIV/AIDS.