Two rotavirus vaccines recently entered the market but to make a difference where they are most needed they must show efficacy and become affordable in developing countries.

By the age of three years, most children in the world have been infected with rotavirus.

In the developed world, many cases need nothing more than attentive treatment and rest at home, but in about 510% of cases children become so dehydrated due to gastro-enteritis they may need hospital care.

The picture is more grim in developing countries, where three-quarters of infants have had their first clinically serious rotavirus infection by their first birthday.

Worldwide, rotavirus accounts for an estimated two-fifths of all severe diarrhoea cases and causes up to a third of the 1.9 million deaths a year among under-fives due to diarrhoea. Ninety percent of these deaths occur in the developing countries, where access to lifesaving treatment is limited and where a vaccine would offer the best hope for preventing countless deaths.

Finding a safe and effective rotavirus vaccine has been a priority for the World Health Organization (WHO) in the 1990s. But the search got off to a false start. In mid-1998, Wyeths RotaShield was licensed for sale in the United States of America (USA) and rapidly introduced into routine childhood vaccination programmes. Within nine months, cases of vaccine-related intussusception, a serious condition that causes bowel obstruction, were reported among some one million children who had been vaccinated. The manufacturer voluntarily withdrew the vaccine and the US Advisory Committee for Immunization Practices withdrew its recommendation for its use.

It took several years for another rotavirus vaccine to reach the market in 2004, GlaxoSmithKlines (GSK) Rotarix, followed by Mercks RotaTeq in 2006.

A 2006 WHO recommendation indicated that the two vaccines could be introduced in regions and countries where they had been evaluated in clinical trials. This includes Latin America and Europe. Safety and efficacy data from over 63 000 infants tested with Rotarix showed that two oral doses conferred 85100% protection against mild-to-severe rotavirus infections respectively. Similarly, Merck has evaluated RotaTeq in a study population of 70 000 infants in Europe and the USA, and found that a three oral dose regimen prevented 98% of severe rotavirus cases.

In February 2007, Rotarix attained WHO pre-qualification status, a critical step for international procurement of the vaccine by United Nations agencies for poor countries, with the caveat that more data would be needed on the vaccines safety and efficacy for children in Africa and Asia before the vaccine would be recommended for global use. Merck expects RotaTeq will also receive WHO pre-qualification status in due course.

GSK and Merck are working with the PATH Rotavirus Vaccine Program to evaluate the vaccines efficacy in developing countries. Together with WHO and PATH, formerly known as the Program for Appropriate Technology in Health, GSK is doing an efficacy trial in Malawi and South Africa, while PATH and Merck are doing efficacy trials in Bangladesh and Viet Nam in Asia and in Ghana, Kenya and Mali in Africa. The resulting data, due to be available in 2009, could pave the way for routine immunization against rotavirus in Africa and Asia by 2010.

All this is good news, but for the vaccines to make a difference in developing countries, they must avoid the fate of hepatitis B vaccines, which entered the market in the 1980s at US$ 100 a dose and took 20 years to become affordable.

"Right now rotavirus vaccines are very expensive, and neither manufacturer has announced prices for developing countries yet," said Dr Manju Rani, regional focal point for new vaccines at WHOs Western Pacific Regional Office. "Based on the price offered in Brazil, Rotarix is US$ 7 a dose for a two-dose regimen. In some countries in WHOs Western Pacific Region that exceeds the total per capita spending on health, including donor money and government expenditure: US$ 35 a year in Cambodia and the Lao Peoples Democratic Republic, for example."

Fortunately for the worlds poorest countries, the GAVI Alliance, formerly known as the Global Alliance for Vaccines and Immunisation, is committed to providing financial support for rotavirus vaccines.

In November 2006, GAVIs board unanimously agreed to add rotavirus vaccines to GAVIs portfolio. "The pledge of support by GAVI demonstrates that the global community is moving quickly to save the lives of millions of children at greatest risk from rotavirus," said Dr John Wecker, director of the PATH Rotavirus Vaccine Program.

If countries have to procure the vaccine on their own for about 3% of the population that is newborn every year, the US$ 1 per capita cost is a huge expense.

"Rotarix is a very good example of GSKs business model of parallel availability, but we also need some help to make the vaccine affordable," said Dr Philippe Monteyne, the companys vice president for global vaccine development.

"Prequalification status with WHO will allow UN agencies to meet their goal of 85% coverage with a rotavirus vaccine by 2015. We will offer tiered pricing, so for example, the public market price in low-income countries will be less than one-tenth of the private price in developed countries," Monteyne said.

In October 2006, Merck launched a routine rotavirus vaccine programme in Nicaragua, in collaboration with the countrys Ministry of Health and WHOs Regional Office of the Americas, to supply universal coverage of newborns with RotaTeq for three years and conduct a cost-effectiveness study. 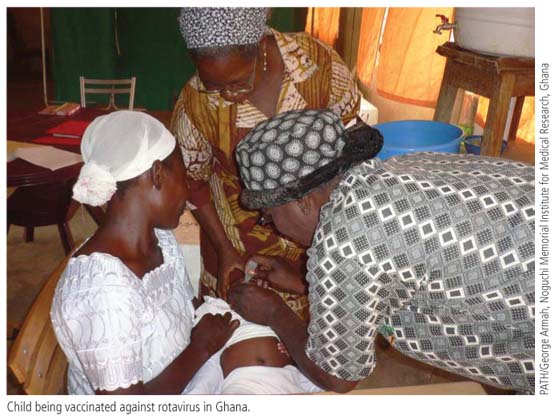 "One of the key issues is demonstrating that a GAVI-eligible country can successfully implement a vaccination programme with RotaTeq and have demonstrable success," explained Dr Mark Feinberg, vice president for policy, public health and medical affairs at Merck Vaccine Division.

The crucial task of surveillance is done through networks. Since its formation in 2000, the Asian Rotavirus Surveillance Network has generated and disseminated invaluable data on the percentage of children with rotavirus-caused diarrhoea admitted to hospital, as well as on the epidemiology and clinical features of rotavirus infection and the diversity of the strains circulating. Surveillance networks have been established in every WHO Region with support and funding from WHO, the PATH Rotavirus Vaccine Program and the US Centers for Disease Control and Prevention.

Surveillance includes the identification and characterization of the various rotavirus genotypes circulating in different regions and at different times, explained Dr Duncan Steele from WHOs Department of Immunization, Vaccines and Biologicals. "It is important to know whether the vaccines will have the same effectiveness against different rotavirus types and in different paediatric populations in different regions," Steele said.

Professor Lau Yu-lung, a principal investigator on one of GlaxoSmithKlines Asian trials, said it was essential to test the vaccines in parts of the region and in Africa, where there may be efficacy issues.

"There is uncertainty as to whether the vaccine will work in some Asian populations, as Asia is extremely heterogeneous in terms of economic development and genetic background," said Lau, who is also head of the Department of Paediatrics and Adolescent Medicine at the University of Hong Kong, Li Ka Shing Faculty of Medicine.

There is no doubt that rotavirus infection is a public health problem for both rich and poor communities, and that the advent of safe, effective rotavirus vaccines is important for controlling this infection and, in turn, preventing deaths from diarrhoea.

But Rani, of WHOs Western Pacific Region, said that these vaccines need to be used alongside other methods of reducing diarrhoea in infants.

"We still have to take care of the rest of the diarrhoea cases," said Rani: "Vaccination needs to be part of integrated childhood disease management that entails promotion of hand washing, breastfeeding and use of oral rehydration therapy, as well as the training of clinicians in the management of these diseases."