Beyond the paradise and prosperity of the internationally known tourist destination of Goa is another story  a high prevalence of mental health problems.

Goa, a tiny state on India's western coastline, is one of the country's most affluent and literate, but recent studies have highlighted a high prevalence of depression and stress-related problems, affecting 510% of young adults and 1525% of people who visit primary health centres.

The state launched a pilot project in October 2005 that takes an innovative approach to addressing depressive and anxiety disorders which are a major cause of mental health disability worldwide.

It is called Manas, which is short for mana shanti sudhar shodh meaning "search for mental peace" in Konkani, a local language in Goa, and draws on an approach developed by the World Health Organization (WHO) that is based on findings from studies in Chile, India and Uganda and on guidelines of the UK National Institute of Clinical Excellence. It relies on Sangath, a nongovernmental organization (NGO), to train local counsellors.

"Sangath's training of locally-recruited counsellors through the project is meeting an important need for psychological support and effective treatment among Goa's population and may provide a model which can be applied across India and other developing countries," said psychiatrist Dr Vikram Patel, who is leading the programme and based at the Sangath office in Porvorim near the Goan capital of Panjim.

Sangath is implementing the project in collaboration with the Goa state government's Directorate of Health Services and the London School of Hygiene and Tropical Medicine, with funding from the Wellcome Trust. The project was piloted at four primary health centres and four general practitioner clinics in Goa in 2006.

The intervention was extended to more primary health centres in March this year, when a randomized controlled trial to evaluate its clinical benefits and affordability also began. In its first phase, a total of 12 primary health centres are involved, with half receiving the full intervention. The second phase will be to evaluate general practitioners' practices that are also involved.

Patel, who is also the principal investigator, said that with 3500 participants, it was the largest trial of a programme providing a package of mental health treatments integrated into primary care in a developing country that he was aware of.

Recent studies by Sangath in Goa underscored the need for mental health care to be provided at primary health centres. The studies found that depression and anxiety disorders are common, particularly in young adults in the prime of their lives.

Sangath's studies found that one in five adults attending primary health centres and one in four mothers attending antenatal clinics in Goa suffer from depression.

Under the project, a team of screeners and counsellors are based at each primary health centre and general practitioner's practice. There, they screen patients on arrival with a questionnaire to identify those suffering from anxiety, stress or depression.

Manas-trained counsellors are not health professionals but local women university graduates, who have trained for three months to provide three treatments: psycho-education, interpersonal psychotherapy and yoga. They advise patients on how to deal with stress-related and social problems, and they keep a register of organizations that help women facing economic difficulties or domestic violence and make the appropriate referrals.

A diagnosis, for example of depression, must be confirmed by a doctor who supervises the whole process and is responsible for deciding whether to prescribe anti-depressants.

"One of the wider goals of the project is to create awareness against irrational use of vitamins and injections," said Dr Neerja Chowdhury, a psychiatrist, adding that Manas doctors avoid over-prescribing drugs, such as sleeping pills, which can be costly for patients and  in cases of mild depression  unnecessary.

After confirmation of the initial diagnosis by the doctor, the patient is introduced to a health counsellor who, in confidential, private sessions, will explain how interaction between body and mind creates physical symptoms linked to anxiety or depression.

Counsellors teach patients how to deal with sleeplessness  a typical symptom of depression  through yoga breathing exercises and advice on better nutrition. Many patients improve with simple lifestyle interventions such as these, Patel told the Bulletin.

The programme has transformed some patients' lives. "Within two weeks I felt better and began to look at life differently. Talking to someone who understood and had knowledge of how to deal with such problems has made a big difference to me," said Sadhna, aged 35. 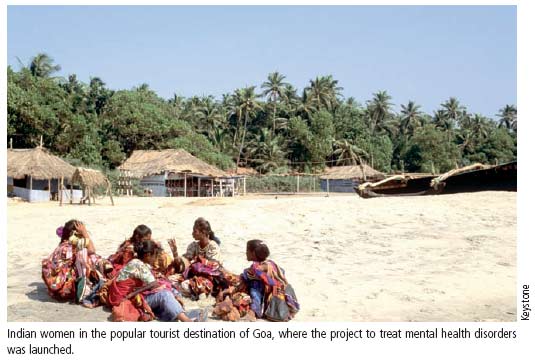