Uganda's rapid response to the recent fatal Marburg haemorrhagic fever outbreak not only stopped the spread in its tracks, but also raised hopes the discovery of the disease's reservoir, possibly in a bat-infested jungle mine.

The news reached Dr Sam Okware via a text message from the United States Centers for Disease Control and Prevention (CDC). "Marburg virus isolation confirmed by CDC lab in Atlanta. More later", read Okware, a senior epidemiologist and commissioner of health services at the Ugandan Ministry of Health.

The 30 July confirmation was, at that time, the latest in a chain of actions initiated by Ugandan authorities to contain what investigators suspected was a rare outbreak of Marburg haemorrhagic fever.

The disease emerged in two labourers who worked at a gold and lead mine in the western Ugandan jungle. One miner died on 14 July, while the other remains in quarantine. The two are the outbreak's only confirmed cases.

Within hours of the CDC message, Ugandan Minister of Health Dr Stephen Mallinga issued a statement to Parliament. Uganda's health services director-general, Dr Sam Zaramba, issued another to the public through the media. On 9 August, Mallinga announced that the outbreak had been contained, but added that disease control activities would continue until the end of the month.

The World Health Organization (WHO) helped in the control effort through its Global Outbreak Alert and Response Network (GOARN) and the recently updated International Health Regulations (IHR), which led to neighbouring countries being alerted of the outbreak's threat. WHO also dispatched a team of experts to Uganda to help in the control and detection of the disease reservoir.

"There is acceptability of WHO's capacity to respond (to outbreaks) in compliance with the International Health Regulations", said Dr Melville O George, WHO country representative for Uganda. "So there was no need for panic."

Besides quickly containing the outbreak, WHO investigators believed they were close to discovering the outbreak's reservoir, a first in the history of Marburg fever. "We believe the chances are very good, but we need to undertake more studies to be sure", Dr Pierre Formenty of WHO's Epidemic and Pandemic Alert and Response (EPR) told the Bulletin during an interview in Kampala.

The hunt for the fever's host shone suspicion on 5 million bats, plus rats, ticks and other wildlife, living in and around the mine in the Kamwenge district of western Uganda's Kikasi Forest Reserve. One of the two miners was known to have skinned a colobus monkey. An infected monkey sparked the fever's first-recorded outbreak in a laboratory in the German town of Marburg in 1967. One line of investigation is to assess what link, if any, exists between the host creatures and primates, who do not survive exposure to the virus, and infected humans. Monkeys are often used as a source of food by humans in the Ugandan jungle. 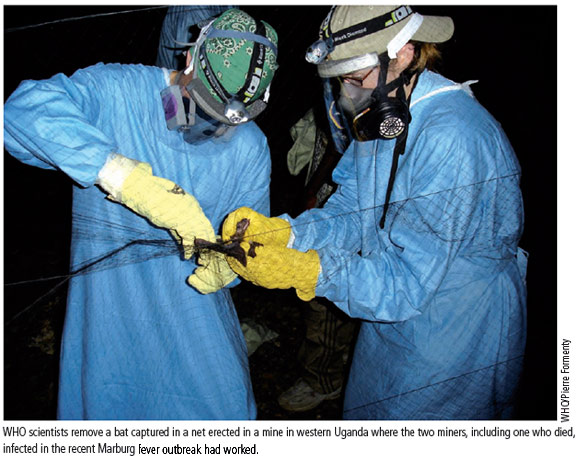 Marburg virus, from the same family as Ebola, produces symptoms such as severe haemorrhaging, diarrhoea, nausea, vomiting, and chest and abdominal pains. Contact with bodily fluids of infected people during health care or burial procedures increases the risk of transmission. The disease is confined to a few African countries and the deadliest known Marburg outbreak killed nearly 250 people in Angola in 2005.

The latest outbreak emerged on 28 June near the Kitaka mine site in Kamwenge. A 29-year-old miner rushed a workmate to a clinic who had been displaying fever and bleeding from all orifices of the body.

The sick miner, aged in his early 20s, was referred the next day to an area hospital and on 1 July was sent to Mulago National Referral Hospital in the Ugandan capital, Kampala. About a week later, the man was discharged from hospital after recovering.

But his friend was not so lucky. After his workmate was discharged, the 29-year-old miner visited a Kampala clinic suffering from similar symptoms and died days later. Ugandan authorities sent blood samples from the dead man to CDC, and acting on the suspicion that they had a disease outbreak on their hands, began searching for the miner who had recovered.

During the search, investigators learned that two weeks before the younger miner had fallen sick; he had skinned a colobus monkey. The monkey's hide was traced to a Kampala suburb and sent to CDC Atlanta for analysis. The miner was eventually found heading back to his village, some 200 kilometres from Kampala, before being isolated and placed under observation. Investigators started identifying all people the two miners had come into contact with and placed them in isolation for 21 days, the length of Marburg fever's incubation period.

An outbreak taskforce was established, comprising experts from both the Ugandan Ministry of Health and Wildlife Authority, as well as WHO. Police officers joined with village council and district leaders to ensure compliance with quarantine orders. Experts are conducting tests at the mine and on the bats, rats and other creatures living there. The link, if any, between the wildlife at the mine and the outbreak has not yet been determined, but investigators are sending samples of the bats and other creatures to CDC for testing.

WHO's George said 55 suspected contacts had been isolated in Kampala together with another 58 miners in Kamwenge. The mine's owner said the site had been closed for decades before reopening earlier this year, George added.

The mine owner also told investigators that there had been past cases of people falling ill and dying from fever and haemorrhaging, according to Okware. The "strange" undiagnosed disease would kill up to four people before burning out on its own. 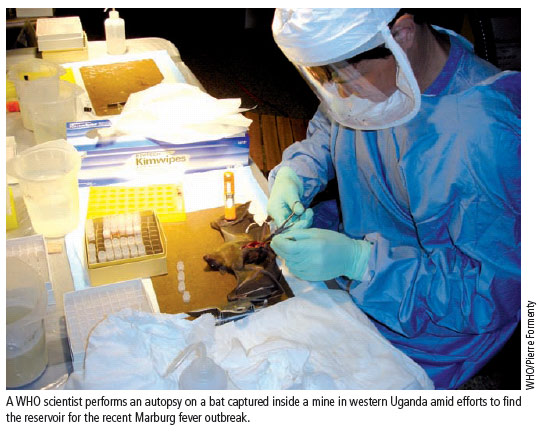 Formenty, of the EPR team, praised the response to the outbreak, saying it demonstrated the heightened vigilance in controlling the spread of diseases in Uganda, which has witnessed outbreaks of Ebola and Marburg fevers in the past.

"The Ugandan response was very transparent and what struck me was the openness of the Ministry of Health and how it worked with WHO, the international community and the media to deal with the outbreak", Formenty said. "We have been working with Uganda for a long time and it is clearly one of the most advanced countries for IHR implementation."