Satellite technologies are a natural ally in public health emergencies for tracking the extent of disease outbreaks and natural disasters. Jeremy Wagstaff explains why they have only become really useful over the past 10 years.

When former UN secretary-general Kofi Annan was seen leaving a conference in Geneva in November 2005 clutching maps of the south Asia earthquake disaster, it was evidence that satellites  as a key weapon in humanitarian emergencies  had arrived.

In the hours and days after the October 8 quake struck killing more than 73 000 people and injuring some 150 000, experts from France, Germany, the United Kingdom and the United Nations scrambled to gather and interpret images data from satellites to assist rescue workers on the ground from local authorities to nongovernmental organizations (NGO), like Télécoms Sans Frontières.

The maps (which can be seen at http://www.disasterscharter.org/disasters/CALLID_110_e.html) compare the terrain before and after the disaster, and pinpoint the location and impact of landslides. Such photos, says Maarten Meerman, a satellite designer at MacDonald Dettwiler in Vancouver, Canada, would be detailed enough "to spot flooded roads, burning forests, washed out railways, etc." 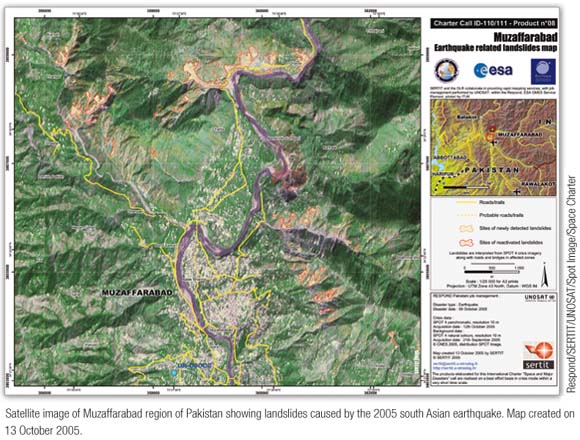 "These relief crews and aid workers  with their boots knee-deep in mud and their laptops under plastic bags for protection from the rain  got the damage maps and reported that the information was useful," recalls Philippe Bally, an earth observation specialist from the European Space Agency (ESA) and a member of the secretariat of the International Charter "Space and Major Disasters", a seven-year-old commitment by 10 space agencies to provide satellite-based data to countries affected by disaster.

This vote of confidence, he concluded, was "a clear message when it comes from the end user". But it was the sight of Annan emerging with maps of the disaster that struck home for Bally, who through the Charter helped coordinate obtaining the images and their interpretation by experts from an ESA project called GMES RESPOND. "Those maps," says Bally, "were the results of a huge effort from the Charter alongside value-adding partners working on satellite data to extract thematic information."

Great advances have been made in space technology in the past decade, and these advances have become useful for addressing humanitarian crises. The chief of these, as the Pakistan earthquake illustrates, is using satellites to obtain images of a disaster zone quickly, so that rescue workers can focus their efforts where they are needed. But there are other uses of satellites: as a way to predict and monitor the spread of communicable diseases; as a simple means of communication when land-based systems have failed; and as location and navigation aids when Global Positioning System  GPS  units locate and track public health information. In the outbreak of Rift Valley fever in Kenya (20062007), for example, GPS units were used to link surveys to an actual place on the earth, according to Carl Kinkade, enterprise Geographic Information System (GIS) coordinator for the United States Centers for Disease Control and Prevention (CDC).

ESA is collaborating with the World Health Organization (WHO) to establish a European user-driven Telemedicine via Satellite programme. Telemedicine is the use of information technology to deliver medical services or information from one location to another. The programme will aim to provide telemedicine services, such as delivering medical care and treatment via satellite, and, for WHO, a key element is training health workers in how to use such health technologies in their work. WHO has already trained health workers in how to use satellite images in 20 countries.

The Satellites For Epidemiology (SAFE) pilot project, for example, is part of that collaboration. According to SAFE coordinator Audrey Berthier, of the Institut de Médecine et de Physiologie Spatiales (MEDES) in Toulouse, France, the SAFE project attempts to answer the question: how good are satellites for providing early warning of disease outbreaks? To explore this, SAFE conducted a training exercise in November 2007 on the Greek island of Crete (http://www.esa.int/esaTE/ SEM7DK73R8F_index_0.html).

The exercise assumed that damage from an earthquake was widespread and that the conventional, terrestrial communications infrastructure had been destroyed. The rescue operations had only one means at their disposal that had not been affected by the imaginary quake  a satellite. Response teams were tested on their reliance on the satellite for communications, but on the second day the satellite was also used by doctors to deal with an epidemiological threat that was also conjured up as part of the scenario.

Those involved are currently assessing the results of the exercise, but the ESA has already concluded that "the SAFE pilot project is a good illustration of the added value of satellites  with the service provided by space answering the needs on the ground."

Indeed, satellites have been a natural fit to measure the spread of disease and its potential for more than a decade, according to Norman Kerle, an assistant professor at the Netherlands International Institute for Geo-Information Science and Earth Observation. The resolution of satellite imagery doesnt need to be too high to track and interpret details, such as land cover and temperature changes, especially when coupled with analytical, visualizing and reporting GIS software. Think locust swarms devouring vegetation in remote parts of Algeria, or the spread of malaria, which John Haynes, a researcher at the National Aeronautics and Space Administration (NASA), says laid low one-third of United States of America (USA) personnel involved in peacekeeping in Liberia in 2003. Research presented at the American Society of Tropical Medicine and Hygiene annual meeting in November 2007 showed that such diseases can be predicted based on weather, seasons and other factors visible from space. "Ebola outbreaks," Haynes points out, "tend to occur at the end of the rainy season or after a seasonal peak in vegetation density." 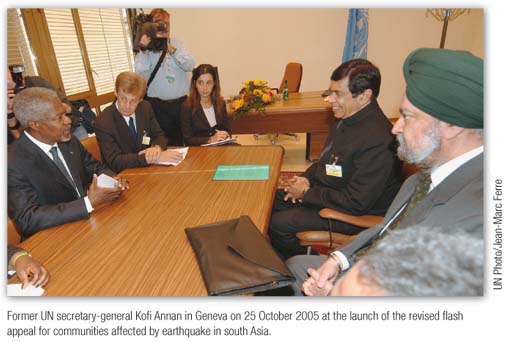 Satellites are obvious tools for assisting in such emergencies, but its only in the past decade that theyve really been useful. Before that, says Kerle, their resolution wasnt good enough, especially for urban areas. The other problem, he says, is that satellites are expensive, meaning theyre either owned by governments or by companies that, naturally enough, want to make money from them. A final problem is the fact that satellites cant be everywhere at once: geostationary satellites sit over one spot and can cover a whole hemisphere  great for meteorological satellites, but at approximately 36 000 kilometres from the surface of the earth they cant offer very detailed pictures. Those in orbit over the poles are much closer to the surface  between 500 kilometres and 800 kilometres up  but usually only pass over the same place every 16 days.

Thats why the Charter is so important  if agencies pool their satellites they can cut the response time down so their data are useful to people on the ground. But a rapid response is still counted in days rather than in hours, meaning that, today, initiatives like the Charter are only able to provide timely support for part of the emergency response actions that disaster management users are requesting. "Acquisitions (of images)," says Bally, "often come too late because there are not enough satellites." That hasnt stopped the Charter responding to more than 140 requests for help.

Satellites, indeed, cannot always be counted on. Cloud cover, for example, prevented the CDC from getting images during the Ebola outbreak in Uganda in 2007, according to Kinkade. And whether good or bad, people have a touching faith in the all-seeing power of the satellite, if the Charter web sites logs are anything to go by: "The webmaster," he says, "has often received the desperate request: Can you find my lost family?" a plea, Bally notes in sadness, that "satellite data by themselves cannot meet."