Primary health care programmes have faltered across much of Fiji due a shortage of health workers and funds among other factors. Senior health official Dr Jona Senilagakali recently returned to the village selected to launch primary health care in the island nation in 1978. Johnety Jerety, who accompanied him, reports.

Nacanieli Sosenabarari has welcomed many changes in his village these past 30 years. Like the rest of his community at Natogadravu, about 30 kilometres from Fiji's capital, Suva, Sosenabarari, now in his 60s, no longer lives in a thatched, bamboo hut, but a modern house made of iron and concrete. He no longer draws his drinking-water from the potentially polluted nearby river; these days it comes from a tap in his house, which also has a water-seal flush toilet. Refuse previously left strewn about the village is now deposited in communal bins.

These improvements in basic amenities, which have helped to improve the health of villagers, stem from the enthusiasm with which the village embraced primary health care back in the late 1970s, after Fiji signed up to the 1978 Declaration of Alma-Ata of "health for all" by the year 2000. Following a series of South Pacific regional seminars in 1977 involving the World Health Organization (WHO) and the United Nations Children's Fund (UNICEF), Fiji decided to take a village-based approach to primary health care.

Like many countries at that time, Fiji hoped to overcome a lack of resources by galvanizing community involvement to improve health across its 100 or so islands that are today inhabited by a population of 848 000 people.

Dr Jona Senilagakali, who was the country's Permanent Secretary for Health at the time, said in 1980 during an interview with WHO's former publication, World health magazine, that this grassroots commitment "from village people who want to improve things in their known village for their own reasons" was Fiji's key to achieving health for all.

The village of Natogadravu was at the forefront of those early efforts to bring primary health care to Fiji's villages and remains a model for others in the island nation, showing what strong leadership and active participation by all community members can achieve.

Primary health care initiatives have reduced sickness and fatal disease in the village, Sosenabarari says. "The number of people dying has decreased and not too many people are sick now compared to the olden days."

Fellow elder Saimone Rokotunidau, in his 60s, has also seen the benefits flow from primary health care initiatives. "We have our aid post and a village health worker and there is no need for us to go to Suva to get treatment for minor injuries  that is taken care of in the village," Rokotunidau says, referring to Fiji's capital.

Natogadravu chief Semi Matalau says that the village development committee has been instrumental in achieving improved health and living conditions.

"If the committee comes up with a suitable development idea for the village, we discuss it and then call a village meeting where everyone can take part, including our elders who have the final say on most occasions. So it is more of a community decision than the committee taking the decision themselves."

Elsewhere in Fiji, however, primary health care results have been patchy. Promising early developments lost momentum in many villages. Last year Senilagakali was interim Health Minister, since January of this year he has been Medical-Officer-in-Charge of the Army Medical Scheme. He blames this stagnation on, among other things: poor government policy and a lack of central support to the villages, inadequate resources and monitoring from central government; and a "brain drain" that has resulted in a shortage of doctors and nurses.

Senilagakali says the primary health care project reached most communities throughout Fiji when it was launched. But in the 1980s, many initiatives stalled. "We didn't have enough doctors and nurses or even aid workers to work with the communities," he says.

He says poor government policy was the main reason why Fiji was unable to achieve the WHO health-for-all target by 2000. "After I left my post, the government did not schedule workers to go to all communities in all the islands to monitor the project and health workers were not encouraged to work more with the communities to improve their health standards." 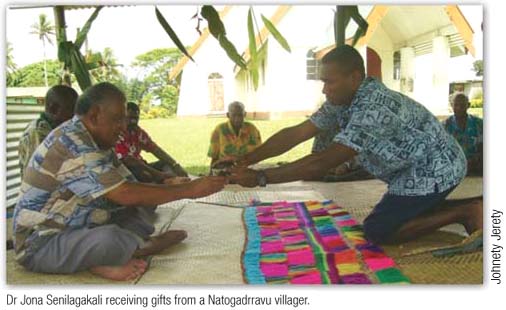 The government was short-sighted when it handed over ownership of the Fiji School of Medicine to a South Pacific regional institution in 1995  a move that transformed it into a centre that serves the whole region, Senilagakali says. "When it was administrated by the Fiji government, every graduate had to work for government services and they were paid by the government. If that system had been maintained, Fiji would have had enough doctors and the health services and primary health care programmes would have achieved that 2000 target. Now the ministry of health has no power over the school and our nurses and doctors can go anywhere to work. Because of that decision, Fiji is still short of qualified doctors and nurses and will remain so in years to come."

While he was in charge of Fiji's health portfolio last year, Senilagakali tried to put primary health care back at the top of the agenda. He is unshaken in his belief that community decision-making and participation are crucial to primary health care success.

Dr Josaia Samuela, Fiji's National Adviser on Family Health, also believes that the primary health care campaign in his country has not been a success. "There is no proper monitoring of the health standards in the communities or villages. I think 7080% of the population has access to health services but only 40% has access to quality health services. 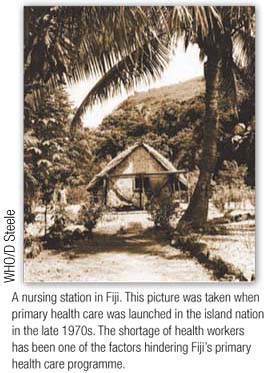 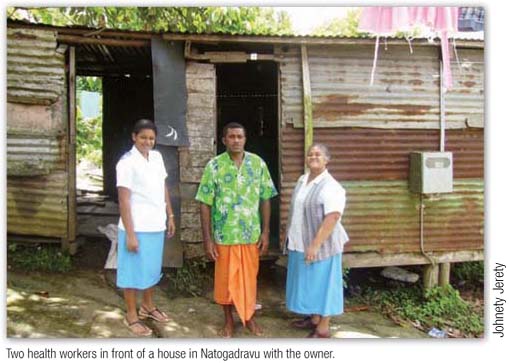 "Health has improved very slowly since the 1970s, but not to the minimum standard expected. Even some of the villages just a few kilometres from Suva do not have proper water infrastructure. Valenitina village, which is a kilometre from Suva, doesn't have a proper water supply. They depend mainly on water from the well or rainwater, and as a result, they experienced a typhoid fever breakout (in 2007).

"In the 1970s the clinics started with one nurse or doctor but if you look at it now, there are not enough staff to take care of everyone. We have to add another one or two staff, more resources, to reflect population increases. There are health workers in almost every village but those places that don't have village health workers are left behind because they are the ones who educate people on primary health care.

"More centralized resources and community aid should be made available. Other stakeholders, like the ministries of health, Fijian affairs, provincial development, agriculture, fisheries and land, have a role to play in primary health care," Samuela says.

"The government has to adjust now in order to deliver good health to the people to a required standard. It must create the environment to deliver the goods. What is the use of having a vision of health for all without providing adequate resources?"

Samuela says most Fijians are aware of the importance of primary health care to their lives but many still practise poor hygiene. "I think it is more than ignorance. There is a need to provide support. Consider the inequality in funding and support many of our rural people suffer. A whole village may share one tap. Without improving their social infrastructure, how can we expect them to change their behaviour? It is a complex issue."

"We found many of the villages we went to have no village committees and they are left with very poor health standards compared to the villages that have proper committees to make decisions and manage their village."