A new Thai forum consults the public on the government's health agenda. The challenge will be to incorporate these diverse views into public health policies. Apiradee Treerutkuarkul reports.

For Dr Suwit Wibulpolprasert, chairman of the committee organizing Thailand's first National Health Assembly (NHA), which took place from 11 to 13 December 2008 in Bangkok, opening up the debate on public health is an essential part of developing effective national policy. "In the past, health policy has tended to be drawn up by politicians and officials," Wibulpolprasert says. "But the National Health Assembly is a forum for the public to pool views and initiate health agendas that truly address people's needs."

More than 1500 people attended the conference, the first of its kind to take place since the passing into law of the National Health Act of 2007, which also brought the NHA into existence.

A broad cross-section of Thai society was represented, including 178 delegations from government agencies and provincial authorities, the private sector and civil society. In addition, groups including stateless people living near the Myanmar border gave presentations at technical briefings for participants. Dr Kumanan Rasanathan, from WHO's Department of Ethics, Equity, Trade and Human Rights, described the meeting as "a very interesting exercise in participatory governance".

The 12 topics that were up for discussion were distilled from more than 68, including such familiar ones as universal access to medicines and equal access to basic public health services. Also addressed were matters as diverse as agriculture and food prices in the current economic crisis and safe media access for youth and family - an agenda that included a proposal for addressing problems of children addicted to online games and television.

"The broad slate of topics reflects the intention to encourage input from everyone," says Rasanathan, "and improve public participation as well as intersectoral collaboration." In other words, the assembly's organizers actively encouraged the participation of stakeholders from outside the field of public health - from education, agriculture and industry, to name but a few.

"The Thais have adapted much of the machinery of the World Health Assembly [WHO's supreme decision-making body] for their own context," says Rasanathan, who noted that each of the 178 constituent groups had equal speaking rights. Briefing papers were produced and resolutions were passed on each of the agendas. As with WHA resolutions, these resolutions are not binding.

Given the hurdles that still need to be cleared once a resolution is passed at the Assembly, one might be forgiven for dismissing the body as something of a talking shop.

This is a charge that Wibulpolprasert firmly denies. He is convinced that NHA-formulated resolutions will certainly lead to policy, and policy that is closer to the needs of Thailand's 63 million people.

For Jutamas Paengwieng, a 22-year-old university student representing a network of children and youth, just to be included in discussions about national public health is a major step forward: "Children and youth have never been able to participate in the problem-solving process with adults," she says. "The National Health Assembly is the first forum that lets us be involved in seeking solutions to youth problems. It's a starting point for young people like us to work as a network with adults to create better policies suitable for our way of living." 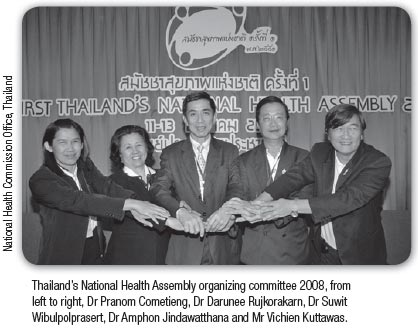 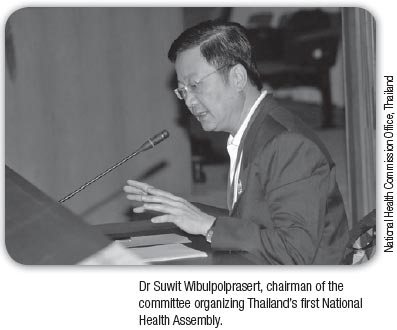 Wibulpolprasert and his colleagues looked to Brazil's experience in developing policy in this way. Dr Sarah Escorel, senior researcher at the National School of Public Health at the Oswaldo Cruz Foundation in Brazil, points out that community participation through a national health assembly has been part of Brazil's political system since 1986, involving 100 000 people in 5000 municipal health councils, 27 state health councils and the national health council.

Brazil took the process to the next level in 2004 with a National Conference on Science Technology and Innovation in Health that resulted in a health research agenda. The sheer size of community involvement presented challenges as well as opportunities, as Escorel well remembers. "It's very difficult to come up with any resolutions as opinions from different groups of people are so diverse, leading to difficulties in the implementation process," she says.

Escorel, who was also a member of the Social Exclusion Knowledge Network of the WHO Commission on the Social Determinants of Health, recommends that Thailand's NHA closely follow the policy-making process to ensure that workable health legislation is the final result.

Wibulpolprasert concedes that turning NHA resolutions into policy will be a challenging task and says that a working committee will be set up to follow up on the policy implementation process. Progress will be reviewed at the assembly on an annual basis.

How can we make the Bulletin more interesting and relevant to your work?

We are keen to hear your views. Please fill in our short readers' survey at: www.who.int/bulletin