Prevention is better than cure

As in many parts of the world, child sexual abuse in Swaziland is widespread and goes largely unreported. Swaziland is one of the few low- and middle-income countries to have acknowledged the problem. Mantoe Phakathi reports.

"He started inviting me to spend the nights with him when my mother was at work," recalls Ntombi (name changed), a Swazi now in her mid-twenties who was raped by her father on a routine basis from the age of twelve. "He said if I said anything to my mom, he would kill me. He said he would protect me from her beatings." The weekly violations went on for a period of seven years until Ntombi finally got help from a teacher.

Aberrant as the case may seem, it is by no means unusual in Swaziland as revealed by a 2007 study carried out by the United Nations Children's Fund (UNICEF) in association with the Centers for Disease Control and Prevention (CDC) in the United States of America. The purpose of the study was to describe the epidemiological distribution of sexual violence against young girls in this country of just over one million people. The results were chilling. "Approximately one in three females experienced some form of sexual violence as a child, nearly one in four experienced physical violence, while three in 10 experienced emotional abuse," says Dr Jama Gulaid, representative of UNICEF in Swaziland. 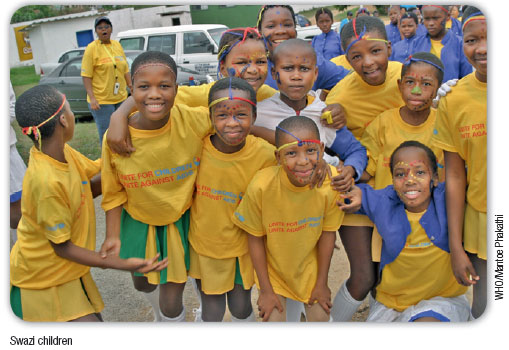 "It is important to point out that child sexual abuse is a global problem," says Dr Alexander Butchart, from the Department of Violence and Injury Prevention and Disability at the World Health Organization. "Even in high-income countries, it is estimated that more than one in five females experienced some form of sexual abuse as a child, and one in five children have experienced severe parental physical abuse.

"While not unique in having a high prevalence of child sexual abuse, Swaziland is exceptional in being one of the few low- and middle-income countries in any region to have so fully acknowledged and thoroughly investigated the epidemiology of child sexual abuse as a basis for prevention," Butchart says.

The study revealed that boyfriends and husbands were the most frequent perpetrators of sexual assault, while non-sexual physical violence was typically meted out by male relatives (not including victims' fathers). Emotional abuse typically came from female relatives. Sexual violence most frequently occurred in the victim's home or the home of a friend, relative or neighbour. "There are only a few cases of children who get raped in the bushes or in areas far away from home by complete strangers," says Ncamisile Gwebu, a child protection officer in the Hhohho region in Swaziland.

As is the case with rape all over the world, underreporting was a factor, with less than half of the incidents of child sexual violence being reported to the authorities. Remarkably, however, the primary reasons the victim did not report in this study were: fear of abandonment, a desire to protect the perpetrator or lack of awareness that what she had experienced was in fact abuse.

Not that they were unaffected by their experiences. According to Ndo Mdlalose, a clinical psychologist based in the capital Mbabane, the victims typically suffer from depression, panic attacks and anxiety, though the adverse effects are by no means limited to emotional and behavioural problems. "Child maltreatment has also been associated with broader health issues such as diabetes, ischaemic heart disease, sexually transmitted diseases and a variety of health risk behaviours including smoking," says James Mercy, from the Division of Violence Prevention at the CDC.

Swazi children subject to abuse find themselves isolated at many levels, an isolation which is often self-imposed. "Typically, they blame themselves rather than the perpetrators for what has happened," says Mdlalose. There is a tendency to suffer in silence. Those children brave enough to seek professional counselling make do with the two psychologists responsible for the needs of the entire country.

Of course, ideally, these children should never be exposed to the abuse in the first place, which is why Mercy believes that prevention is the key to dealing with the issue. He cites the USA-based Nurse-Family Partnership as an example of what can be done in this regard. "The programme provides regular house calls to low-income, first-time mothers from the start of a pregnancy through the child's infancy," Mercy says, adding that the programme not only seeks to prevent child maltreatment of all kinds (physical, sexual, emotional and involving neglect), but also to improve prenatal health-related behaviours, the care of infants and toddlers, and economic self-sufficiency in the household.

Another programme singled out for mention is known as the Triple-P or Positive Parenting Programme, which includes professional training for paediatricians and child welfare case workers, combined with media and communication strategies. "The promotion of safe, stable and nurturing relationships between children and those responsible for their care is a crucial part of these initiatives," Mercy says. 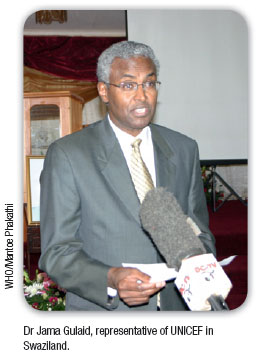 Because violence against children is associated with other problems such as sexually transmitted infections and mental illness, integrated approaches that address common underlying risk factors have also enjoyed some success. UNICEF's Gulaid points to the Schools as Centres for Care and Support (SCCS) programme, which seeks to make schools in five African countries safer and more conducive to learning. "Prevention of HIV and violence is one of the priority areas of every SCCS school," he says. UNICEF has also helped establish the Girls' Empowerment Programme, a concept borrowed from Zimbabwe where it is implemented as part of efforts to prevent violence against girls and, as a secondary outcome, to reduce HIV infection.

The lot of Swaziland's children would also be improved by a more proactive judiciary, but on that front, much remains to be done. According to Nomzamo Dlamini, the child protection programme manager at Save the Children Swaziland, the judicial system is characterized by inertia and a lack of focus on this issue. "Many sexually violated children are denied justice because cases take too long to go through the system," she says, pointing out that not only do plaintiffs become discouraged, but evidence is lost in the protracted intervals between the incident and the hearing.

UNICEF and other partners are working to assist the government with technical and financial support in drawing up a Sexual Offences and Domestic Violence Bill but, here too, progress has been painfully slow - the past 10 years resulting in a series of drafts but no final document. Despite good cause for frustration, Dlamini sees reasons for hope. For one thing the government has established a children's court where child-friendly facilities allow victims of rape to talk freely without having to confront their alleged assailant. "The victim sees the perpetrator through the CCTV [closed circuit television] because they normally freeze and fail to talk if they come into direct eye contact with the person who sexually violated them," Dlamini explains. She also praises the Domestic Violence and Child Protection Unit in the Swazi police force. "Victims are taken to a 'safety corner' where they are able to talk about their experiences to trained police officers," she says. These police officers are also trained to provide basic counselling and can refer victims of abuse to organizations that will promote further counsel. 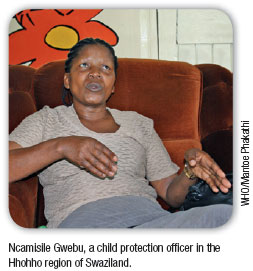 Ntombi would no doubt have benefited from such support. Instead she waited seven years to go to a teacher to get help. The teacher told Ntombi's mother who in turn confronted her husband. He apologized and said that he had been "tempted by the devil". "That was the end of it," Ntombi says. Ntombi can never get those seven years back. But, by changing attitudes, rolling out child maltreatment prevention programmes, encouraging victims to speak out and introducing unequivocal legislation, the Government of Swaziland can do a great deal to prevent other children from going through a similar nightmare.