A United Nations treaty prohibiting the use of children in hostilities has been ratified by 126 countries, but at least 250 000 child soldiers are currently involved in armed conflicts worldwide. The United Nations Children's Fund (UNICEF) and its partners struggle to repair the damage. Gary Humphreys reports.

They are recruited to act as fighters, porters, cooks, messengers, spies and sex slaves. They are often forced to bear arms and participate in killing. But the physical and psychological harm done to so-called 'child soldiers' is not limited to the combat zone. The collapse of civil society resulting from protracted conflicts and the unchecked abuses of marauding militias expose children to a range of health risks from cholera to malnutrition; from deliberate mutilation to perhaps a lesser known consequence of their deployment in conflict - sexual abuse.

"Most of the girls returning from these conflict zones have experienced extensive sexual violence," says Pernille Ironside, a child protection specialist working with UNICEF, who recently returned from a four-year posting in the Democratic Republic of the Congo (DRC), where sporadic fighting has been going on since 1998. "We are talking about systematic rape often accompanied by mutilation over extended periods, sometimes years. Over 200 000 women and children have been raped since the onset of the conflict." According to the United Nations, between June 2007 and June 2008, in Ituri province in eastern DRC, 6766 cases of rape were reported - a number which probably represents only a fraction of the assaults taking place. Of these reported cases, 43% involved children; girls for the most part but also boys. The psychological trauma resulting from these experiences is accompanied by an elevated risk of sexually transmitted infections, notably HIV/AIDS. Traumatic fistula, the rupturing of tissues caused by violent sexual assault, is also widely reported. Obstetric fistula is also a problem. "We see many girls who are too young to give birth requiring surgical procedures," says Dr Robin Nandy, senior health adviser for emergencies at UNICEF's Health Section in New York.

Such injuries, along with the plethora of blunt instrument trauma, stabbing and gunshot injuries that result from violent combat, are the tragic staples of war-zone pathology, but they are not the only dangers child soldiers face, in the more than 15 countries where children are used in conflicts, from Afghanistan to DRC, Sri Lanka and the Sudan. "When one thinks of health needs in a conflict situation - and this applies to children and adults - there is a tendency to think of war injuries," says Nandy. "But it's important to recognize the threat posed by psychosocial trauma and common diseases in crisis situations - diseases like malaria, cholera and yellow fever, exposure to which results from the breakdown of social systems and increased vulnerability that occur in conflicts, especially when they are prolonged. A child that gets sick in a war zone does not get the treatment he or she might otherwise receive." 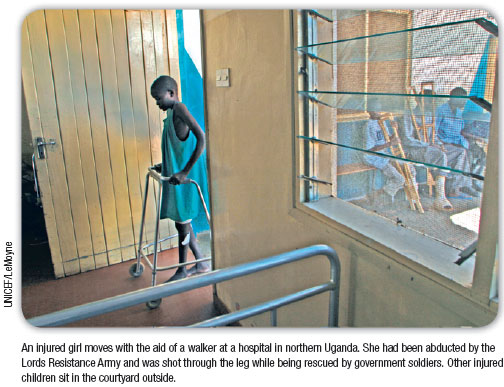 When children enter a UNICEF transitory care centre, they soon receive a general medical check-up followed by treatment where indicated. In DRC, the centres are designed for a three-month stay, and are often the children's first contact with normality after their horrific experiences. "Generally speaking [the children] are not arriving wounded," says Ironside. "They may have the scars of bullet and knife wounds, but these have usually healed." Hair-raising cases of fistula or mutilation aside, the principal damage done is psychological.

Because of the numbers of children needing help - in the Goma transitory care centre in eastern DRC there are currently around 250 - it is not possible to work exclusively one-on-one, so the children have been grouped into 'families' of 30 or so, each group with a separate dormitory and assigned staff counsellors. The children, who come from different ethnic backgrounds and armed groups, are deliberately mixed. "The families are there to listen and to support one another, they deal with a range of issues from grief to outbursts of violence," Ironside says. While reintegration into the community and establishing their own autonomy are important parts of the children's rehabilitation, individual counselling is also provided, particularly to those with specific disorders or behavioural issues.

There is no data on just how effective this approach is, although both Nandy and Ironside say they have seen dramatic results. But the truth is UNICEF and its nongovernmental organization (NGO) partners are doing the best they can with inadequate resources. "Effective rehabilitation is extremely expensive and takes a long time," points out Dr Alexander Butchart, in the Department of Violence and Injury Prevention and Disability at the World Health Organization (WHO). Three months of group rehab is the best these children can hope for.

And after the three months are up? Where possible, children are returned to their families and communities to begin the long road back to 'normal' life. And it is here that many face the biggest challenge. "These children have often lost their families and so have no network of support, no way to make a living, nothing," says Obonyo Tom Fred, director of the Agoro Community Development Association in Agoro, a war-torn rural community in northern Uganda that has been devastated by 17 years of almost continuous civil and tribal conflicts. "It is so hard for them," says Obonyo. "I have heard some say they were better off in the war zone." To point them in the right direction, in 2003 the Agoro Community Development Association started working with RESPECT International, a Canadian NGO that links refugee communities with online volunteers from the United Nations Volunteers programme. One of the fruits of this association is a computer resource centre that today gives IT training to students with a view to creating work opportunities later on. 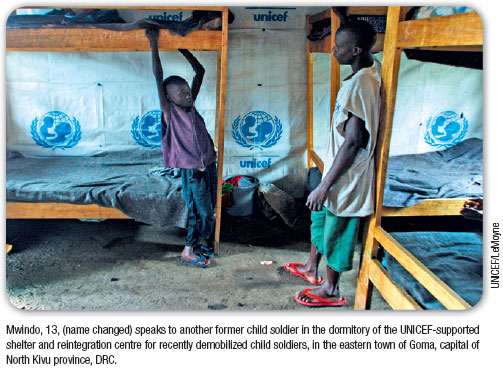 Encouraging life skills and economic autonomy is also a key aspect of UNICEF's rehabilitation and re-integration efforts. "We provide support to get these children back to school or into vocational training or work," says Ironside. These activities take place in local communities and include other vulnerable children, not just former child soldiers, to promote a sense of community and reduce stigmatization. Children who successfully complete a vocational training receive a start-up kit, for example in dress-making, carpentry or hairdressing, to help them along the long road to recovery, reintegration and independence. A kit to put a shattered life back together? "The kit is but one component of support and follow-up provided to these children. I have witnessed transformations," says Ironside.